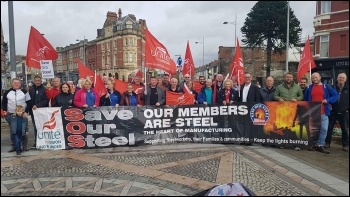 Tata has announced the closure of the Orb works, which has been making steel in Newport for over 100 years, with the loss of 380 jobs. The company claims the plant needs £50 million of investment to make it viable. Orb makes specialist electrical steel which now more than ever will be needed for the production of electric vehicles.

Steve Turner, assistant general secretary of the union Unite, pointed out that workers there inherited their jobs and that now we must pass them on to future generations of steelworkers in the city. It is crazy to destroy these jobs, these skills and this plant just as the economy should be transitioning to an electrically-powered one. He called on the Tory UK government to intervene to save the plant.

Delegations of steelworkers from Scunthorpe, Llanwern, Port Talbot, Shotton, Runcorn and many other areas brought solidarity to the Orb workers, which summed up the threat to the whole British steel industry. As Steve Turner pointed out, the British economy cannot function without a large manufacturing sector. And a manufacturing sector cannot function without a strong steel industry.

Community, the steel union, has put forward a plan to upgrade the plant so that it can produce steel for electric vehicles and use steel from Port Talbot. It would require £30 million funding from the UK and Welsh governments, with just £10 million net funding from Tata.

The plan shows how an integrated steel industry plan can be developed by the trade union movement. But we cannot rely on the vagaries of a multinational global giant like Tata to control what happens. The Welsh government should be intervening to nationalise Orb and bring it back into public ownership, demanding that the weak Tory UK government steps in to save a vital industry for British society.