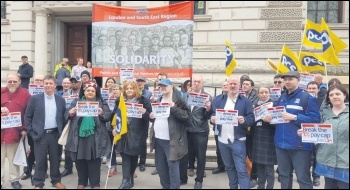 The ballot of the PCS's almost 200,000-strong membership is significant because the left-led PCS is widely recognised as one of the most consistent, outspoken critics of the government's austerity programme. It is also seen as a leading exponent of action against government attacks.

PCS has been transformed into a fighting, campaigning and democratic union under the leadership of the Democracy Alliance - an alliance between Left Unity (which includes Socialist Party members) and the PCS Democrats.

PCS is a democratic union. Its leadership is elected annually and the union's policies are agreed by the PCS annual conference.

The union has withstood these attacks, and its Democracy Alliance leadership will not be deflected from doing what is necessary to protect members' interests and more generally defend the interests of working people.

The ongoing fight against the pay cap, office closures - mainly in the Department for Work and Pensions and HM Revnue and Customs - and job cuts is set to be the major immediate issue facing the union. The scale of the challenges PCS faces is huge. A strong, determined leadership is crucial.

It is vital that Democracy Alliance is returned to lead the union and defend members' interests. We call on members to vote for Democracy Alliance candidates. And we call on all socialists and activists who are serious about fighting back against the Tory austerity programme to join PCS Left Unity.