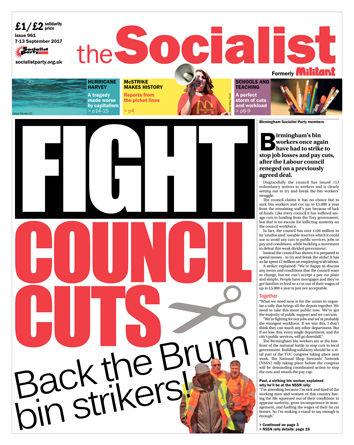 Birmingham’s bin workers once again have had to strike to stop job losses and pay cuts, after the Labour council reneged on a previously agreed deal

Historic McStrike: if we don’t get it, shut it down!

Tories and Blairites behind ‘light touch’ industry regulation: The old adage “there’s a sucker born every minute” should be updated to every 20 seconds – after Britain’s gambling industry was again revealed to be exploiting vulnerable people in order to increase profits

Reverse all the cuts now!: A damning UN report has criticised the government’s attacks on disabled people in Britain. It states legislation has “failed to recognise living independently and being included in the community as a human right.”

It’s one world for the super-rich, and another one for the rest of us including landlords and slums, billionaire profits for rail bosses and fare rises for us and student debt.

What we think: Trade unions will converge on Brighton this week for this year’s annual TUC Congress at the end of a summer which has seen a wave of strikes – many in defence of living standards

Teachers’ unions must fight to reverse disastrous Tory education policies: Schools return this week for a new academic year with the usual mix of emotions but with the prospect of budget cuts lingering in the background

The Labour mayor of Bristol, Marvin Rees, has called an ‘anti-austerity march & rally’ in conjunction with Bristol People’s Assembly and Bristol Labour Party on Saturday 9 September

“Get out of our town and take your racism with you,” was one of the messages hurled by shoppers at the small contingent of English Defence League (EDL) members trying to stage a demonstration in Keighley, Yorkshire

Ineos, the largest shale gas exploration company in the UK was granted an interim injunction against anti-fracking protesters on 31 July

Non-fiction review: Pride: ‘Pride’ tells the story of Lesbians and Gays Support the Miners (LGSM). The group struggled alongside miners and their families in south Wales during the 1984-85 strike

‘Let the producers of wealth unite – and what can withstand them?’

Non-fiction review: Six for the Tolpuddle Martyrs: Every year thousands of trade unionists descend upon the small village of Tolpuddle in Dorset to commemorate the struggle in 1832 of farm workers to form a union