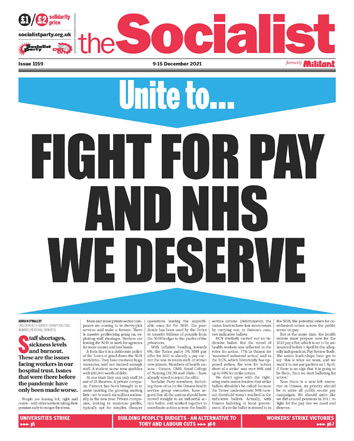 Building People’s Budgets: An alternative to Tory and Labour cuts

After a year like no other, which has seen record-breaking heatwaves and wildfires ravage towns and lead to thousands of hectares of land being destroyed, British Columbia (BC), Canada, has faced yet another historical disaster in the form of unprecedented floods

On 1 December the US Supreme Court began hearing arguments about a Mississippi law to ban abortions after 15 weeks, even in the case of rape and incest

Universities strike – build the action and stand united to win

Supermarket giant Tesco is set to be hit by a series of strikes at its distribution centres in the run-up to Christmas.

560 Stagecoach bus workers across South Yorkshire, members of Unite, have completed a week of strike action in pursuit of an above-inflation pay rise

The impending passing of the ‘Police, Crime, Sentencing and Courts Bill’ has raised a question among some activists that its list of restrictions on the right to protest will, in effect, mark the end of protest in the UK

‘The Harder They Fall’ is a new Western on Netflix. The movie sets are stylised and the gunfights are majestically choreographed. But the film also stands out for its all-black cast, something that is