Strikes and protests spread across Europe

For a 24-hour all-Europe general strike

This is an extract from a statement of the Committee for a Workers International, in preparation for a European day of action on 29 September. It was published on 24 August. See socialistworld.net for the full statement.

The European Trade Union Confederation has called an international day of workers’ action for 29 September. The coordinated protests, action and general strikes, have the potential to shake the continent.

The Committee for a Workers’ International (CWI) [the international organisation which the Socialist Party is part of] will work enthusiastically to mobilise workers and youth to take action on the day, under the banner of international struggle and solidarity, against Europe’s axe-wielding governments and the dictatorship of the capitalist markets.

The attacks implemented across the continent in most cases represent the most brutal austerity programmes implemented in living memory. The devastating ‘slash-and-burn’ policies of the Greek Pasok government, ‘in return’ for its ‘bailout’ from the coffers of the European Central Bank and the International Monetary Fund, have meant dramatic attacks on the already impoverished Greek working class.

A real cut of between 30% and 50% in public pensions and public-sector wages slashed by between 25% and 30% have been emulated in Spain and Portugal.

In Portugal, where workers receive among the lowest wages in Europe (with a monthly minimum wage of only €475), public sector workers are being hit with a four-year pay freeze and a raising of the retirement age to 67. 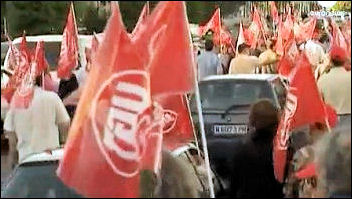 In Britain the Con-Dem coalition government has announced a package which includes attacks on social benefits and savage cuts of 25% or more in every area of public spending. Angela Merkel’s coalition government in Germany is set to slash €80 billion in the next four years.

Greece has recently been the epicentre of developments in Europe. However, as well as the near collapse of its state finances, it is the tidal wave of struggle – with six general strikes in 2010 – that has put it at the centre of developments. This has aroused the fighting instincts of workers around the continent.

Massive strikes and demonstrations have been seen in France where two million took to the streets to defend pensions. Italy, where a general strike against the government took place in July, is braced for a significant national demonstration on 16 October organised by the FIOM, a metal workers’ union, which has led the way in putting forward a militant strategy in fighting attacks on wages and conditions.

On 29 September Spain will be shaken by its first full general strike in response to the devastating crisis that has left over four million unemployed and to the anti-working class reaction of its government (see box).

However, in most countries, the cowardly role of the majority of trade union leaders, in refusing to organise an effective struggle, means they still stand as a brake on the development of a decisive response by the working class to capitalism’s austerity offensive.

The forces of the CWI in these countries struggle uncompromisingly against the ineffective strategy of the conservative right-wing trade union officialdom to meet the attacks faced by the working class and youth. They are seeking to build an opposition to these leaders which can counterpose a programme of militant action.

In a number of countries, working class militants have already made crystal clear their desire to escalate the fightback with general strikes. In Portugal, a wave of strikes and mass demonstrations, including one of over 300,000 on 29 May, has indicated the ripeness of the situation for a general strike to force back the Socrates government from its austerity offensive of massive cuts and privatisations.

An enthusiastic call for Portuguese workers to join their Spanish brothers and sisters in a mighty Iberian general strike, would undoubtedly be met with a massive response, and represent a momentous step forward, uniting workers across borders in militant action.

Working-class militants in Greece, including the comrades of Xekinima (CWI in Greece), also demand that trade unions announce their joining up with the Spanish workers in battle on 29 September. A similar mood exists in France; after two union-organised ‘days of action’ this year, a massive day of strikes and protests is set to take place on 7 September. A real general strike of the public and private sector represents the next step forward for the struggle against the Sarkozy government’s anti-working class reforms.

The pressing need for working class internationalism is also posed by capitalism’s attempts to stoke up nationalist and divisive sentiments. They serve the purpose of attempting to distract attention away from their brutal attacks.

Strikes and protests on 29 September should be undertaken with the perspective of further developing such action and with the objective of building for a 24-hour all-Europe general strike. Such a strike would shake the foundations of European capitalism and immeasurably strengthen the confidence and determination of workers and youth in the fight against the austerity offensive, posing concretely the alternative of international solidarity and struggle to the misery on offer by European capitalism in crisis.