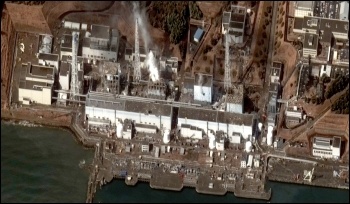 Fukushima I courtesy of Digital Globe   (Click to enlarge)

The earthquake off Japan's east coast and the giant tsunami wave that followed on 11 March has, at the time of writing, officially killed over 8,500 people with another 13,000 people still missing. Hundreds of thousands of survivors have been left homeless, many are without basic human needs, including food. On top of this tragedy the tsunami also crippled the ageing nuclear power station in Fukushima, triggering a major nuclear crisis.

As the following articles show, the ongoing nuclear disaster has been compounded by the failure of a profit-driven, privately owned energy company and a pro-nuclear energy government, both of whom failed to plan for such a contingency. And despite the nuclear catastrophe in Japan, big business and the Con-Dem government continues to promote a new generation of nuclear power stations in the UK.

With each passing day the environmental disaster at the stricken Fukushima nuclear power plant in Japan becomes more alarming. High levels of radioactive steam and materials have been spewing out of the damaged reactors and are carried by winds over large population centres, including Tokyo to the south. Already, milk and vegetables produced from areas some distance from Fukushima contain radioactive iodine above legal limits and other cancer causing substances.

A British nuclear scientist who is advising the Japanese authorities told the Times: "There could reach a point where we could have to leave the plant to evolve on its own."

Nothing as frightening as this has occurred since a reactor at the Chernobyl nuclear plant in the Ukraine exploded in 1986. That incident led to an estimated 4,000-60,000 extra cancer deaths.

The doomed Fukushima plant, which houses six nuclear reactors, was severely damaged by the earthquake and giant tsunami on 11 March which devastated a huge swathe of Japan's north east coastline.

Attempts by the plant's owners - the Tokyo Electric Power Company (Tepco) - and the Japanese authorities to prevent the escape of radioactive gases and materials have, so far, failed. This is despite the heroic efforts by workers at the plant and firefighters to stabilise the situation.

The Japanese government has responded by imposing a 12 mile exclusion zone around the site. But TV news reports have shown hospital patients and staff abandoned by the authorities within this quarantine area. Meanwhile, the US administration told its citizens in Japan to stay outside a 50 mile zone. The UK foreign office told British citizens in the Tokyo area to consider leaving.

Tepco and the Japanese government have continually played down the scale of the disaster, as the head of the US Nuclear Regulatory Commission, Gregory Jaczko, has publicly stated.

The disaster has revealed both the inherent flaws in the reactors at Fukushima - which were designed by the giant US company, General Electric - and the falsification of the site inspection records by Tepco.

The Economist described Japan's nuclear industry as "a shameful record of cover-ups, lackadaisical crisis management and an inbred complicity between regulators and utilities..." (17/3/11).

Above all it shows that profit-driven capitalism and suspect technology is a deadly combination. 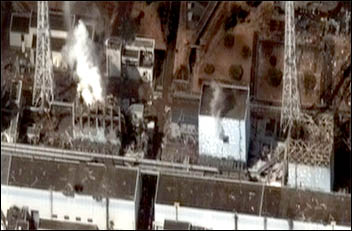 A series of blackouts being imposed by the Tokyo Electric Power Company (Tepco) is causing confusion and seriously disrupting the lives of people in the metropolitan (Tokyo) area.

These 'planned blackouts' are on an unprecedented scale. Public transport, hospitals, schools, day nurseries as well as ordinary homes are all affected by the rolling cut-offs of electricity for three to six hours a day, apart from central Tokyo where the central offices of the government and the big monopolies are situated.

The blackouts have provoked large-scale resentment amongst the population in the metropolitan area and also widespread criticism of Tepco and the government who have arranged them. The policy appears to be promoting the idea that 'nuclear power is essential to our lives after all'.

The International Atomic Energy Agency has pointed out that it is actually possible to supply sufficient power with the other thermal power plants in Japan even if all of the country's nuclear power plants were shut down. The blackouts start to look like a big conspiracy to impress people with the necessity of nuclear power, even after this horrific man-made disaster.

The chaos of the power cuts has exposed the incapacity of the electrical industry to care for the needs of the people. Not only Tepco, but all the electricity and power generating companies should be taken into public ownership under democratic workers' control and management. This is the key to changing the nuclear power-oriented policy which does not care about people's health and lives but serves the interests of big business.

Despite the unfolding nuclear catastrophe in Japan, bosses in the UK nuclear power industry are determined to press ahead with the building of five new nuclear power stations with at least ten new reactors, costing a staggering £50 billion.

Vincent de Rivaz, chief of French multinational EDF, is confident that the construction of plants at Hinkley Point, Somerset, and Sizewell, Suffolk, will proceed. His enthusiasm "was undimmed". Neither is his enthusiasm for the profits to be made along with selling plants to China and India.

The programme was drawn up by the previous New Labour government, after a u-turn by Tony Blair's cabinet and his then energy secretary Ed Miliband.

In 2007 Huhne said: "Nuclear is a tried, tested and failed technology and the government must stop putting time, effort and subsidies into this outdated industry."

Since getting his backside onto a cabinet seat he became a cheerleader for the nuclear power building programme "as part of the mix". Reportedly, officials in Whitehall are privately trying to reassure energy firms and their contractors that the nuclear programme is not under threat.

Huhne, like some environmentalists, believes that the threat of climate change means that 'carbon neutral' nuclear power has a role to play.

In contrast, the German chancellor Angela Merkel, faced with mass demonstrations and with elections looming, has shut down seven of Germany's oldest reactors.

She told the German parliament: "When, in Japan, the apparently impossible becomes possible and the absolutely unlikely reality, then the situation changes." Indeed.

There are regularly earthquakes in Britain (very small ones) and there have been tsunamis (a long time ago) but there are also increasingly violent storms and floods. Nuclear reactors in Britain aren't necessarily immune from a natural disaster. In any case the two most serious nuclear disasters - Three Mile Island and Chernobyl - weren't caused by natural disasters but by technical failures within the plant.

In the deregulated energy sector can you trust cost cutting, profit hungry multinationals to avoid all technical failures?

The question of how to safely store long term nuclear waste (for tens of thousands of years) has still not been resolved despite many decades of debate. Big business refuses to foot the bill.

When things go wrong it is workers, like those firefighters in Japan, who heroically risk their health and their lives to try to prevent a catastrophe.

The thousands of workers in the nuclear energy industry have a vital role to play in the (horrendously expensive) decommissioning of old plants, the safe treatment of toxic waste and the development of alternatives.

And for a safe, clean, alternative energy programme we need the working class to make decisions, not pro-big business politicians.

Fight all cuts: for a 24-hour public sector general strike

We can stop the cuts!

No education cuts: We can win the battle!

Want to fight the cuts? Join the socialists!

Little to laugh about in 'Carry On Cuts' budget

Stopping the cuts with the NSSN

Mass non-payment - how the poll tax was beaten