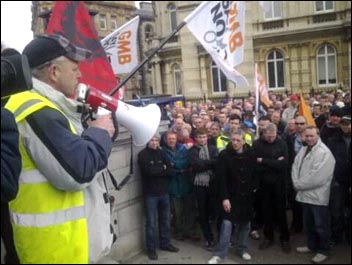 In a magnificent show of determination and solidarity, at 6am on Monday 28 March, 800 construction workers and other trade unionists assembled outside the gates of the Saltend con­struction site near Hull.

Many of the workers there were still recovering from the journey down to London and back on the previous Saturday to protest against the gov­ernment’s vicious cuts agenda.

But another early morning was needed as 400 construction workers have been locked out of the site by the contractor Redhall for nearly a fortnight.

Delegations from West Burton, Nottingham­shire, Pembroke in Wales and other construction sites, joined the mass picket.

Representatives of the West Burton site re­ported that all other workers on their site had downed tools on that day in solidarity with Sal-tend workers. 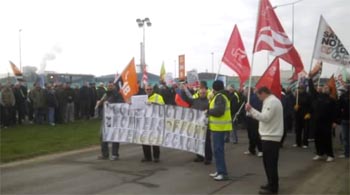 At midday, over 1,000 trade unionists, includ­ing public sector workers, joined the demonstra­tion in the centre of Hull to support the locked-out Saltend workers and to protest about the cuts.

The protest was addressed by speakers from Unison and NUT representing public sector workers, as well as Keith Gibson from the Saltend Lock-out Committee and NSSN convenor Rob Williams.

The site is owned by Vivergo Fuels, who have closed the site “for a period of assessment”. Red-hall offered the workers £3,000 each in redundancy pay last week, but this was refused as workers vowed to prevent their national agreement NAE-CI from being undermined.

This payment offer has been increased to £3,300, but the workers are standing firm.