From The Socialist newspaper, 28 September 2011 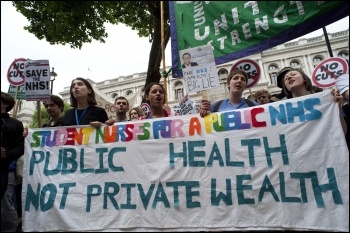 PFI was begun in the early 1990s by the then Tory government. It was attacked by Labour when in opposition, but then massively accelerated under Tony Blair and Gordon Brown's governments. Today there are hundreds of PFI projects covering hospitals, schools, roads, bridges, police stations and prisons.

Instead of a public body building a new facility using public money, albeit through a contract with a private builder or developer, PFI involves a private sector developer or consortium doing the whole job. It borrows the money (often at higher rates of interest than the government would), builds the project and then charges a fee for 25 to 40 years for maintaining the buildings and usually also providing various services.

Labour spokespersons such as Patricia Hewitt and Alan Milburn condemned such PFI projects as 'backdoor privatisation' when in opposition. In government, however, as health secretaries, they claimed it was the 'only game in town'. And curiously, after government, they (and many other Labour ex-ministers) got lucrative private sector jobs and consultancies, many in the same areas where they had been ministers.

The Financial Times estimated in 2007 that, after ten years of New Labour, the total capital value of PFI contracts across the UK was £68 billion - but that the total which would be given to the private companies involved in those contracts, by the time they were finished, would be £215 billion!

Three years later, in November 2010, the total payment obligation for PFI contracts in the UK had rocketed to £267 billion. And in the first year of the Tory/Lib Dem coalition a further 61 PFI schemes, with a capital value of £7 billion were approved. PFI has become a 'milch cow' for big business in the public sector.

One of the projects said to be at risk is Walsgrave Hospital in Coventry. 20 years ago Coventry had two main hospitals, which would have cost £30 million each to refurbish to modern European standards. But the Tories' friends in the construction industry couldn't make as much profit from refurbishment, as they are doing from PFI.

Supported by both Tory and Labour politicians, our two hospitals were demolished and a new PFI one, on the outside edge of the city, was designed for £174 million. But by the time it opened, six years ago, the capital cost had shot up to almost £400 million. The same pattern was followed in many other PFI projects.

The British Medical Association doctors' organisation had already warned that PFI debts were "distorting clinical priorities" and impacting on the treatment given to patients, well before Andrew Lansley. They used Walsgrave Hospital as a prime example.

Four years ago the BBC reported how the then chair of the BMA consultants' committee had explained, even before Coventry's PFI hospital had actually opened, that the NHS Trust had had to borrow money to make the first year's £54 million payment, and then had to take further action mothballing services, closing wards and not using all the new hospital's operating theatres.

Since then, the annual payments to the PFI consortium for Walsgrave Hospital have risen to £64 million, and there's decades still to go. The eventual cost of this hospital is reckoned to be over £3 billion!

PFI is a national scandal. And while PFI is in existence, the payments to the private contractors are legally the first draw on an NHS Trust's budget; that means there will inevitably be cuts in hospital spending so that the PFI shareholders can continue to make their profits.

PFI should be ended, and all the projects brought back into the public sector, under democratic and accountable public control. If not, our children will still have the responsibility of paying profits to the children of PFI shareholders for decades to come.

Mass strikes can kick out Con-Dems

Marching for a future

Join the Jarrow marchers on their 330 mile journey!

Why are you supporting the march?

What I spent my EMA on

Socialism 2011: A weekend of discussion and debate

My impressions of the Work Programme

Standing up for our pension rights