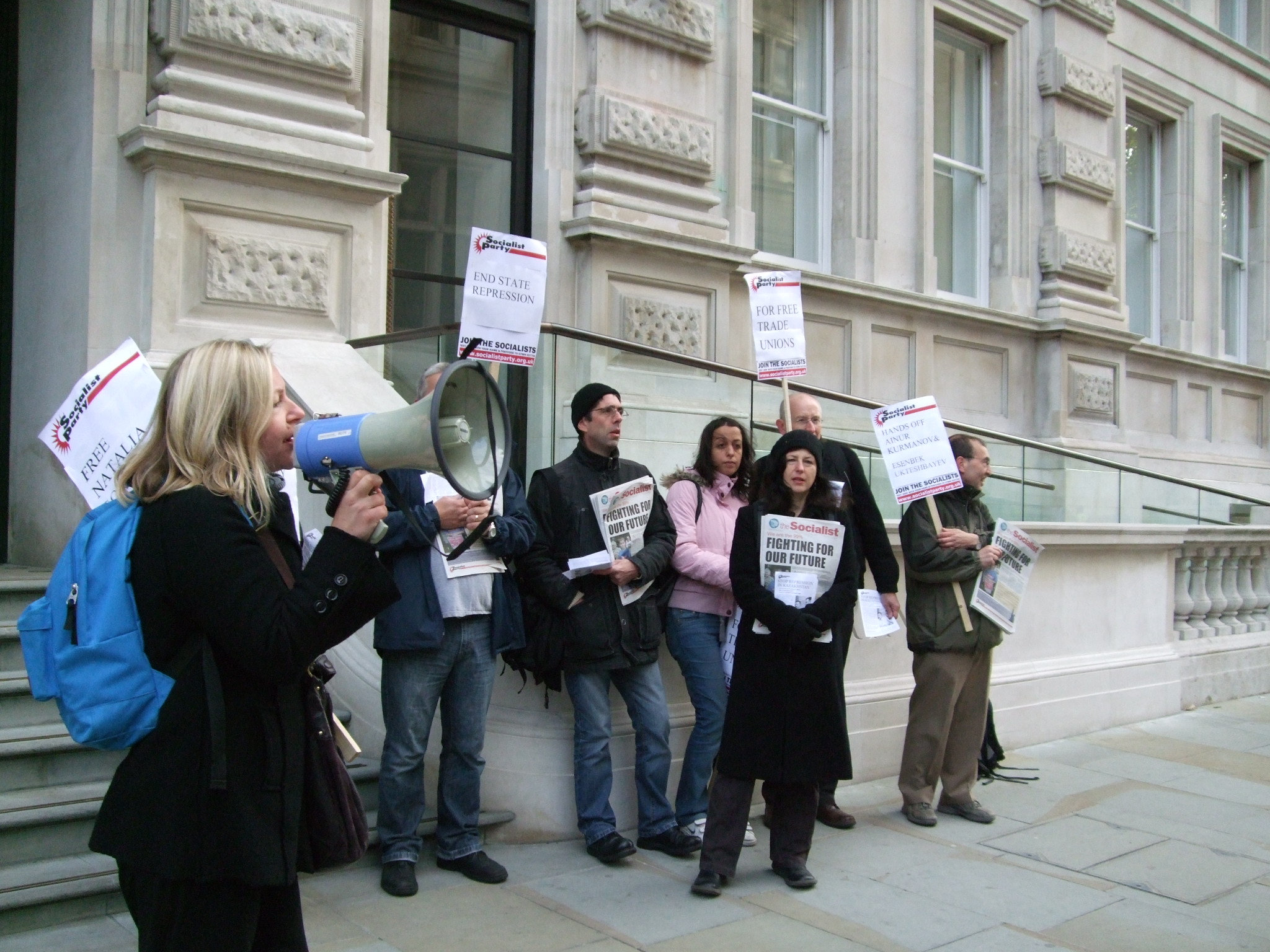 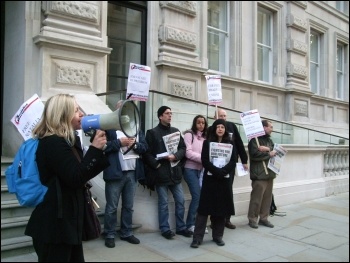 A protest against state brutality and imprisonment of trade unionists and their representatives in Kazakhstan was held outside the Corinthia Hotel in Whitehall Place, London, this morning.

The protest was timed to coincide with the opening of a two day conference of the Kazakhstan Business Forum.

Representatives of the wealthy Kazakh elite around president Nursultan Nazarbayev are seeking business deals at events like this to help nurture and add to the $100 billion that is invested by big businesses internationally in Kazakhstan to exploit the country’s natural resources, including oil, gas and uranium.

Meanwhile, the overwhelming majority of the population lives in poverty and working people in Kazakhstan are denied basic democratic rights, including the right to organise in independent trade unions.

The protest (including speeches and chants through a megaphone) caused a welcome stir of shock and consternation among Kazakh business and government representatives going into the plush hotel.

Some tried to photograph and film the protesters but weren’t so happy when photographs were taken in return by protesters of them! People passing by took an interest in the protest, taking leaflets on their way. 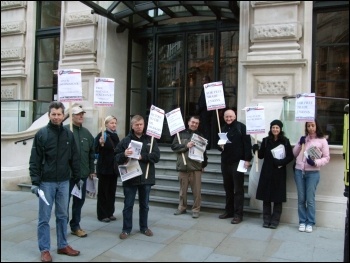 In western Kazakhstan, over 2,500 oil workers have been sacked for taking strike action to win a wage they can live on and reasonable working conditions.

During four months of strike action, the workers have endured great brutality from the state forces, including houses being burnt down, a trade union shop steward being killed and the daughter of a union leader being raped and killed.

The lawyer for the oil workers’ independent trade union, Natalya Sokolova, was sentenced to six years in prison in August for ‘incitement of social hatred’ and ‘illegally organising trade unions’.

Both are also leaders of the ‘Socialist Movement Kazakhstan’ and have been involved in a tremendous struggle against brutal housing evictions of residents who can’t afford their monthly payments.

These outstanding and courageous workers’ leaders have been imprisoned many times for the ‘crime’ of resisting poverty and repression.

Now, once again, criminal charges have been fabricated against them, as the corrupt, profiteering regime tries to destroy all opposition.

But workers in Kazakhstan are losing their fear of fighting back, and the independent unions have broad support. 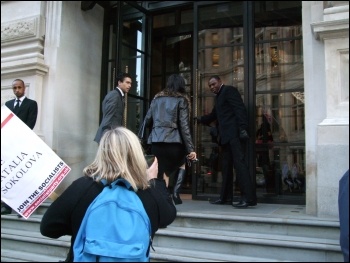 Gathered today at the Kazakhstan Business Forum are representatives of Kazmunaigaz, the oil company largely controlled by the dictatorial president and his clique, which is currently engaged in trying to crush the fightback of its workers’ trade union activists and legal representatives.

Also here are top officials of the BT Bank which is constantly trying to evict mortgagees from their homes after it has pushed them to borrow sums it has become impossible for them to repay.

Instead of foreign investments that are lining the pockets of Nazarbayev and his clique, these authoritarian and parasitic leaders should be boycotted internationally!

1: Head of the Supreme Court of Kazakhstan – Alina Bulatovna Rakhimbekova

2: Foreign Ministry of the Republic of Kazakhstan

3: The Head of the President’s Administration

Please send copies of all protests to [email protected]

For regular updates on the defence and solidarity campaign for socialist activists in Kazakhstan, see www.socialistworld.net

This version of this article was first posted on the Socialist Party website on 20 October 2011 and may vary slightly from the version subsequently printed in The Socialist.