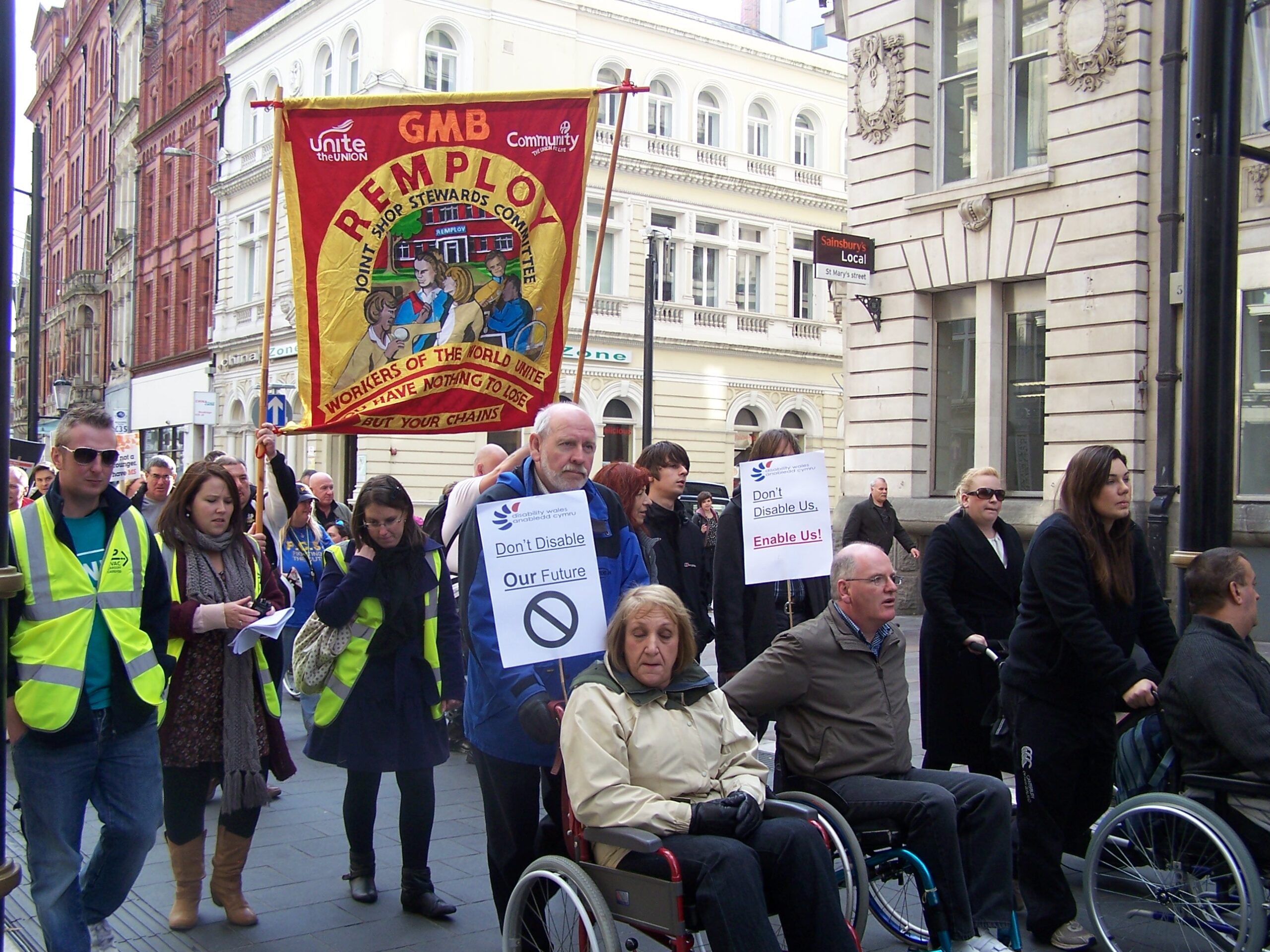 Hardest Hit marches and rallies took place in 12 cities across the UK on 22nd October, as part of a campaign against the Welfare Reform Bill, which will significantly reduce support for disabled people.

Many people are living in fear of cuts to essential benefits including Disability Living Allowance (DLA) and Employment and Support Allowance (ESA). 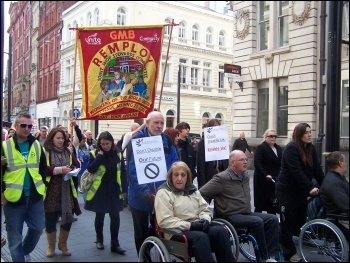 The turnout of 1,000 at the ‘Hardest Hit’ march and rally in Cardiff on 22nd October showed both the huge anger developing against the Tories’ proposals and potential to build a mass campaign against the attacks on the disabled.

Disabled campaigners, trade unionists and the wider anti-cuts movement got a great reception in the city centre as they marched through, chanting “no ifs, no buts, no disability cuts”.

But it also showed the weaknesses of the cross party, cross class approach taken by many charities and politicians who claim to be the official leadership of the disability rights movement. 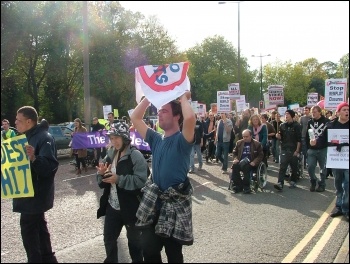 The march was inspiring in that a thousand disabled people, carers, trade unionists and anti-cuts campaigners turned out to march through Cardiff.

The overwhelming majority of those that turned out would have been looking for a lead in the fight to defeat attacks on disability benefits and a plan of action to defend vital public services including the NHS and local authority services.

They would have been sadly disappointed listening to the official platform of speakers which consisted of directors and executives of charities and three Welsh Assembly Members.

The Assembly Members included, unbelievably, Mohammad Ashgar, Tory AM for South Wales East. When large parts of the rally booed and heckled this representative of the party of the ruling class they were told to be quiet by the chair because the “support of all parties” is needed.

This representative of the Tory originators of these cuts was allowed to speak, while Les Woodward, the national trade union convenor for Remploy – employing around 2,800 disabled workers and threatened with closure by the same Tory party of which Mr Ashgar is a Welsh representative – was refused on the grounds that he was “too political”. 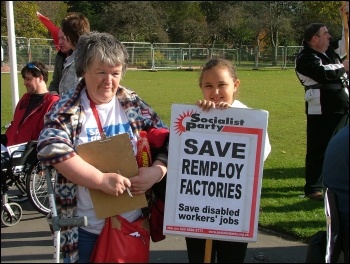 It was only actor and writer, Boyd Clack (Satellite City/High Hopes), who introduced some sense to the platform, telling marchers that the lesson taught to him as a boy by his dad – “you can never trust a Tory”- is as true today as it has ever been.

But he warned that his father would be turning in his grave to see what the Labour Party he had supported, has become.

He warned disabled fighters to rely only on their own strength and not the support of politicians. He could have added that we should not rely on the support of charities which rely on government funding and will do all they can to argue for their own slice of a shrinking pie, while doing everything in their power to prevent political discussion. 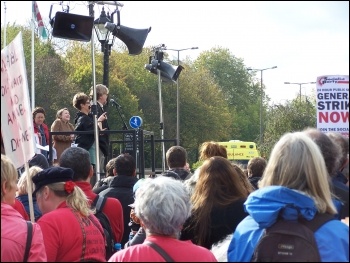 Fortunately, disabled campaigners do have allies they can rely on to fight all the way with them – public sector trade unionists, their families and the working class in general.

This was the theme of the ‘alternative’ rally that Socialist Party members staged – that the struggle against the Welfare Reform Bill and other attacks on the disabled can be defeated, as part of a campaign to oppose all public sector cuts.

Thanks to the Socialist Party, Les did get to address the crowd on the importance of fighting for Remploy and the thousands of disabled workers that it provides with the dignity of training, learning skills and earning a wage.

He also exposed the shameful way that charities, including some of those participating in the ‘hardest hit’ campaigns, have colluded with the Con-Dem government’s plans to destroy Remploy.

He was joined by other Socialist Party members, including Andrew Price from Cardiff Trades Council, whose message that the opposition to attacks on disability benefits and services needs to be linked to the strike action of public sector workers in November, was well received. 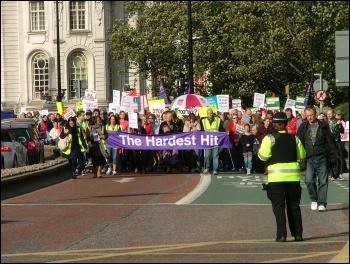 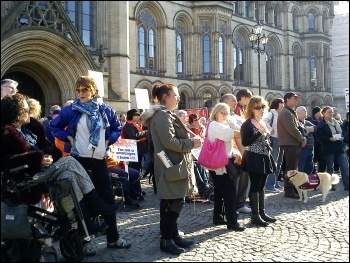 Leeds – no alternative from Labour

Around 400 people gathered in Leeds city centre to protest against the vicious government cuts which will harm the most vulnerable members of our society.

The Hardest Hit campaign, organised by the Disability Benefits Consortium and the UK Disabled Peoples Council, brought together disabled people from across Yorkshire and Humber to give a clear message to the Con-Dems: “No more cuts”.

The combined effects of cuts to benefits and public services will be particularly disastrous for disabled people, as many different types of support which enable them to get about, to look for and stay in work, to study and to live independent and dignified lives, are coming under fire.

As Robyn Brockie, Women’s Officer for the NUS Disabled Students’ Campaign, explained: “We are affected by every single cut”.

Not only are cuts being made to Disability Living Allowance and Incapacity Benefit, the scrapping of Education Maintenance Allowance disproportionately affects disabled students, 50% of whom relied on EMA. “We are not looking for handouts.

“We can’t find work or stay in work without the support. We want to be in society, but the cuts will isolate us”.

There are many additional costs to being disabled that people don’t see. Participation in higher education is difficult; many disabled students find that their choice of university is limited by having to live with, or close to, their family, with many having to return to their parents after graduating.

Robyn felt that higher education was essential to her and others being able to find meaningful and stable employment.

But the government seems determined to kick away the support which allows people with disabilities to participate in society.

It has also been quick to throw people off benefits, awarding a lucrative contract to ATOS to assess whether people are fit to work.

This highly flawed process sets targets for declaring people fit to work, even when it runs contrary to medical opinion.

As Val Buxton of Parkinson’s UK explained: “Parkinson’s sufferers might be assessed as not needing benefits because of a lack of understanding of the condition”.

This cabinet of millionaires is using deficit reduction as cover for an ideological attack on our society’s neediest.

Tim Mcsharry of the Access Committee Leeds spoke of the “devastating impact [which] could take disabled rights back several decades”.

In the media we have seen hysteria and stigmatisation of people on benefits, an unintended consequence of which has been a sharp increase in hate crime directed against disabled people, for which, says Mcsharry, the government must bear responsibility.

Local MP Hilary Benn said the government’s actions were unfair, that its economic policy isn’t working, and spoke of the need to boost demand in the economy. “We need to persuade the government they’ve got it wrong and that they need to change their minds.”

Though Labour’s lobbying against the Welfare Reform Bill is welcome, their message of slower, gentler cuts is not providing a real alternative, and their leader’s comments that working people should be given priority for social housing only serves to further stigmatise those who cannot work.

It was left to speakers like Sheila Banks, from Leeds Trades Council, to point out the need to oppose all cuts, and Socialist Party member Andy Smith got huge cheers when he demanded that the council stop making cuts to our services, including the termination earlier in the year of the Leeds Crisis Centre.

That we should refer to the extra support which people with disabilities rely upon as “benefits” is rather disingenuous.

As Paul Williams of Mencap put it: “I don’t see many benefits of being disabled”. Paul and his wife Janet both have a learning disability.

He was her main carer for five years, until she was taken into residential care. They are trying to find a place where they can live together again and he can look after her.

In his work for Mencap, he is fighting the misperception that disabled people are well off. Most of his £150 Disability Living Allowance goes on paying the gas bill.

He doesn’t drink, smoke, gamble, go abroad or buy new things. But his allowance is now under threat, and he has been told he should be working full time.

The government’s ruthless, dogmatic attacks on the welfare state have no consideration for the impact upon real people who already have to fight hard to be included in society. “We are not scroungers”, says Paul. “We don’t want everything.

“We just need enough. We want a society where disabled people are valued and respected”.

A smaller protest also took place in Bradford with around 60 people attending.

The Hardest Hit demo in Nottingham took place on the council house steps where 200 people gathered and listened to speakers who had been hit by some of the government’s cuts.

It gained a lot of support from passers-by who were angered by the attacks on the services disabled people and many others rely on.

A local choir sang and read poetry and members of occupy Nottingham who are occupying the square outside the council house took part in a silent protest.

The protest was really successful and we sold over 40 copies of the Socialist.

The Socialist Party leaflet distributed on the protests called for:

To find out about the disabled members’ group in the Socialist Party, contact: [email protected]

This version of this article was first posted on the Socialist Party website on 24 October 2011 and may vary slightly from the version subsequently printed in The Socialist.