From The Socialist newspaper, 23 November 2011

Enough is enough! Make N30 the start of a fight to stop all cuts 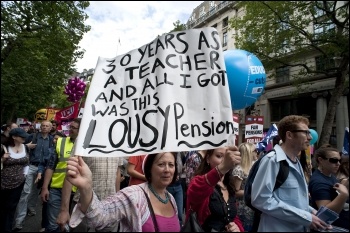 This government of millionaires claimed that its programme of savage cuts in public spending would eliminate Britain's structural deficit by 2014-15. Now, as the Socialist predicted, David Cameron has been forced to admit that this is impossible.

The government's assertion that the private sector would fill the gap created by slashing the public sector has been shown to be the nonsense it always was. Instead the deepening of the capitalist economic crisis, combined with the surge in unemployment and fall in taxes collected as a result of the public sector cuts, has even raised the prospect of an increase in the deficit.

The Con-Dems, however, are continuing to cut regardless. Only the super-rich are getting better off in Cameron's Britain. In the last year alone directors' pay in FTSE 100 companies grew by 49%. The latest figures from the High Pay Commission show that the gap between the richest and the rest of us is now the highest it has been since Queen Victoria was on the throne!

Meanwhile, government cuts are destroying the lives of millions - of the young, the old, the sick, the disabled - and will mean a lower quality of life for the vast majority of people.

Enough is enough! The time is overdue to stand up and fight back. That is what millions of public sector workers are doing by taking strike action on 30 November (N30) in defence of their pension rights. This is the biggest single day of strike action since 1926 and is terrifying the government.

The government has told public sector workers that they must pay more for their pensions, work longer and get much less on retirement. They say that 'gold-plated public sector pensions are no longer affordable. But as one PCS member tweeted, Tory cabinet minister Francis Maude is set to get a £731,000 pension pay-out and an annual £43,825 pension, while the average PCS member gets £4,200 a year.

N30 is in defence of pensions, but it is also a powerful weapon in the struggle against all cuts. Workers are facing pay cuts, job cuts, having to do interviews to keep jobs that they have worked in for decades, as well as cuts to all the services they rely on. Three million workers on strike will provide a taste to the Con-Dem bullies of who they are messing with. Working class people have huge potential power when they are organised and have a leadership that is ready to fight to win.

Further action should also be spread to the private sector. A discussion should be held on making the next 24-hour strike a general strike, including private as well as public sector workers. As a minimum a call must be put out for all industrial action - private and public - to be coordinated. For example, construction electricians are currently balloting over attacks on their national pay deal (with pay cuts of up to 35%) by construction companies who are lining up to receive government bailouts.

National action on the pensions can also be supplemented by strike action in areas facing specific cuts such as the over 21,000 HM Revenue and Customs staff who could strike over privatisation plans.

If a fighting strategy is to be implemented it is essential that decisions on the struggle are not left in the hands of the national trade union leaders. We demand that trade union members have democratic control of the negotiations at every stage.

Within the trade unions we need to begin to build fighting left organisations that struggle to ensure the trade unions fight in their members' interests. One demand of such organisations should be for regular elections of full-time officials and for them to be paid no more than a workers' wage. The National Shop Stewards Network (NSSN) also has an important role to play in bringing together militant trade unionists.

Coordinated strike action has the potential to bring down this rotten Con-Dem government. To succeed in doing this would give huge confidence to millions of workers. However, Labour coming to power would not lead to an end to the attacks workers are facing.

The overwhelming majority of Labour's funding comes from trade unions that are taking part in N30, but it does not represent trade unionists' interests. Ed Balls made it clear at this year's Labour Party conference that a Labour government would also cut public sector workers' pensions, demanding, just like the Con-Dems, that workers work longer, pay more and get less. At local level every single Labour-led council has implemented the Con-Dem cuts. Incredibly, not even one single Labour councillor has voted against a Labour council implementing cuts.

Ed Miliband showed which side he was on when he condemned the 30 June strike. To add insult to injury Ed Miliband was then photographed in parliament laughing over a cup of tea with Cameron and Clegg, while the pickets stood outside. Now he has refused to give support to N30 despite pressure even from the Daily Mirror not to criticise "carers, dinner ladies, council workers, NHS employees, teachers, Jobcentre staff and tax collectors [for] rebelling at being asked to pick up the tab for banksters' bonuses" by taking strike action.

N30 demonstrates the enormous potential industrial power of the organised working class. However, if we don't have a political voice as well, we are fighting with one hand tied behind our backs. We argue that the trade union movement should begin to build a new party - a party that stands in the interests of the majority.

For the last 18 months the Socialist Party has participated in the Trade Unionist and Socialist Coalition (TUSC) an electoral alliance involving leading militant trade unionists from the RMT, PCS and NUT. TUSC plays an important role, enabling trade unionists, community campaigners and socialists to stand candidates against the pro-austerity consensus of the capitalist parties. However, the potential exists for this to develop on a far wider scale in the coming period. During the strike on 30 June, every call made for trade unionists to stand for election themselves as trade union 'anti-cuts candidates' was cheered to the rafters.

Even if trade union candidates were to initially stand on a limited programme - opposition to all cuts in jobs, pensions, services and benefits, and repeal of the anti-trade union laws - it would mark a major step forward. However, the struggle that public sector workers are currently fighting goes beyond those immediate issues, in reality it is a struggle against the consequences of capitalism today and therefore poses the need for a socialist alternative.

The economic crisis was not caused by working class people; it is a crisis of the capitalist system. The same bankers and financiers who triggered the crisis by gambling vast sums are now demanding that governments bail them out. Not just in Britain, but across Europe, governments are willingly doing the financiers' bidding.

A socialist society would be run in the interests of the millions, not the billionaires. For a start it would nationalise the banking and finance sector - not to prop them up and leave the bankers in charge like New Labour did - but to run them democratically to help meet the needs of the majority. However, that would only be the start.

Capitalism has led to enormous economic destruction. In Britain around 10% of wealth has already been lost as a result of the recession, due to factories and workplaces closing, resulting in 2.62 million and rising officially unemployed. That is why a crucial step towards solving the crisis would be to take the big corporations that dominate Britain's economy into democratic public ownership in order to allow for production to be planned for need and not for profit.

Enough is enough! Make N30 the start of a fight to stop all cuts

Reasons to be on strike

Capitalism is crisis - there is an alternative - fight for socialism!

Why I became a socialist

No answers from politicians on Newsnight

Save Coventry Sure Start

Tories and Labour fail to give 'Any Answers'

Why Europe's capitalist leaders cannot save the floundering eurozone project

Greece and Italy get unelected technocrats - Southampton gets chief executives!