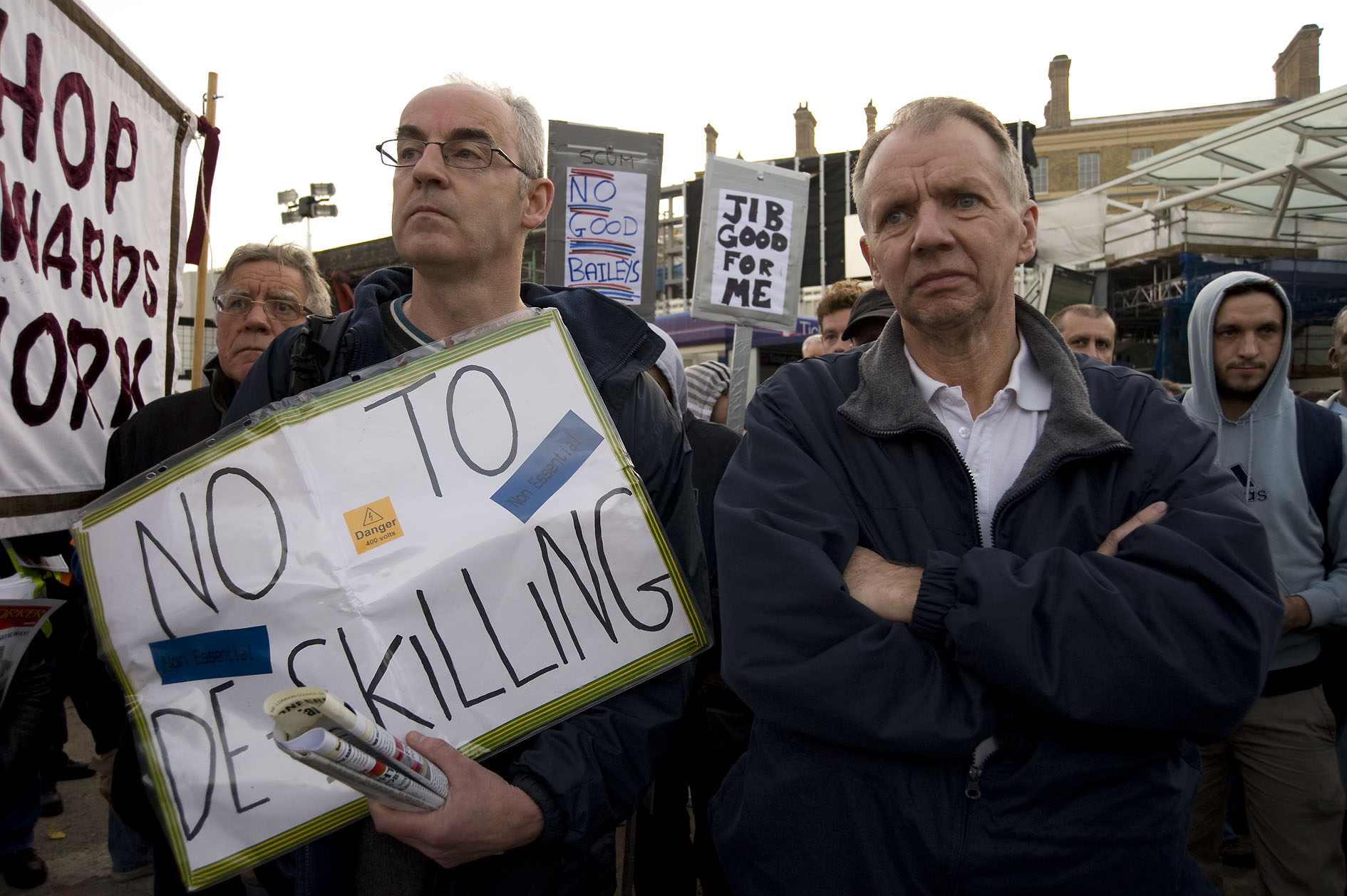 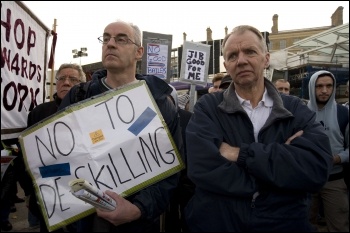 The sixth London protest of construction electricians at Kings Cross Project against de-skilliing in the industry and threats by the employers to withdraw from the Joint Industry (JIB) Board agreement, photo Paul Mattsson   (Click to enlarge: opens in new window)

Electricians are currently fighting a 35% pay cut and the deskilling of their trade, being imposed by seven companies using the new “Besna” contracts.

There have been huge walkouts to defend current terms and conditions under the “Joint Industry Board” (JIB).

However, the JIB itself has been opposed for years by rank and file trade unionists in the electrical industry.

Rather than a collective-bargaining structure where unions can negotiate with employers, instead it has always been a “social partnership” agreement between the electrical union tops and the employers, to the detriment of ordinary electricians.

After the right wing seized control of the electricians’ union (EETPU), it wanted to consolidate that control, and so under a legally-binding agreement in 1968 a unique partnership was forged between employer and union and introduced to British industry.

It was the Joint Industry Board (JIB) and consisted of the Electrical Contractors Association (ECA employers) and the Electrical Electronic Telecommunications and Plumbing Union.

The two parties were the only two permanent members, under Rule 6 of the JIB’s constitution. Its national board consisted of members appointed by the ECA and EETPU and this was the principal executive committee (Rule 23).

This JIB was imported into the British Electrical Contracting Industry after a delegation visited New York to meet with the JIB there which had been in existence for more than 20 years.

This New York model was effectively a sweetheart deal between the JIB partners, the ECA and the International Brotherhood of Electrical Workers Local 3.

In return for the union disciplining its members, improving productivity and eliminating strikes, the employers delivered an agreed package of pay, welfare benefits and training.

Eric Hammond, then an executive member of the EETPU, who had been part of that delegation to America described it, as his “first revolution” in how trade unions operate.

The JIB replaced the old National Joint Industrial Council, in which the NJIC hammered out agreements between two opposing sides in the industry.

Instead of normal collective bargaining of trade union and employer on different sides, they would now work in partnership.

Right from the outset, the two parties to the JIB formed a trade union, namely the JIBTU, even though the legality of such registration was always in doubt.

Even the chief registrar noted in his 1967 annual report that it was an unusual type of union as it included representatives of both employers and employees.

“When Frank Graham and I challenged it about its registration, it claimed initially to have received special dispensation to register in 1968 from the then Minister for Labour, Mr.

“Ray Gunter. The JIB made that claim in letters to the certification officer and to the Chairman of the Employment Sub-Committee, but the claim is bogus.

“The then Under-Secretary of State at the Department of Trade and Industry, told me in a letter in 1996 that he could find no reference to such dispensation in the Department’s records.

He added that he could find no statutory basis – past or present – under which anyone in any Government could have given such a dispensation.” (Hansard, 26 Oct 1999).

Yet the dispensation claimed by the JIB allowed for a provident fund to be established to provide benefits to members.

The JIB gained considerable material benefits from being registered as a trade union, such as tax exemptions.

In reality the JIB had received tax allowances to which it was not legally entitled. Following the 1991 challenge, the JIB asked to be deregistered as it followed the JIB was not and never had been a trade union.

Yet the relationship between the two parties grew ever stronger and the detriment to members ever greater and in 1979 another unique dispensation was granted by the Tory Secretary for State Patrick Mayhew.

This gave exemption to the JIB by allowing it to substitute its own dismissal procedure for unfair dismissals, it is the only such exemption order granted in any industry.

It effectively denied access to independent arbitration for the electrical personnel. John McAllion explained to parliament that:

“… although on paper the JIB dismissals procedure allows for access to independent arbitration, in reality that access is blocked.

“The JIB’s procedure, as set out in its handbook, makes it clear that any appellant must give good reason to the JIB national board to justify reference to independent arbitration.

“Clearly, if the JIB national board does not accept those reasons, there will be no reference to independent arbitration for that appellant.”

This exemption order would be revoked by parliament after the mass sacking of 240 electricians at the huge Pfizer project in Kent in April 2000 because it fell foul of the Human Rights Act. However, the legal status of the JIB itself was questioned by John McAllion:

“We simply do not know the current legal status of the JIB. If it is an unincorporated association [as it claimed to be – EC], it has no legal personality of its own.

“We do not know who is legally responsible for registering it, to whom it makes returns, or who holds it to account.

“For a large and wealthy organisation that exercises tight control over one of our most important industrial sectors, that is entirely unacceptable.”

The partnership would continue and even formed its own employment agency for electrical contracting, “ESCA Services”, which was owned by employer and union.

The fact that here clearly existed what would have been obvious conflict of interest for the union, was ignored.

The employers, by paying “union dues” on behalf of “union members”, were able to give the union more than £1million every year through so-called “check-off”.

The employers paid the piper and clearly evidently they called the tune. The EETPU was expelled by the TUC and only gained re-entry by merging with the AEU and using the new name of AEEU.

Through its expulsion a new union was formed in the electrical industry, namely the Electrical Plumbing Industrial Union (EPIU).

It was this new union which brought about the revocation of the exemption order at Pfizer’s, but would see its entire membership placed on the blacklist revealed by the Information Commissioner’s Office.

Even suspicion alone of membership of the EPIU was enough to secure an individual’s name on the blacklist.

Many of the larger electrical companies who were ECA members were subscribers to the blacklist.

In conclusion the JIB promised an industry of benefits, training, welfare, industrial harmony but in reality became an industry of have-a-bash electrics, of mass sackings, an industry of workers in which 95% of workforces would be employed via agencies, where companies install their own union reps, an industry that sought complete control over its workforce with its partners it always refers to as “our” union.

As many have witnessed, the officials who have served employers so well are able to secure positions with the employers and obviously do so without ever having swapped sides.

Many electricians pay for the right to be paid and are often employed by three companies: the JIB, the agencies, and the “satellite offices” which many electricians have to pay in order to receive a pay slip. An industry where even on major projects JIB rates are not paid.

An industry that the whole country has recently witnessed the rank and file magnificently organise itself throughout the UK as it responds to the threatened tear-up of our national agreement by seven companies who wish to implement what they call the Besna agreement.

No coincidence that after years of detriment, the Rank and File ignores its union officials in the electrical sector of Unite, where the national officer wanted to wait till December before responding to the threatened sackings of thousands of its members.

No coincidence that six of the seven Besna companies were subscribers to the construction blacklist. After 43 years of witnessing the partnership of union and employer in the JIB electrical contracting industry the Rank and File are saying they’ve suffered enough and will suffer no more.

The democracy for so long denied the workers will soon be wrested from the grip of the employers. The Rank and File have nothing to lose and everything to gain.