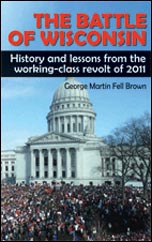 The Battle of Wisconsin by George Martin Fell Brown

Time magazine’s “Person of the year” for 2011 was simply “The Protester”. From the Maghreb in North Africa to the colder climes of Madison, USA, public places echoed to the sounds of demonstrations, occupations and revolutions. 2011 was a warning to the ruling classes worldwide of things to come.

The Battle of Wisconsin by George Martin Fell Brown is the story of one of those momentous struggles. Recently issued as a pamphlet by Socialist Alternative (the US supporters of the CWI), it is required reading for socialists in Britain, as the lessons needing to be learnt in the US are no less relevant here.

The sleeping giant of the American working class began to wake up. While this battle did not succeed, it helped to pave the way for a potential revival of the US labour movement’s militant traditions in general and the occupy movement later on last year in particular.

Wisconsin’s Republican governor Scott Walker’s attempts to introduce a Budget Repair Bill were met with huge opposition. Little surprise as the bill abolished collective bargaining rights for public sector workers over anything other than pay.

But pay increases would be automatically capped to inflation so public sector unions would be left with bargaining rights only over pay cuts!

The bill was announced on Thursday 10 February. On Monday 14th, there was a small demonstration, a day later student walkouts occurred along with a rally of 10,000.

On Wednesday, thousands of students walked out state-wide and in Madison itself the whole school district was shut down for the day as 30,000 encircled the Wisconsin State Capitol building.

On Thursday, there was a state-wide ‘sick-out’ by 92,000 teachers and 50,000 were on the street demonstrations. By Saturday, an estimated 100,000 were outside the Capitol and 8,000 participating in a sit-in inside. As the author points out, “consciousness… transformed almost overnight”.

But why did this movement after weeks of occupation of the Capitol in Wisconsin and tremendous mobilisations not win?

George deals with all of the many factors in the pamphlet. These include the lack of strength of the left; the dearth of recent experience in struggle in the unions; and the role of the union leaders who sunk all their faith in the “recall” campaign. Instead of using the potential of the movement to stop Walker with demonstrations, strikes and – as a next step – a one-day general strike, the movement was derailed to a process of recalling parliamentarians and Walker himself.

While parts of the movement were just inexperienced, a part of the union leadership did everything to channel anger into the big business Democratic Party. This meant subordinating their members’ livelihoods to the politics of this party’s candidates and a “recall” process which is now – one year later – still not over, while the laws are put in place.

This orientation of trade union leaders to a party of “lesser evil-ism” will sound so familiar to readers in Britain. The pressing need for a new mass party of the working class is no less urgent in the US than it is in Britain. What struck me reading the pamphlet is that I could have substituted the words Labour Party (in Britain) for Democratic Party over and over again.

The former Democratic mayor of Salt Lake City, Rocky Anderson, is quoted as calling his former party “a gutless, unprincipled party, bought and paid for by the same interests that buy and pay for the Republican Party”.

The demand for a general strike, even of a one-day state-wide public sector nature to begin with, was aired by Socialist Alternative consistently as the only way to try and secure a defeat of the bill. This was probably the most discussed tactic among workers and one that received widespread support. But the idea of calling a general strike never got past the union bureaucrats.

The pamphlet contains an excellent analysis on the role of the police. Many in Wisconsin declared their support for the struggle. The police union sent messages of support. Some even joined the occupation themselves!

When the pressures of the movement are strong enough to prevent the ruling class from using the police against workers, a certain stalemate can be reached.

But the ruling class will always seek to use the police for their original aim – that of protecting the property interests of the rich. These contradictions led to some confusion in the ranks of many demonstrators.

“The Battle of Wisconsin” deserves to be read by labour movement activists (and their leaders!) worldwide. It relates “an inspiring, vibrant social movement” without “sugarcoating” the outcome.

As the author says, the working class in Wisconsin “in a few months… have learned more than can often be learned in years”.