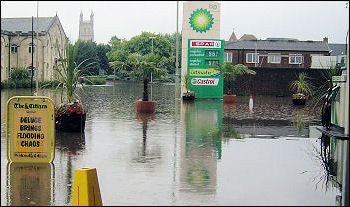 We are in drought. This is Thames Water's message for South East England, appearing on giant billboard images of cracked, dry earth.

But Britain is a first world country. It is a rainy country! And since 1990 Thames Water has paid out £5 billion to shareholders. So why can't they splash out on us?

The drought is a surprise to many in London who endured a soggy April. It must seem more incredible to flash flood victims in the South. And still more to residents of rain-rich Wales.

Water workers' union GMB, however, saw it all coming. In a recent statement the union noted that reservoirs totalling 600 million gallons have been closed across the region. Most of the sites were sold off for lucrative property developments. And every year almost a quarter of the entire water supply leaks from the system. Despite this, more than half of all water companies are not required to reduce their leakages at all before 2015.

No shortage of water

Meanwhile, the cost of piping water in from rainy regions means utility bosses are dragging their heels. Two months ago Thames Water announced plans involving old canals to avoid "having to build expensive pipes" and "additional pumping". This is too little, too late.

GMB has called for more connection between Wales and the South East since at least 2006. Astonishingly, plans for this date back 140 years. "What is not in short supply is water" said the union in March, "but there is a shortage of structures" - reservoirs, waterways and resource planning - "to get the water where it is needed."

The cause of this absurd situation? Privatisation. Thames Water and its counterparts have made billions in profit since buying up the assets of regional water authorities in 1989. But rather than extending infrastructure or lowering prices, this surplus has been used to fill the trough for greedy executives and bloated shareholders.

The rest is being poured into the pockets of private contractors as they foist the massively disruptive Thames 'super sewer' on South Londoners. Colin Green, a professor of water economics, estimates the project will make Thames Water £100 million a year.

The three main parties all say the answer lies in introducing a 'market' for water. But the profit motive is the problem! The avarice of utility bosses is such that John Elfed Jones, former head of Welsh Water, said in April that Wales should be flogging its rainfall "like oil"!

Socialists say that utilities should be brought into public ownership. And not on the partial terms of the shambolic bank bailouts. Water should be wholly owned by the state.

The industry should be controlled and managed democratically by workers. And regions should cooperate to meet the needs of all, not compete to enrich a few.