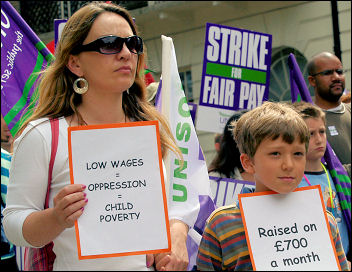 Cuts are now predicted to last to 2020. But Prime Minister David Cameron’s speech on Monday 25 June mapped out the depth of that on-going suffering. The speech included little detail but spells out misery for millions, if implemented.

Without listing all aspects of the attack, some of the most vicious of 17 cruel proposals are: removing housing benefit from 16-24 year olds; restricting income support and child benefit to single mothers if they have three or more children and requiring lone parents of children as young as three attend Jobcentres (the current limit is five thanks to Labour cuts); making jobseekers work for their dole; banning school leavers from going straight on to benefit.

With growing opposition to austerity why has he made this promise of pain, pain and more pain? Cameron is attempting to play the divide and rule game – picturing some who receive benefits as the ‘undeserving work-shy poor’, responsible for sucking billions out of the economy.

On a similar theme the local councils’ organisation has claimed that the cost of elderly care is responsible for likely further cuts in libraries and other services of up to 90%. In reality it is bank bailouts, and, fundamentally, the capitalist system that is behind the crisis.

Polly Toynbee in the Guardian explains how Cameron attempts to sew seeds of blame in his speech: “How knowingly he misled in almost every example he gave, as he pitted ‘those who work hard and do the right thing’ against those on benefits, deliberately disguising that these are mainly the same people.

“Most of the poor drawing benefits are cleaners, carers, caterers – the 62% living below the poverty line, working hard yet needing benefits to survive.”

While whipping up frustration with money spent on the housing benefit bill, a common theme for the Tories, and Lib Dems and Labour, he does not explain that £950 million of the £1 billion increase in housing benefit has been paid to low-paid workers as rents skyrocket and wages are frozen or cut.

It also appears that a Tory version of a beauty pageant is taking place in the party with candidates, such as Michael Gove, for future leadership roles flaunting their right-wing credentials for the backbenchers to admire and assess.

Some have argued that this is the Tories’ ‘break for freedom’ – an attempt to show their true colours, free from the shackles of Lib Dem softness. But it would be a huge mistake to imagine for a second that workers can rely on the Liberal Democrats to stop these savage attacks becoming fact.

New Labour cannot be trusted to fight these proposals either. So far they have promised to maintain the cuts in pensions and public services, been unable to commit to even restoring the 50p tax rate on the super-rich and failed to support trade union action against the cuts.

The need for a new mass workers’ party has never been so urgent. See page 8 for news on the Trade Unionist and Socialist Coalition – an important step in this direction.

…Unions must respond in kind

Cameron’s speech should be a like a red rag to a bull for the trade union movement. The Tories’ gloves are off and the working class and all suffering cuts must respond in kind.

The Trades Union Congress (TUC) has called a national demonstration for Saturday 20 October. Every effort must be made to make it a huge display of organised rage against these cruel and unnecessary cuts.

The central slogan for that demo should be a clear rallying call to cut across any attempts to divide us: ‘fight all the cuts’. But to reach out to the millions suffering austerity there must also be a programme – rent caps not benefit caps, investment in house-building, jobs and services, an end to low pay, no more privatisation gifts to big business or bank bailouts – nationalise the banks. And solidarity with those fighting austerity internationally.

A demonstration is a rallying call – but to really express our opposition we need the 20th to be the preparation for a 24-hour general strike – with the promise of further action should the cuts continue. The National Shop Stewards Network will be lobbying the TUC in September to demand this.

Cameron and Co have no solutions to a world in crisis other than to gouge the cost out of the 99%. Their policies promise joblessness, homelessness and spiralling poverty. Their propaganda is designed to sew division. Our movement has the potential power to answer them and to stop them – let’s organise to do that.

We demand a 24-hour general strike

NSSN-organised lobby of the TUC