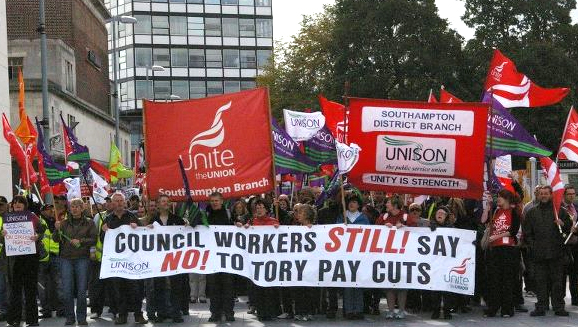 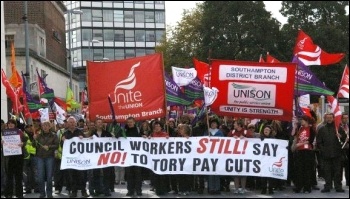 In the 3 May elections, the Tory council in Southampton suffered a heavy defeat. This followed months of strikes and mass demonstrations by council workers with the backing of the local community.

Now, significantly, two councillors in the new Labour administration have voted against their own party’s cuts.

Tensions had risen again this week as Labour met to vote on their post-election mini-budget. Council trade unions, expecting the restoration of their pay, savagely cut by the previous Tory council, have been left hanging.

Still in negotiations, a recent offer failed to meet union support as it included 90 redundancies. Worse still, Labour increased its previous proposed cuts from their February budget by a further £800,000, to almost £13 million for this year.

To the outrage of the local community, council workers and local councillors, this mini-budget brought forward without any prior discussion, the closure of Oaklands Pool with a threat to a further 30 jobs.

Unison general secretary Dave Prentis, at Unison conference, hailed the victory of Labour in Southampton, as a great step forward for members.

In just a few weeks every promise, to consult, to restore pay, to avoid redundancies, is in tatters.

Council workers and unions are furious at these proposals and the failure to consult. Council workers had been encouraged to believe that the Labour Party would be different to the Tories.

But as we have consistently warned, leaders of the Labour group had no intention to break from the austerity agenda. 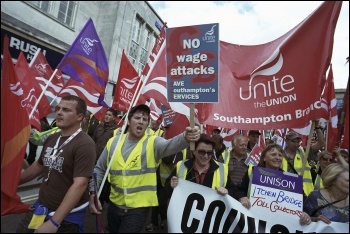 Over 1,000 council workers, striking Medirest cleaners and others marched through Southampton on 13 June in a powerful show of solidarity against vicious council cuts and the scandalous consequence of the private sector in the NHS , photo Paul Mattsson   (Click to enlarge: opens in new window)

Even union officers who had previously encouraged the idea of backing Labour have described it as unacceptable.

Having spoken out prior to the council meeting, the councillors received the public support of the Unison, Unite and GMB council unions.

Decisively when it came to the vote on the Labour budget, both councillors voted against the cuts.

It is now an urgent task to build support around this stand, firstly to stop the closure of Oaklands Pool but also to challenge the planned cuts as a whole.

Socialist Party members got strong support from the local community at a campaign stall on Saturday to save the pool and oppose cuts.

Undoubtedly Keith and Don will come under attack from the Labour group. With the backing of the unions, socialists and the anti-cuts movement this must be resisted.

It is those who voted for cuts who should be suspended and expelled from the Labour Party. If the council unions continue to encourage members to join the Labour Party it must be on the basis of opposing the cuts and removing those councillors who will not back such a stand.

Once again it poses the question of political representation for the anti-cuts movement. Southampton Socialist Party has given its full public support to the stand of the councillors.

However the Labour budget shows that union support for the Labour Party is untenable and reaffirms the urgent task of giving the anti-cuts movement a political voice that will give unconditional backing to the trade union struggle against cuts.

This version of this article was first posted on the Socialist Party website on 13 July 2012 and may vary slightly from the version subsequently printed in The Socialist.