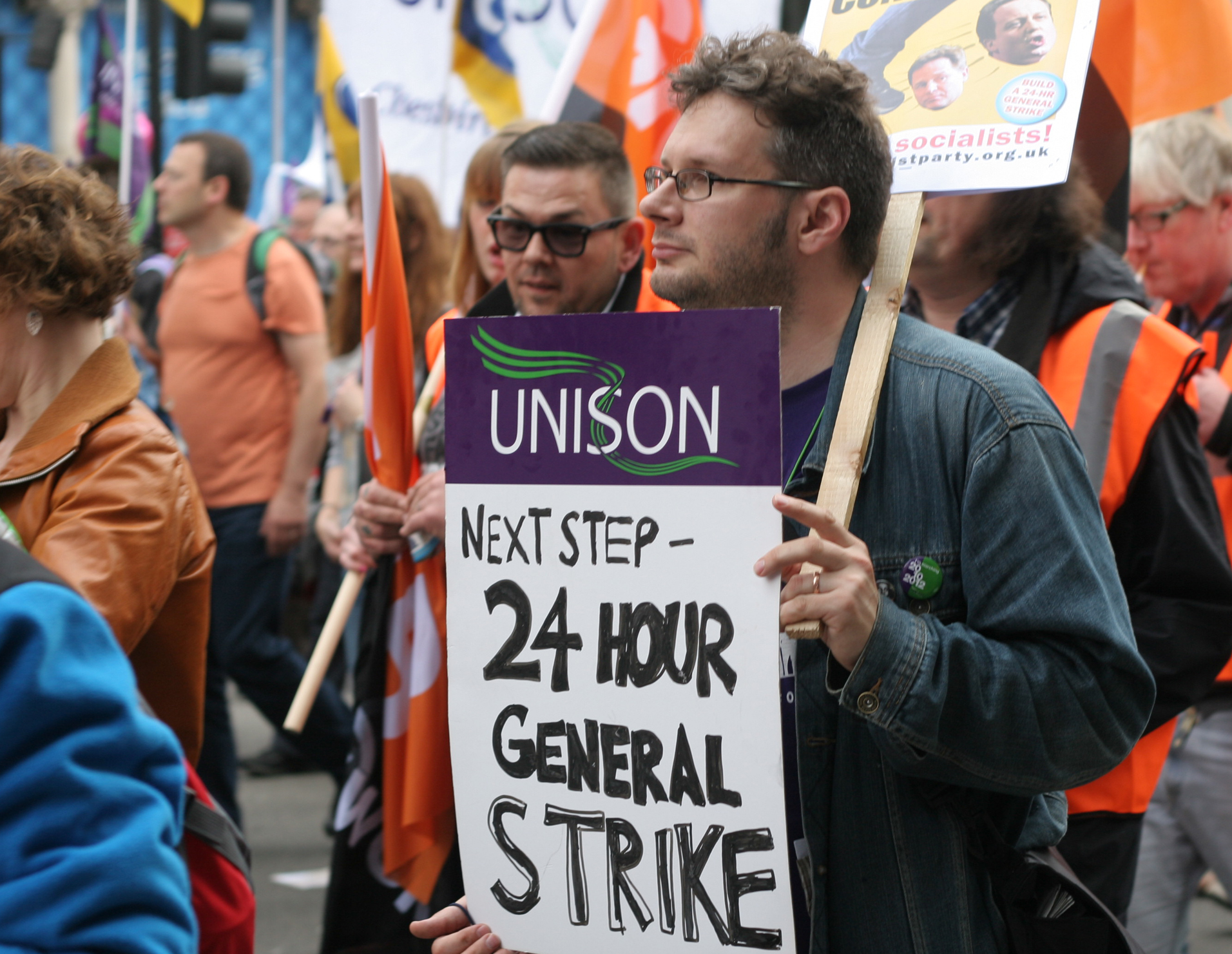 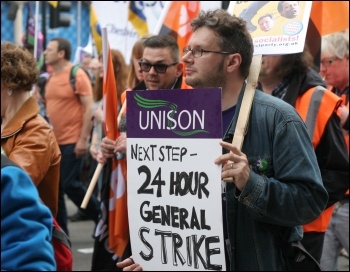 At the 20 October anti-austerity demonstration, three trade union general secretaries – Len McCluskey of Unite, Bob Crow of the RMT and Mark Serwotka of the PCS – reflected the feelings of the majority of trade unionists in calling for a 24-hour general strike.

Urgent plans must be drawn up now to give flesh to this call with an early date set for a strike to take place. However, it would be a mistake to imagine that the whole trade union movement is convinced and united in agreeing, let alone carrying out, the strike call, which was also endorsed by the last TUC Congress in September.

It was noticeable that other general secretaries did not, in their speeches, either support or join in the general acclamation in Hyde Park for the general strike call. This indicates that right-wing trade union leaders will attempt to hamper and frustrate a strike taking place. They will seek to hide behind the ‘difficulties’ – particularly the hurdle of Thatcher’s anti-union laws – in organising such a strike.

Their role – particularly those like Dave Prentis of Unison – was laid bare during the 2011 pensions’ battle. They broke the common front with other trade unions and, as a result, many workers will now be compelled to work longer for less pay. Mass pressure needs to be exerted now to ensure that this does not happen again. This is particularly necessary in unions like Unison, the GMB and in some others where the leadership will drag their feet.

Right-wing trade union leaders who habitually betray their members should take a warning from the recent splendid and heroic actions of the South African miners.

Kept in the dirt by ruthless South African capitalism, their suffering was compounded by their ‘leaders’ in the NUM and Cosatu, who have shamefully collaborated with the bosses. Consequently, the miners have elbowed their former leaders aside. A similar fate awaits those trade union leaders in Britain who let trade unionists down at this momentous time.

A mass campaign of explanation should drive home why a one-day strike is necessary to stop the government in its tracks. The trade unions have marched together; now it is necessary to strike together in one massive demonstration of the power of working people.

Imagine the scene; with factories, workplaces and transport – apart from the essential means of getting to demonstrations, etc – all falling silent on one day. It would bring home that society cannot function without the working class. The same could not be said for the parasitic capitalists who, through their government – the Tory-Liberal Democrat coalition – are dragging the British people into a social abyss.

The British working class has not had such an experience for 86 years, since the time of the 1926 general strike. Greece has had 20 general strikes in the last two years alone. Spain, Portugal and Italy have trod a similar path, France and Belgium likewise.

Britain did come close to a one-day strike at the time of the jailing of the dockers in 1972. Even the right-wing then general secretary of the TUC, Vic Feather, was compelled to threaten the Tory government of Ted Heath with a general strike unless the dockers were released.

He did this knowing he would not have to carry out his threat because the government had already indicated that the dockers would be released through the medium of their own ‘fairy godmother’, the Official Solicitor, who few people had ever heard of before!

This demonstrates the lengths to which the British ruling class will go to in order to avoid setting a new benchmark – a one-day general strike – for workers resisting them. It also illustrates that they can be compelled to make concessions when they are threatened with the power of the trade unions and the working class. 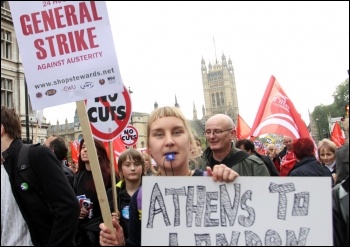 It is no accident that the issue of the general strike is back on the agenda of the workers’ movement. There are similar features in Britain today as in the early 1920s, which culminated in the 1926 general strike. The scale and the depth of the economic crisis of British and world capitalism are devastating. Like then, the capitalists want to impose the cost of this crisis onto the backs of the working class. They prepared a savage programme of cuts, outlined in the Geddes report of 1922.

A similar scale of cuts has been proposed by Cameron and Osborne today, with the working class and poorest sections of the population, such as the disabled and low paid facing benefit cuts, etc, most affected.

Unemployment – the most visible expression of the sclerotic state of ‘modern’ capitalism – stands at 200 million worldwide, according to the United Nations’ International Labour Organisation. That is fully 30 million higher than before the crisis started in 2007-08. 40 million more people have also dropped out of the labour market since then. Yet by 2013 the figure of worldwide unemployment will have risen by at least seven million to 207 million.

Cameron and British capitalism offer nothing different. A month ago, Cameron said the crisis would last at least until the end of this decade. Larry Elliott of the Guardian speculates that Britain may experience not one but possibly two or even three ‘lost decades’.

This will be characterised by economic paralysis, resulting in stagnant and falling living standards. Yet Cameron tries to hide his nakedness by triumphantly waving the latest ‘growth’ figures, prepared for him by the ‘Department of Wild Guesses’, and the ‘Ministry of Thin Air’!

These are just one quarter’s figures. They largely arise from the Olympics, which had an effect almost solely in London. Even here they merely boosted part-time jobs and the self-employed, usually on miserable incomes, while the rest of the country outside of London still looks like an economic wasteland.

In fact, the crisis is so deep and profound, the sacrifices demanded of the working class so severe, that some workers say, why just strike for one day? If we come out for one-day, why not then take it further into an all-out general strike? It is a question here of soberly estimating the stage through which the working class and the labour movement are passing.

Therefore, before engaging in such a decisive battle it is necessary to go through a preparatory stage, maybe a number of limited strikes of one day or even longer, as in Greece. It is vital to understand the rhythm of the workers’ movement at each stage.

Today, a one-day strike is the most appropriate and effective action the working class can take. Even the six million workers organised in trade unions – encompassing 26% of the labour force – coming out in a one-day strike would shake this rotten government to its foundations. The trade unions should lose no time in organising the most massive display of working class power seen in generations – a colossal and effective 24-hour general strike!