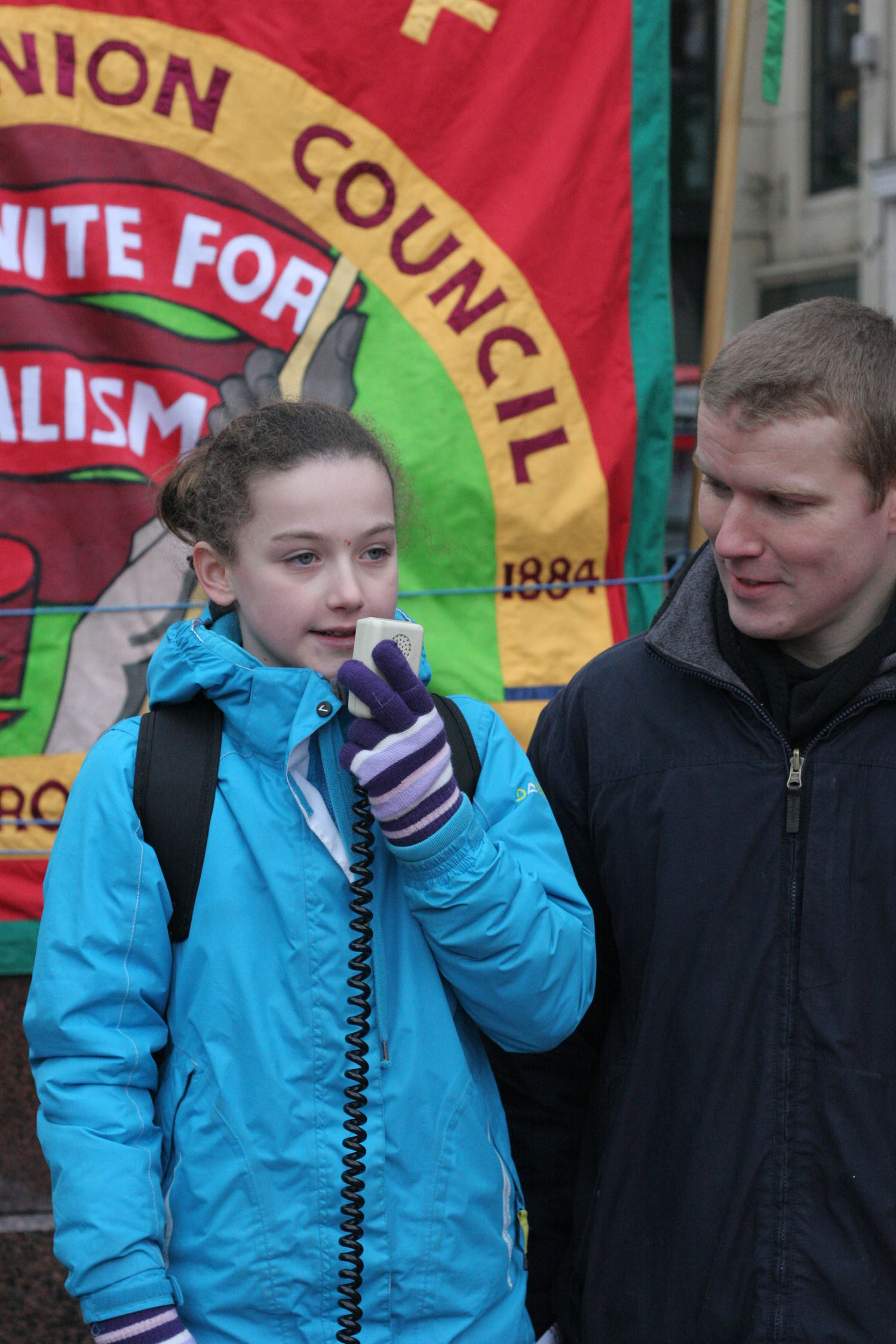 Nearly a hundred people braved the cold and rain on Saturday 12 January in Cardiff to protest against attempts to scapegoat benefit claimants for the economic crisis.

Cardiff Against The Cuts put out a call for trade unionists, disabled activists, the unemployed and other campaigners to unite in the face of a determined attempt by the government to divide the growing opposition to its assault on the welfare state, by pitting those in work against those who are out of work.

Cameron’s lie that “we are all in it together” has never been so obvious. In the same week that benefit claimants were told that they deserve a real cut in their incomes, MPs claimed that they deserve an extra £20,000 per year – a 32% increase! Osborne’s call for us to literally turn on our neighbours when we’re angry at the cuts is an insult to our intelligence. 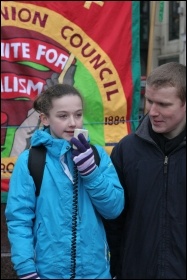 Speaking at the rally, photo by Becky Davis   (Click to enlarge: opens in new window)

Even a child could see through the deception. That was made clear by Hannah Mainstone (aged 9), who spoke at the rally and explained how her family will lose money as a result of benefit cuts. “My stepdad Nathan is ill with sarcoidosis” she said, “The cuts have got to stop.

“They are taking money off the poor and giving it to the rich. It is not fair and it has got to change”.

One slightly older activist, Mark, explained that his parents were long-term unemployed when he was a child in the eighties. “Me and my sisters have all got good jobs now and my dad got back on his feet and works at the Tax Office.

“It wouldn’t have been possible for us to keep things together if it wasn’t for the safety net”.

Backup from the trade union movement was out in force. Ramon Corria, the secretary of Cardiff Trades Council, opened the rally with a blistering attack on the government’s ideological assault.

Katrine Williams, chair of PCS Wales explained we need a united campaign because “ordinary people really are in it together, but the super-rich are in it for themselves”.

Phil Jones from the RMT brought greetings: “My union supports you and will stand shoulder to shoulder with you as long as the fight continues”. Other speakers explained the impact of the cuts on women, youth and pensioners.

With the scale of the assault, no wonder there are comparisons being made with the Poll Tax, which united all working class people under its hammer blows.

But what’s missing today is organisation. Just over twenty years ago Thatcher was defeated by the Anti-Poll Tax Federation, which organised a non-payment campaign of 18 million people.

Cardiff Against The Cuts hopes to take a step towards remedying that problem at its AGM, at 7.30pm on Tuesday 29th January in Transport House.