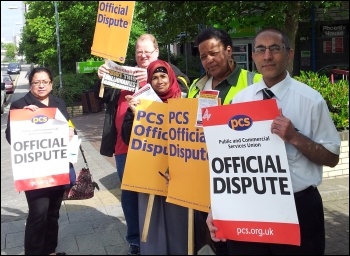 On 3 June, a week of rolling strike action in the two largest government departments, the Department for Work and Pensions (DWP) and the tax department HMRC, began.

This involves 135,000 workers in a dispute over pay cuts, jobs and working conditions. This action was preceded by strikes in other departments, including the vehicle licensing agency DVLA.

For once it was nice weather for the civil service union PCS pickets at the DVLA in Swansea, when I went to give solidarity greetings on behalf of the Swansea trades council and the Socialist Party on 31 May.

PCS members in the Department of Transport and the Land Registry were on strike as part of a programme of departmental action that will see DWP and HMRC members joining later.

Pickets told me that they were striking over a raft of issues. These include:

Despite all these, and more, attacks, the pickets were resolute and aware that this is a fight that has to be won.

I've always experienced a good reception on PCS picket lines. The only unfriendly greeting I had was from a visiting Labour MP who made sneering comments about selling 'magazines' (the Socialist). When I offered her one she told me she'd "been there, done that and got the T-shirt".

It was good to see a Labour politician who knows what a picket line is; it's just a shame that the majority of Labour MPs didn't back John McDonnell MP's attempt to defend PCS members' right to strike in the Home Office and Border Agency.

Each of the three pickets the MP had been talking to when I arrived bought a Socialist paper off me.

"Members are totally opposed to the draconian changes to terms and conditions, and despite the pay freeze most people are prepared to lose a day's pay in support of the PCS-organised action".