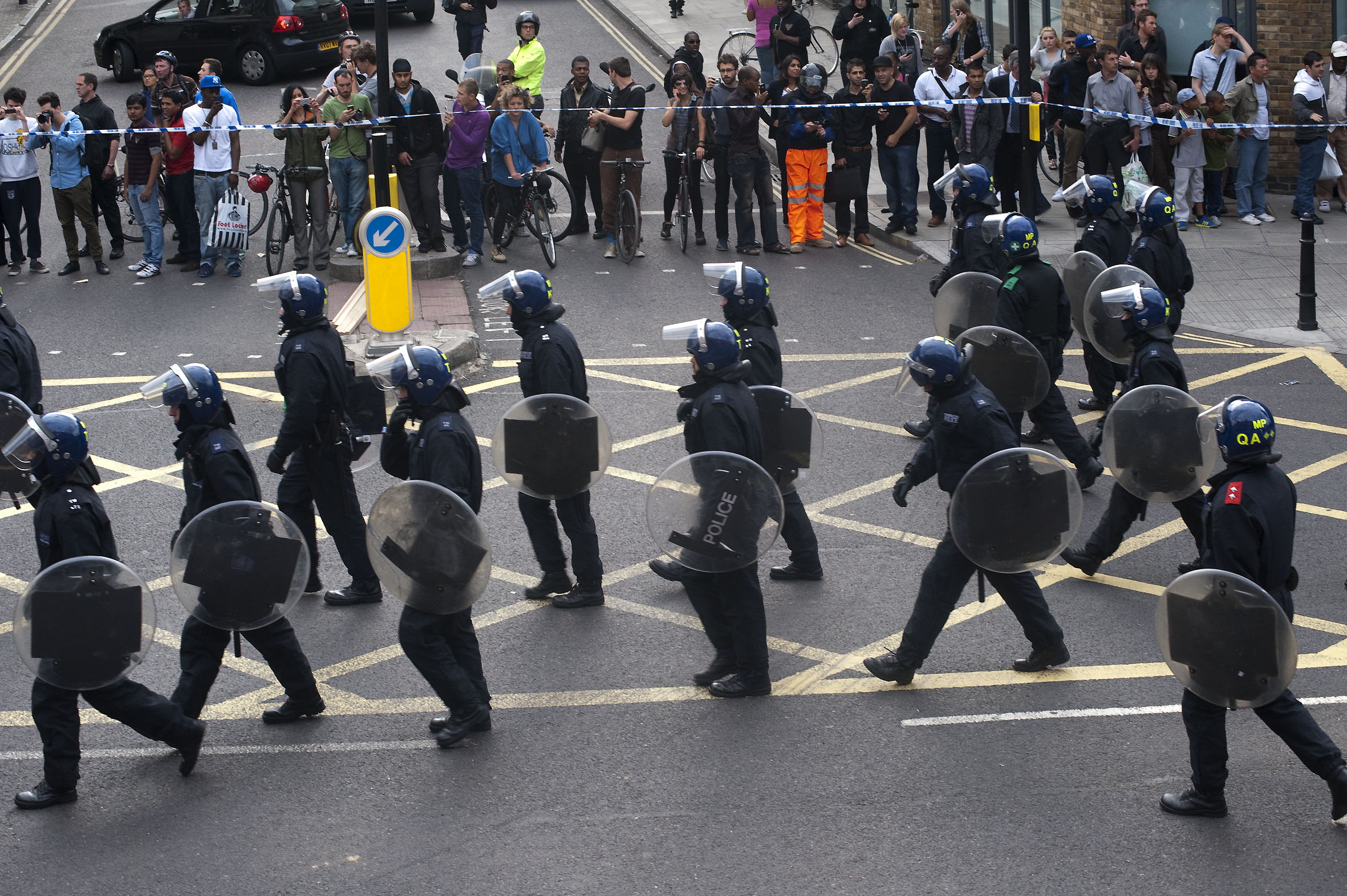 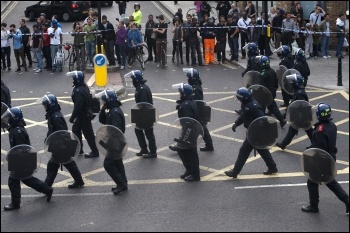 Mark Duggan was not holding a gun and was not threatening the police, yet he was shot twice and killed. There is no explanation for why a gun was found 20 feet away behind a fence. There was no forensic evidence on the gun. The taxi driver was dragged from the car by police, pinned to the ground, and told: “Do not move your head. Do not move. Do not look there. If you move, I will shoot you”.

The police lied that Mark Duggan shot police first, and further provoked anger by refusing to meet with the family. The police were shown to have lied in court. And yet the inquest has decided that this was a lawful killing.

“The majority of the people in this country know that Mark was executed. We are going to fight until we have no breath left in our body for Mark and his children. No justice, no peace!” Carole Duggan, aunt of Mark Duggan, shot dead by the police in August 2011, eloquently expressed her and her family’s shock and fury at the verdict.

The verdict has rocked his family and caused anger across communities. How can it be lawful to shoot dead an unarmed man? In the evening the Duggan family gathered at Tottenham police station with a group of supporters, where Carole explained: “We’ve come to fight for justice in a peaceful way”.

That evening an eerie quiet reigned on the streets of Tottenham as masses of police patrolled and people in the local community chose to stay at home. But workers and young people across Tottenham have expressed to the press and to Socialist Party members their anger at the verdict – though many admit to not being surprised that the justice system has once again failed a young black man.

Some of the media has accused Mark Duggan of being a gangster planning a killing although no evidence of this was given at the inquest. But whatever Mark Duggan was or wasn’t is not the point – justice can never be delivered by extrajudicial killing.

It is to be expected that the right-wing press will resort to smears and stereotypes of the victim, his family and the Tottenham community. The Daily Mail, for example, had the inflammatory headline “violence erupts” to describe the understandable anger and disbelief of the family when the verdict was announced.

Hatred of the police and distrust of the justice system will only increase as a result of this outcome. Proposing that firearms officers wear video cameras will not assuage this as police seem to hope. Broadwater Farm community worker Clasford Sterling makes the point in the Guardian: “It’s fine until the police have a problem, and suddenly you find that camera ain’t working. It all comes back to the integrity of the police, and we’ve already been told that they can’t do anything wrong”.

333 people have died in police custody since 1998. Black people are 28 times more likely to be stopped and searched than white people and are also disproportionately more likely to be tasered or injured on arrest or in police custody. Mark Duggan is not the only person shot dead by the police: other notorious cases include Azelle Rodney who was shot dead in 2005, and Jean Charles de Menezes, the innocent Brazilian who was gunned down at Stockwell underground station in 2005. 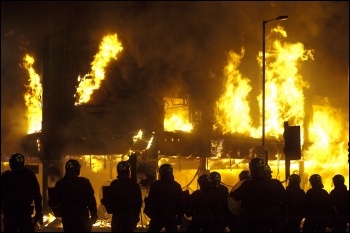 Mark Duggan’s killing was the spark that led to riots in the summer of 2011. Hatred of the police was one of the factors behind the riots but they were also driven by seething anger at poverty, massive youth unemployment, brutal cuts to youth services, and the removal of EMA student payments.

Since 2011 nothing has improved in Tottenham. The promised money agreed by Tory London mayor Boris Johnson and local government minister Eric Pickles to regenerate the riot areas has not materialised. In fact cuts to benefits, pay, jobs and services have deepened. 41% of children in Tottenham live in poverty. Despite a campaign of young people in the borough led by Youth Fight for Jobs, the youth clubs that were shut down just before the riots have not been reopened.

The only measure Boris Johnson seems to be seriously considering is the purchase of water cannon. This is undoubtedly intended to continue the mass intimidation of young people to try to prevent them from expressing their discontent – but is also a warning to anyone who plans to resist the austerity measures and repression meted out by Johnson and the Con-Dems. This massively expensive weapon will not solve any of the problems faced by Londoners – in fact its use will aggravate the situation.

Just four months before the riots, the Socialist warned: “The scenes of despair and explosions of anger like those of 1981 will be back on our streets. Deprived areas of major cities – if not the central areas, then the ‘banlieus’ or outskirts as in France – will be the scene of new conflagrations”.

Those conditions that led to the riots have only deepened. In the absence of an alternative, a mass organised fightback against austerity, it is likely that such blind explosions of rage will happen again. Youth Fight for Jobs and the Socialist Party will be campaigning on the streets of Tottenham and other areas again to offer a way of organising and campaigning; and an alternative to this brutal system of cuts, poverty, racism and police brutality.

A thousand people gathered outside Tottenham police station on 11 January in protest at deaths in custody and in remembrance of Mark Duggan. #NoJusticeNoPeace

Standing up for Tottenham

I arrived at the vigil and the first thing I noticed was a big police presence. To me, as a member of the local community, they were more of an inflammatory than a calming presence. Lots of people from Tottenham turned up.

There were a lot of familiar faces and a wide range of ages and parts of the community – white, black, Turkish, Pakistani and many more.

It felt comforting to see such a large turnout and the sense of the community pulling together. The police presence proved unnecessary.

People were angry, but the overall feel was one of compassion for Mark Duggan’s family who were very distraught.

Many speakers got up and spoke of the loss of loved ones at the hands of the police. This raised shouts of “murderers” from the crowd, and it was people of all ages making the accusation.

My community is very distrustful of police due to the heavy-handed tactics they employ here.

There were shouts of support when speakers asked, where is our local MP, David Lammy? As one speaker put it: “in the past Bernie Grant (the former left-wing Labour MP) was with us at every stage”.

In the press Lammy said that he refused to share a platform with anarchists. But this was a gathering of local people, community groups, trade unionists and church groups.

There is a gap in representation of working class people locally. We need councillors and MPs prepared to speak out against police violence and harassment, and to demand resources for the community.

The youth services closed by the Labour council before the 2011 disturbances should be re-opened for example.

Many of us are planning to stand locally against cuts as part of the Trade Unionist and Socialist Coalition.

Also campaigners from Youth Fight for Jobs and the Day-mer Turkish and Kurdish youth organisation discussed plans to campaign against high youth unemployment in the area and against the closure of youth services.

An issue for all socialists

When I heard about the verdict on the death of Mark Duggan I felt frustrated and disappointed. It came shortly after revelations that the police and the media had worked alongside the Thatcher government 30 years ago to defeat the miners’ strike and destroy the NUM and other unions.

We always knew that the Thatcher government was prepared to use the power of the state, including the judiciary and the police force, to undermine the miners, individually and collectively, in order to weaken the working class.

Here, immediately after the shooting, the Metropolitan Police issued a press release claiming that Mark Duggan was part of a gang of violent drug dealers, and that he had emerged from the taxi shooting at police officers.

It was several weeks before the Met corrected this version of events, by which time the damage had been done – the image of Mark Duggan as a violent criminal was in the media and in people’s minds.

Even on the day after the verdict, one tabloid newspaper claimed that Mark Duggan “deserved” to be shot at by the police.

As with the Hillsborough disaster, it appears that the police officers who had been present at Mark Duggan’s shooting met together a few days later to confer and write their statements about the incident.

Some people still don’t believe that the police would mobilise against the miners which shows that if you’re not part of the struggle the forces of propaganda will win.

As socialists we need to be involved in the struggles of minorities against racism.

This version of this article was first posted on the Socialist Party website on 10 January 2014 and may vary slightly from the version subsequently printed in The Socialist.