From The Socialist newspaper, 22 January 2014

Editorial from the Socialist issue 795 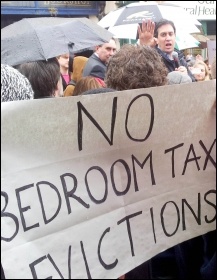 Ed Miliband and his shadow cabinet are going hell for leather with speeches and newspaper columns. They want to show how fit they are for election in 2015.

But who are they trying to impress? Certainly not working class people - or even the middle class Miliband claims to now defend in the election pledge top trumps he is playing with the Tories.

The up to 1,000 families falling into debt each month because of the Coalition's cuts to council tax benefit, implemented by Tory, Lib Dem and Labour-led councils, will certainly be on the look-out for policies that promise relief from the ongoing misery of austerity.

Similarly those forced to request specially prepared 'kettle boxes' from food banks, ie products that can be prepared by adding boiling water, such as instant soup, mash and just-add-water porridge.

A 'cold box' food parcel has also been created, containing three days' worth of mainly tinned groceries that can be prepared without the need for heating or hot water for those in even more dire straits.

In a further bid to compete with the Tories, Rachel Reeves, shadow work and pensions secretary, announced Labour's plans to introduce further sanctions to those struggling to find a job.

Those who do not perform well in maths and language tests could lose their benefits under Labour.

In May the Office for National Statistics announced the highest number of vacancies since 2008 - 503,000.

But there were 2.52 million unemployed, over a third of whom had been out of work for over a year.

Nationalising the banks under democratic workers control and management, as well as major taxing of the cash hoards of the super-rich, could help finance a massive programme of socially useful job creation and training.

Part of that could be building quality council housing and renovations to deal with the devastating and spiralling housing crisis - not Labour's increased competition between building companies.

Miliband and Labour have shown they have precisely nothing to offer working people and all those suffering the cruelty of austerity.

Writing in the Financial Times Janan Ganesh hit the nail on the head in summarising that, with the slew of pledges emitting from Labour HQ, Miliband is "evangelising for popular capitalism".

Capitalism, be it Miliband's 'responsible' variety or not, is a system based on private not popular ownership of the wealth of society.

Labour's proclaimed hopes that the provision of choice, competition and regulation will rein in all the excesses is dead in the water.

Oxfam's latest figures expose the reality - today 85 people own as much wealth as the poorest half of the world's population! This is the utterly and fundamentally unequal system that Miliband is defending.

Labour has called for 'more competition' to shake up the banks and house-builders, as they suggested regarding the energy companies at the autumn conference.

But it wasn't that call last October which people warmed to - it was the call to freeze energy prices, which chimed with the popular mood for nationalisation of the energy companies.

But the venomous Daily Mail and other right-wing tabloids went for Miliband, seeing it as an opportunity to crush any perceived diversion from pro-market fundamentalism.

Now Labour is running away from anything that makes even the most modest challenge to the big corporations.

Thatcher claims her proudest achievement was Blair and his pro-capitalist New Labour. Ganesh correctly writes: "Had the late UK prime minister lived to see Ed Miliband propound her own economic vision, the frisson of intellectual hegemony would have been even headier."

This touching faith in 'competition' betrays Labour's incapacity to put forward an alternative to austerity.

This is because today the Labour Party is an outright capitalist party. As Labour 'rising star' Chuka Umunna says: "we're all capitalists now".

Not so. Experience of capitalism means greater numbers recognise that what is needed is not tinkering around the edges but a socialist alternative.

A socialist economy would have to be a democratically planned economy. This would mean bringing all the big corporations, controlling around 80% of the British economy, into democratic public ownership, under democratic working class control.

Socialists argue that such an alternative is possible but it requires mass working class action. As the creators of wealth, workers, when they are organised and have a determined leadership, have enormous potential power.

They need organisations armed with the ideas and understanding of how to change society. If you agree - join the socialists.

While Miliband's attack on the bankers and the 1% has all the intensity of being savaged by a sheep, Labour's real attacks have been reserved for the trade unions and the remnants of the collective voice of the working class that still pertain in the party.

But Labour's attempts to expel the unions' voice will provoke questioning among workers about how to ensure they have a political say.

Worldwide millions of people are fighting back against the reality of capitalism. In South Africa the miners are preparing to strike once again for wages they can live on.

It is these workers who took the first steps, along with socialists in the DSM (sister party of the Socialist Party in SA), towards building a new mass workers' party with a socialist programme including nationalisation of the mines, living wages for all and a break with capitalism.

Here the Trade Unionist and Socialist Coalition, involving the RMT and leading trade unionists, is a precursor to fulfilling a similar role. Get involved.

Councillors can make a difference... but only if they are prepared to fight

Next May there will be elections in England for over 4,000 councillors in local authorities across the country.

To get what the BBC calls 'balanced media coverage', parties need to contest 15% of the seats up for election - that means 625 TUSC candidates. Could you be one of those?

Come along to the conference and meet other prospective candidates and TUSC supporters who are building an alternative to the austerity parties in their areas.

Capitalism is a system in crisis

What exactly is the point of Labour?

"Ireland is a success story" rhetoric is based on spin

An open letter to Tristram Hunt

Protest against Atos 'assessments' on 19 February

Benefits Street: A caricature of poverty