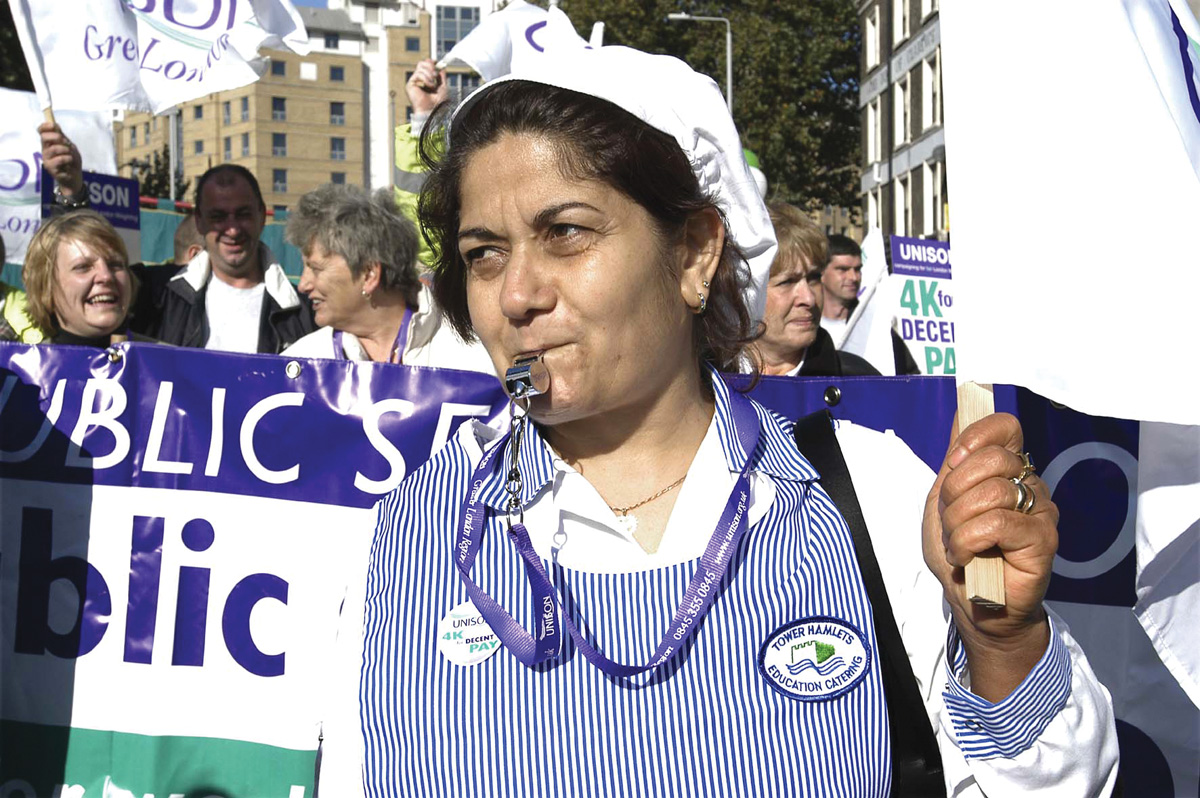 Fighting for a living wage 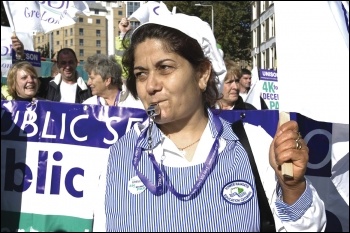 Labour-run London borough of Camden is accredited as paying at least the living wage.

However, it has passed on some of the Con-Dem cuts by introducing performance-related pay to reduce its overall pay bill.

And the living wage does not cover all its subcontractors; it is asking them to commit to it, only when their contracts are renewed, which in some cases is years away.

Camden Unison is currently running a major campaign for school meal caterers in the borough to be paid the London living wage of £8.80 an hour. Bob Severn spoke to two Unison reps – Jane and Alysha – about their campaign.

Alysha: The job we are doing is the same service that you would get in a top-quality restaurant. The difference is we’re dealing with children, so there are a lot more procedures in place. We’ve only got three to four hours to do all that work in. We are extremely underpaid because £6.31 (the minumum wage) an hour is just not good enough.

Alysha: I have seen 60 year old women doing the jobs that you’d expect someone my age – and I’m 28 – to do. How can you expect someone who’s 60 years old to push those heavy trolleys? They’re big metal trolleys and they’re hot.

Alysha: They don’t take into consideration grieving. When my grandmother passed away – my grandma raised me – I was heartbroken. I only got three days off, one day unpaid.

Jane: I can’t manage on this wage, I just can’t. Every month I’ve got stress.

Am I going to have my money there to pay all my bills? If I’m sick it’s: ‘oh my god, well I’ve now lost that wage. How am I going to pay that bill?’

You shouldn’t be under that stress. I’m not the only one – we all feel like that.

Alysha: We’re all in the same boat, we’re all in it together, yet you see catering workers in our neighbouring borough Islington getting paid £8.80 for doing exactly the same job.

Our company have got contractors within that borough who are getting paid £8.80. Why them and not us?

Jane: Islington local government gave them the money to do it – Camden won’t do it. That’s what we were told.

Bob: What are the aims of your campaign?

Alysha: Our aims are to get £8.80 an hour for every single worker, get sick pay and be treated like people not animals. We will keep campaigning until we get what we’re entitled to.

Jane: At the end of it there’ll be a massive headache but it’ll be worth it because we’ll win it.

Alysha: The union’s making people feel at ease, that there is someone there to fight for you.

A lot of us are bringing our work home with us. Because when you come home you’re tired, your kids aren’t seeing the best of you either. With me I’m moody – my poor son – they don’t see the best of you.

Bob: So what are your plans?

Alysha: We’ve got a mass meeting for us reps to explain the changes that we want implemented and what the company have said and what steps will be taken after that.

Jane: If the workers have any questions, we’ll try and answer them as best as we can.

Alysha: We’ll have a demonstration in September 2014. This campaign has been going on since September 2013, already we have made…

Jane: …quite a big bit of progress

Alysha: But we just have to stay united, supporting each other, and keep putting the pressure on the bosses until we do get £8.80 an hour and do have better working conditions.

For example: uniforms that actually fit us, kitchens that have proper equipment in it, health and safety shoes – a hairnet for everyone! People are having accidents…

Jane: …because they haven’t got the proper equipment.

Alysha: They’re giving all these different excuses on why they’re not providing it.

There needs to be more structured procedures in place when it comes to things like lateness, sickness, sick pay, holiday pay – all of these things which are in the proposal.

This is what we’ve gotta fight for and if it comes to a strike we’re willing to strike all the way.

Jane: That’s it. Everyone that’s joined the union will be out. We’ve got more and more members joining, and if they all go out then that’s the kitchens closed.

The National Shop Stewards Network (NSSN) is using its 2014 conference on Saturday 5 July to help build the growing campaign for a £10 an hour minimum wage.

Ginger Jentzen from the victorious Seattle $15 Now struggle will speak about a campaign that is a beacon for millions of low-paid workers in the USA and around the world. Alongside Ginger will be Ronnie Draper, the general secretary of the BFAWU bakers’ union. The BFAWU became the first union to call for £10 at their conference in June and have now been followed by the GMB.