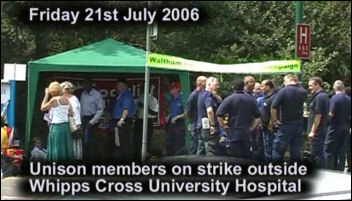 NEW LABOUR Health Secretary Patricia Hewitt has not only pledged to ‘balance’ the National Health Service’s books this year. She also wants it to make a £250 million yearly surplus! Would the government demand that the Army in Iraq make a profit? No. But the NHS, apparently, is different.

The London Strategic Health Authority, for example, met recently and talked in a clinical, coded way about reducing the NHS’s ‘financial risk’ from ‘in the red’ to ‘turning to amber’. How would they do that? By more bed and ward closures, huge job cuts and even hospital closures!

The government’s crazy NHS policies – based on creeping privatisation and the market – are ruining many hospitals nationally. The crisis is deepening nationwide, as shown by the crisis facing Queen Elizabeth Hospital in Woolwich, south London (see article right).

The anger is being felt around the country, too. Last weekend, an estimated 4,000 people marched in Whitehaven in Cumbria to warn the local health trust to keep their hands off local hospitals.

The campaign is on to make sure this anger is turned into action. UNISON, Britain’s biggest health workers’ union, has been surveying its members about a national demonstration on the NHS.

The most important next step is to rally health workers, community campaigners and others on a national Saturday demonstration through the streets of central London. People United Saving Hospitals (PUSH), the national umbrella group for local ‘save the NHS’ campaigns, has agreed to call a demonstration on Saturday 3 March, 2007.

Health campaigners must tell UNISON and the TUC to organise urgently for a national demonstration against attacks on the NHS on 3 March.