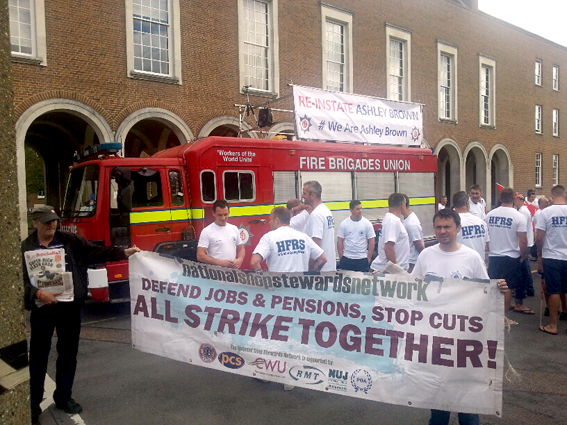 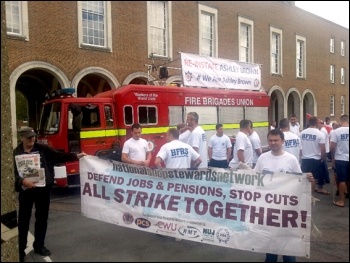 FBU members protest in Hertford against the sacking of firefighter Ashley Brown, 15.7.2014, photo by Neil Cafferky   (Click to enlarge: opens in new window)

Fire Brigades Union (FBU) members have engaged in a further eight days of rolling industrial action in defence of their pensions from government cost-cutting attacks. FBU members were prominent on the recent J10 strike demonstrations and protests.

However, management at Hertfordshire Fire and Rescue Service have, vindictively, sacked FBU member Ashley Brown for commenting about the union’s strike action on social media. In response a FBU solidarity rally (above) of over 100 was held on 15 July as county councillors met in Hertford. FBU general secretary Matt Wrack addressed the solidarity rally.

21 electricians, members of Unite, working for Hackney Homes in east London, have taken their second set of two-day strike action.

Hackney Homes is the arms-length management organisation (Almo) that runs Hackney council’s housing. Workers are angry after having unfair work targets imposed on them in November 2012, which has resulted in some electricians facing a 20% cut in their salaries.

Hackney Homes bosses have also disciplined 50% of electricians for failing to meet these unreasonable targets.

In the last financial year Hackney Homes made a surplus of £1.4 million on that proportion of their annual budget assigned to the direct labour force, yet to change these unfair targets would only cost Hackney Homes about £20,000.

The electricians are demanding that Hackney Homes rescind the disciplinary action and that the current targets are replaced with genuinely fair and achievable targets.

Management at Lambeth College in south London has threatened its most vulnerable students in an ongoing campaign to tear up workers’ contracts.

Members of lecturers’ union UCU recently struck against changes for five and a half weeks. This was the union’s longest ever action. Support workers in Unison also walked out for five days.

Strikers made an orderly return to work on Wednesday 9 July, in time for the summer break. They had succeeded in forcing management to the negotiating table.

His captive? Courses for students with disabilities and learners of English as a second or other language (Esol).

However, with no concessions on offer, UCU plans to re-ballot next term.

Esol courses alone generate around 40% of the FE college’s income. UCU has declared it will “not be bullied by outlandish threats”.

The telecoms executive of the Communication Workers Union (CWU) has concluded an interim agreement with BT which will see new recruits to the company earning from £5,300 to £8,053 a year less.

On top of this the working week is extended by 1.5 hours, there are no enhanced overtime rates for Sundays and bank holidays and sick leave entitlement is half that of existing BT employees.

The union executive says this will help BT to recruit direct labour rather than use third party contractors, and repatriate work currently done offshore. There is absolutely nothing (except greed) to stop BT repatriating all off-shored work on existing pay and conditions. There is no better illustration of a ‘partnership’ approach with employers which can wipe out previously hard-won gains.

Read how four Socialist Party members defeated victimisation within their own union.