Link to this page: https://www.socialistparty.org.uk/articles/19040 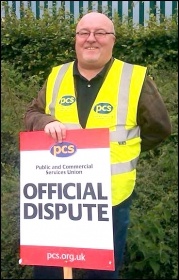 PCS members in HMRC have been taking strike action for one day as part of a regional rolling programme of action on one of the three days from Wednesday 30 July to Friday 1 August.

This follows action taken in June, which afterwards saw the concession of 2,500 permanent posts being advertised. PCS members in HMRC are now continuing to challenge HMRC management on a number of issues: 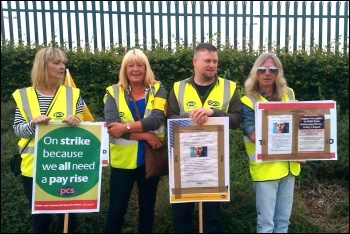 Kevin McHugh, PCS national deputy president, spoke to the Socialist on the picket line at Benton Park View, Newcastle upon Tyne, about the strike action:

"The strike is about a number of issues, mainly around jobs and staffing. HMRC say we are hitting people who are claiming tax credits during a peak period, but we are doing this to highlight the shortages and the cuts in jobs that HMRC have planned.

HMRC have moved over 4,000 staff onto telephone lines to deal with the peak. We maintain if they stopped the cuts they would have adequate staff to handle the workload.

Despite this crisis HMRC still plan to cut 10,000 jobs in the next two years. On this site 400 fixed term appointments are due to be sacked in September, 4,000 around the country.

There is work for them so we demand that they are given full-time jobs so that we can give a good service to claimants.

Meanwhile Lin Holmer, chief executive of HMRC was recently given a £20,000 bonus. This is more money than 80% of the staff on this site earn in a year! Those staff were given just a 1% pay increase."

PCS members in HMRC in Leeds joined the strike on Friday 1st August. This is part of an ongoing dispute over wanting staff to be 'flexibly resourced' into covering jobs lost during cutbacks in call centres. 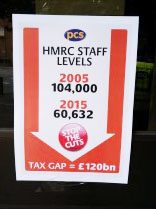 As PCS placards on the picket line graphically showed, staffing levels have been drastically cut over the last few years, dropping by 40% in the last ten years.

This is the reason for the staff shortages in the call centres which are being plugged by drafting workers from other sections of HMRC in to cover.

Yet despite this, HMRC still plans to cut a further 10,000 jobs over the next two years.

While this goes on, disgust amongst HMRC workers is increasing against their management. In the last few weeks they've been found to 'overstate' the amount of extra tax revenue they have been bringing in by a staggering £1.9 billion!

As Elliot, one of the HMRC reps at Castle House in Leeds explained: "HMRC seems to be in the press every few weeks for some sort of scandal. Yet our chief executive received a £20,000 bonus despite all this!".

This version of this article was first posted on the Socialist Party website on 1 August 2014 and may vary slightly from the version subsequently printed in The Socialist.