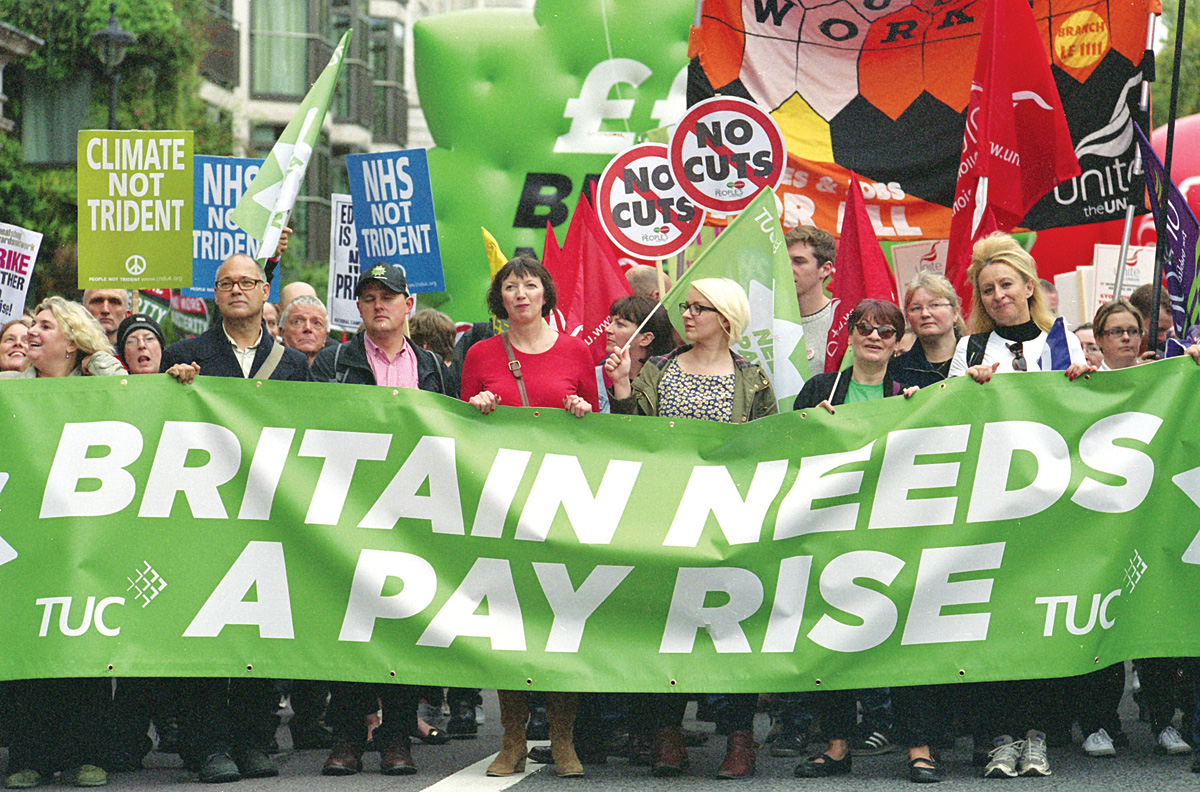 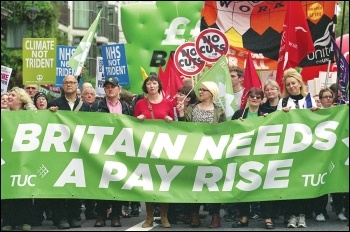 The TUC banner at the front of the 18 October 2014 demo, followed by the Unite Housing Workers branch, photo Paul Mattsson   (Click to enlarge: opens in new window)

Around 100,000 trade unionists and supporters attended the TUC’s ‘Britain Needs A Pay Rise’ demonstration in London on Saturday 18 October.

Trade union contingents from all the major unions – and smaller ones – lined up along Embankment to march to Hyde Park. The protest was against the on-going erosion of wages, on average £50 a week down in real terms since 2007. Marchers were enthused by the demo and the support it had received.

At the Hyde Park rally, speaker after speaker correctly condemned the attacks upon workers by the government in both the public and private sectors.

PCS general secretary Mark Serwotka called for national trade union coordinated action and expressed disappointment that the 14 October local authority strikes had been called off. He praised the Fast Food Rights protest that took place outside McDonalds during the course of the day.

But the overwhelming impression from the Labour-affiliated union leaders was ‘wait for a Labour government’. Len McCluskey at least said: “I say to Labour – stop being scared of your own shadow. Don’t shrink what you offer the British people.”

He also said: “But we need to do more than just march.” Unfortunately he didn’t spell out how we were supposed to organise other than build the trade unions. There was nothing said about his previous statements about the possibility of a new party after the general election if Labour was to continue its ‘austerity-lite policies’.

Unison general secretary Dave Prentis came onto the platform with representatives from the Doncaster Care UK strike. These workers, he said, had been on strike for 90 days and the union was proud to represent them.

He congratulated health workers for their action, especially the midwives “for taking strike action for the first time in history”. But Prentis also said that further action would be taken “if needed” in November.

Perhaps in response to some in the crowd shouting “strike now” and going off his prepared speech, he indicated that maybe the local government workers should not accept the new pay offer on the table.

As one person at the National Shop Stewards Network stage at Speakers’ Corner said: “Even mathematicians can’t work out if the new offer is better or worse than the original offer!”