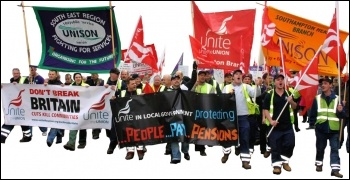 Steve Score, Editor of the Socialist

When people are losing their homes because of the bedroom tax, when 93,000 children are homeless, when parents in this country have gone without food so their children could have something to eat, when cuts and privatisation in the NHS threaten people's lives...

Something is very wrong with this society.

When the number of ultra-rich individuals (who own more than £20 million each) is rising rapidly, and as a result the trade in superyachts, private jets, classic cars and high value jewellery is booming...

The Socialist Party puts forward the alternative, a socialist solution. And the Socialist is one of the key tools to get this alternative across. This week the Socialist has launched its revamped paper, which we hope that will be even better for that purpose!

Millions of people know that what they face is wrong. But the alternative doesn't often get heard - not in the mainstream media at least. We get treated like mushrooms - kept in the dark and fed on bullshit! No wonder when the main papers are owned by multi-billionaires like Rupert Murdoch - it isn't in their interests to challenge the profit system.

You may have noticed - an election is on the way. Despite Labour's claim it will hold "four million conversations", they and all the main capitalist parties will fight it mainly through the TV and the press - with wall to wall coverage.

Just as these parties are arguing about how fast to make the cuts rather than whether to make them at all, the press will play up their differences and cover up their similarities. They all operate on a common assumption - there is no alternative to austerity, and the system cannot be fundamentally changed.

The Socialist can help to challenge that assumption.

It can help to build the fight to change things. It is the Socialist which has had detailed coverage of where that fight is taking place, written by those involved in the struggle themselves, reporting from the frontline - firefighters, health workers, public and private sector workers striking to defend jobs, pensions, pay and conditions. Where else do you get that? Young people report on their experiences of zero hour contracts, low pay, and the debt that results from trying to get an education.

Unlike the capitalist papers, the Socialist is written and sold by our own members and supporters. We don't have large numbers of professional journalists, but we have something the main papers can't match - you! We potentially have thousands of reporters. We need you to tell us about what makes you angry, what motivates you and what you are doing about it.

We report on the battles, not just in this country, but around the world. Take the inspiring example of the massive anti-water charges movement in Ireland - where Socialist Party members, including three MPs, have played a leading role in the battle. We covered this in a way that no other paper could.

But we also put forward a strategy and a programme for how the struggle can go forward: Look at the material we have had from our sister section in Greece on the programme Syriza should be carrying out to fight the imposition of austerity by the European Union.

In the election campaign the Socialist plans to deal with the issues: NHS, education, low pay, housing, council cuts, while campaigning for a vote for the Trade Unionist and Socialist Coalition (TUSC). We want to supply the ammunition for the street battle with the other parties!

We aim to provide the arguments for campaigners to use in the shopping centre, on the doorstep and in the workplace and college. We will report on TUSC's activities and share ideas on the best ways to campaign.

But we don't just want votes from this election campaign. We need more people to get active! We want you to join the Socialist Party, and get others to join as well.

We point out the glaring injustices in society, and highlight the struggles that are taking place. But we also explain the socialist alternative - the articles we have in our centre pages, and the features that elaborate on our ideas, can convince people to get involved, and stay involved, in the fight.

One of the ways to build this alternative is to sell our paper. If you don't have a subscription to the paper, fill in a direct debit form guaranteeing you will get it every week. Try to get others to do the same.

Consider selling the Socialist yourself. You can sell the paper at work, at college, to friends, even to people you get chatting to at the bus stop or in the pub!

Just as we aim to eventually build a mass party with clear socialist ideas, we also aim to have a mass daily workers' paper. This newly redesigned socialist is a step in that direction and you can help us get there!