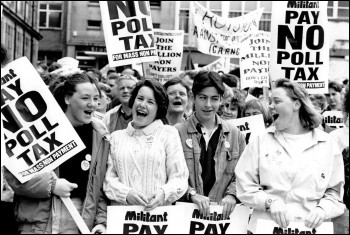 The battle against the so-called 'poll tax' was one of the biggest movements of working people against a modern British government. Millions refused to pay; many millions more simply could not afford to pay. Mass non-payment beat the tax and finally removed Margaret Thatcher from office.

The poll tax, officially called the Community Charge, was a flat-rate levy on all adults to pay for local council services. With some partial exceptions, the poor were to pay the same as the rich. It was proposed by Thatcher's Conservatives to replace the more progressive 'domestic rates'.

These mass lobbies built more anti-poll tax unions, and consolidated the slogan "can't pay, won't pay". Unfortunately, this did not become the mantra of Labour's leaders. Instead they urged people not to break the law while openly attacking leaders of the anti-poll tax movement.

The London mobilisation was peaceful and good humoured, but was brutally attacked by police. Thatcher's Tory government had used violent tactics on numerous previous occasions, including against the heroic 1984-5 miners' strike and 1986 London printers' strike.

As demonstrators defended themselves, rioting broke out - but the vicious police assault backfired. Too many people on the spot and watching on television had seen a peaceful, mass demonstration broken up by police brutality. The rioting itself was a reflection of the discontent that existed in Thatcher's Britain.

Summonsing non-payers to court was intended to scare people into paying - but the Federation turned it into its opposite. Thousands turned up to contest cases in Newport, clogging the courts and forcing magistrates to dismiss all cases and pay expenses to those summonsed!

This tactic of mass turnouts at court was replicated by other local anti-poll tax unions. Many tens of thousands of cases were dismissed or never heard. Our legal campaign also resurrected the tradition of 'McKenzie friends', where non-lawyers could assist, and sometimes represent, defendants in court. Within a short time the Federation had such representatives at most court hearings.

The last resort for the Tories, and compliant councils of all political colours, was to try and jail those who had beaten off the courts and bailiffs. Grantham, Thatcher's home town, led the way by jailing a young building worker just before Christmas 1990. There was uproar.

After a big local demonstration, the governor at HM Prison Lincoln fast-tracked his release! The last thing many prison governors wanted was poll tax non-payers stirring things up inside. Jailings continued, including that of MP and Militant supporter Terry Fields. Shamefully, the leaders of the Labour Party refused to back non-payment. But Militant said: 'it's better to break the law than break the poor'. In any case, the Federation, local anti-poll tax unions and supporting lawyers ensured jailings were kept to a few hundred. Many thousands avoided imprisonment.

A short while later, in what must be one of the understatements of all time, Tory MP Michael Heseltine stood in parliament and said of the poll tax: "The public have not been persuaded that the scheme is fair." 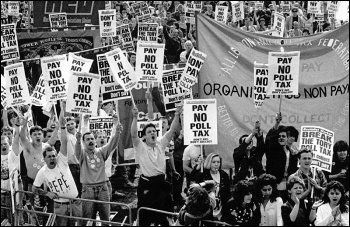 A deafening chorus of "No Poll Tax"