Reverse all cuts and privatisation 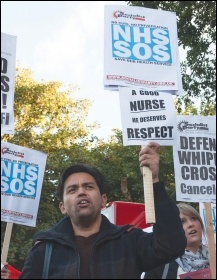 The scene: a Medical Incident Officer - a standby doctor normally called upon for major accidents - arrives at Worcestershire Royal Hospital to treat patients who have been waiting for hours, untreated in ambulances outside the hospital. Can there be a clearer example of an NHS in crisis?

Accident and Emergency waiting times at Worcestershire Acute Hospitals NHS Trust hospitals saw only 77.9% treated within four hours in the week ending 19 April, compared to the national target of 95%.

This is the NHS trust where five A&E consultants quit on the same day as they felt trust management had undermined Alexandra Hospital in Redditch. This is the same NHS Trust which tried to ban an ambulance paramedic from "their" premises when he raised safety concerns.

Trust chairman Harry Turner has admitted the hospital is too small. It was designed to treat 45,000 A&E patients per year, but is expecting 75,000 this year, rising to 95,000 in future.

It was conceived it seems to serve only Worcester, but takes patients from south Worcestershire as well. No-one in authority anticipated this as it would have meant looking at a map!

Clearly local A&E provision is inadequate. The Royal Worcestershire is yet another hospital in crisis due to cuts and privatisation (see box). Only the Trade Unionist and Socialist Coalition stands for a properly funded, high-quality, free National Health Service under democratic public ownership and control.

I spent a week in Worcestershire Royal a year ago. The care and treatment I received was out of this world. State of the art equipment, pioneering techniques and amazing staff all contributed to my clean bill of health. However, the financial black hole faced by the NHS trust means that the future of such treatment is at risk.

It was built in 2002 under New Labour using the Private Finance Initiative (PFI). By 2032 when the contract ends the NHS will have paid £852 million, over ten times the original construction cost. Annual repayments to PFI company Catalyst are £25-£30 million.

The problems which Worcestershire hospitals currently face go back a long way. In 2005-6 Worcestershire Acute Hospitals NHS had a £31.8 million deficit, £7 million of which was due to PFI. Since then we've been fighting cuts in jobs and services.

The trust's Kidderminster Hospital has lost its A&E. Campaigners have seen off concerted attempts to close children's services, maternity services and are currently fighting against the proposed closure of the A&E at Redditch's Alexandra Hospital.

After the election: prepare for the battles to come

And the rich just get richer!

Why you should join the socialists

Why the Trade Unionist and Socialist Coalition?

May Day Greetings in the Socialist 2015 - pdf