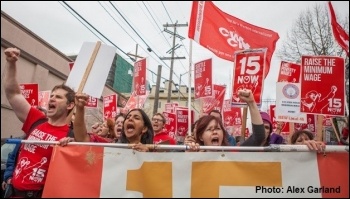 Socialists have led a successful fight to increase the minimum wage in Seattle, photo Alex Garland   (Click to enlarge)

Philip Locker, Socialist Alternative (co-thinkers of the CWI in the US)

Boldly calling for a "political revolution" against the "billionaires and oligarchs" who have hijacked the political system, Bernie Sanders, the only self-described socialist in Congress, has launched an insurgent campaign for president.

Contradicting the cynics who say Americans are hopelessly apathetic and conservative, his announcement has been met with a tremendous wave of enthusiasm.

This campaign can gain a big echo among the millions who are disgusted by corporate politics that is making the rich richer while living standards for the rest of us are increasingly lagging behind.

His campaign stands in sharp contrast to the waffling and empty rhetoric of Hillary Clinton and other establishment politicians. He was one of the few members of Congress who voted against the Patriot Act in 2001 and calls for dismantling the NSA's domestic spying programmes.

He stands for bold action to address climate change, demanding a rapid transition away from fossil fuels towards energy efficiency and renewable energy.

Socialist Alternative welcomes Sanders' decision to run for President to help create, as he says, "an independent voice, fighting for working families" to "bring the fight to Wall Street and corporate America." His campaign will give Hillary Clinton a much deserved challenge and will widen the spectrum of political discussion, injecting some working class reality into the increasingly surreal and narrow parameters of official debate.

However, in our view, Sanders is making a fundamental mistake by running in the Democratic Party primary. Instead, we have argued that he should run as an independent to help build a political alternative to the corporate-owned political parties.

This contradiction will be posed starkly when Sanders loses the Democratic primary. Sanders has said he will endorse the Democratic nominee - very likely to be Hillary Clinton, or if Clinton stumbles badly another safe pro-business Democrat.

This will mean that those mobilised by Sanders will be told to support a pro-corporate Democrat, the exact opposite of a revolution against the billionaires and oligarchs. This could result in the demoralisation of those mobilised and a historic lost opportunity.

When the Democratic machine blocks him, Sanders should continue running in the general election as an independent. Such a step would go against Sanders' stated intention and his general political approach. But it cannot be excluded, depending on how events unfold and how much pressure he is under from his own supporters.

Sanders' platform points in the right direction, but as socialists we would go further. For example Sanders calls for breaking up the huge Wall Street banks, a radical reform which we would support. But far better would be to bring the big banks under democratic public ownership.

While Sanders limits himself to a programme of reforming capitalism along the lines of Western Europe, we stand for a fundamental socialist transformation of society. While the European workers' movements won huge reforms during the post-war period, capitalism was not overthrown.

Under intense pressure the European capitalist classes made big concessions in order to maintain their social and political power, but since the end of the post-war boom have carried out an unrelenting neoliberal offensive to roll back these reforms.

In relation to more immediate political issues, Sanders needs to speak out clearly in support of the Black Lives Matter movement against racist police brutality and mass incarceration.

Also, while Bernie honourably opposed both the Patriot Act and the invasion of Iraq, he has, on numerous occasions, voted for military appropriations. Regrettably, he did not oppose the war in Afghanistan and failed to oppose the recent Israeli massacre in Gaza.

Despite these political shortcomings, Bernie's campaign stands out as fundamentally different from all the other business-as-usual politicians running for President.

To achieve the demands Sanders is campaigning on will require building powerful mass movements of working people. His campaign needs to be strategically orientated towards helping to strengthen movements from below.

Bernie made similar points when he argued: "a campaign has got to be much more than just getting votes and getting elected. It has got to be helping to educate people, organise people.

"If 80 to 90 percent of the people in this country vote, if they know what the issues are... Washington and Congress will look very, very different from the Congress currently dominated by big money and dealing only with the issues that big money wants them to deal with."

Sanders also pointed out that "We can elect the best person in the world to be president, but that person will get swallowed up unless there is an unprecedented level of activism at the grassroots level." The key will be to use the 2016 election to raise the level of organisation, confidence, and consciousness of workers and social movements.

The experience of Socialist Alternative member Kshama Sawant's election to Seattle City Council with 100,000 votes is an example of this. We organised a grassroots force that elected the first socialist in 100 years.

Once Kshama was elected, the momentum from her victory was used to build 15 Now, a grassroots organisation that mobilised hundreds of activists across the city and worked in coalition with trade unions to push through the highest minimum wage in the country at that time.

But experience has shown again and again that the Democratic Party is the graveyard of social movements. The Occupy movement was politically demobilised by elements tied to the Democrats with their appeals to support Obama in 2012.

The Black Lives Matter movement, the Fight for $15, and Occupy Wall Street have greatly altered the political terrain on the issues of racism and economic inequality. By comparison, much of the left poured tremendous energy and resources into electing Barack Obama and the Democrats only to see them advance the agenda of Wall Street.

Activists need to be realistic in recognising the Democratic Party establishment opposes Bernie Sanders and will make sure he does not win the Democratic primary. If necessary, they will use all the tools at their disposal, including their access to big money, the mass media, the authority of prominent politicians, and their control over the party structures.

Sanders' campaign could play a critical role of helping to lay the basis for a new political party. A broad left wing or working class party would be an organisation which brings together different struggles and generalises from them a common set of interests, a political programme.

Some on the left object that such an approach would end up weakening the Democratic candidate and help the Republicans to win the presidency. The fear of another Republican president is real and understandable. Socialist Alternative wholeheartedly agrees that the Republicans need to be opposed and we in no way want to see them elected.

But the danger of an independent left-wing candidate tipping a close election to the Republicans is far outweighed by the more important need for working people to begin to build their own political voice.

Further, the big business Democratic politicians have proven themselves incapable of defeating the right-wing policies of an increasingly unhinged Republican Party.

Let us not forget that despite the 'hope' and 'change' of Obama's 2008 campaign, once in power Obama's pro-business policies prepared the ground for the Republican victories in 2010 and 2012 by demoralising progressives and allowing the Tea Party to demagogically tap into anger at the Democrats as the party in power.

We need to break out of the cycle of Democratic disappointment leading to Republican gains, and begin to build a working class political alternative to the Democrats and Republicans. If not now, when?