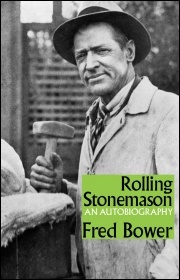 Rolling Stonemason: An Autobiography by Fred Bower - worker, socialist and artist - is a little pearl of a book.

Friedrich Engels, co-founder with Karl Marx of scientific socialism, once wrote that the basic ideas of communism, meaning democratic socialism today, were handed down from the French Revolution by the great revolutionary Gracchus Babeuf.

His ideas were continued in small groups "in the back alleys of France" until they were expressed on a large-scale in the 1830 and 1848 revolutions.

Despite their undeveloped, even primitive, programme, they represented a vital historical thread that in turn led to the development of the working class movement, which did not exist at the time of the French Revolution. This, in time, led the movement to embrace the ideas of scientific socialism of Marx and Engels.

Fred Bower, as this book reveals, embodied a similar process in the British working class, and particularly in Liverpool, with the gradual embracing of socialism, although it came later here than in France.

Bower was born in Boston, USA in 1871, but was brought up in Liverpool. In 1904 he, together with "his pal" the famous Jim Larkin, who was to play a key role in Ireland later, placed a letter in the foundations of the imposing Liverpool Anglican cathedral that they had worked on. The letter was from "the wage slaves employed on the erection of this cathedral dedicated to an unemployed Jewish carpenter".

Three weeks later King Edward VII laid the foundation stone over it, where it remains to this day! But the activities of Fred Bower went beyond displays of cheeky irreverence towards the bosses and their representatives.

He was not only active in Liverpool. He travelled, including to the US, where he met and collaborated with the great figures of the US labour movement.

This included the socialist writer Upton Sinclair and also Jack London, the brilliant voice of the US working class through his speeches and writings, but particularly his great novels.

He paints an intriguing portrait of them and the titanic Eugene Debs, tribune of the US working class, who got almost a million votes in the presidential elections of 1912, the equivalent of probably 6 million today.

However, he spent most of his life as a stonemason in Liverpool, being converted to socialism through the bitter experience of capitalism there and in other cities.

Liverpool was then "the second city of the mightiest empire the world has ever seen". Alongside "immense wealth" there was also "abysmal poverty".

The subsequent catastrophic decline of British capitalism was exemplified by the massive deindustrialisation of Merseyside in the 1970s, reinforced by Thatcher in the 80s.

This resulted in the mass revolt of the Liverpool working-class between 1983 and 1987, led by the magnificent Liverpool City Councillors and in which Militant, now the Socialist Party, played a key role.

These events could be traced back to those like Fred Bower and hundreds and thousands of other self-sacrificing socialist pioneers in the city who heroically laboured, without fanfare, to literally lay the foundation stones of the workers' movement in the city. We today stand on their doughty shoulders.

And theirs was no easy task, as Fred Bower recounts; facing constant threats of eviction from his home, persistent harassment from the bosses for advocating and organising trade unions and, not least, the religious sectarianism which was constantly used to divide the working class.

Bower recounts: "Liverpool then was divided into two camps, Orangemen - Protestants - and Catholics... Each believed the only way to get to heaven was to send the other fellow to hell."

It should be remembered that due to big population movements and other factors, religious sectarianism was pushed into the background in the post-1945 economic upswing. Nevertheless, Liverpool still had 10 'Protestant Party' councillors up to the 1960s.

Bower worked together with James Larkin and others to cement class unity. He writes about the way strikes were broken with the bosses playing off Catholics against Protestants.

Larkin was sent to Ireland to form branches of the dockers' union there: "When the Dublin men struck for better conditions, the boats were sent on to Belfast, to be reloaded by the Orange dockers of Belfast. When the Belfast workers kicked over the traces, the boats were sent to Dublin to be worked on by the Dublin Catholic dockers... Larkin stopped all of that."

Later Larkin and James Connolly successfully organised successful strikes and demonstrations of Protestant and Catholic workers in Belfast in 1907.

Bower emphasises the widespread effect this had, which was brought home to him when he went to his Belfast boarding house one day. The landlady said to him, "Are you a Protestant?" He answered, "Yes, I was brought up so." At which the landlady said: "A month ago I would have cut your throat before I would have let you enter my house. But Mr Larkin has changed all that."

This is not just of historical interest, but shows that unity in action, as the Socialist Party in Northern Ireland have consistently shown on numerous occasions, can overcome generations of suspicion and religious sectarianism. On the other hand, an incorrect approach, even in Liverpool, could resurrect sectarianism, even where it seems to have disappeared.

Adding to our knowledge

Much of what passes for 'labour history' is usually made up of dry, pompous, academic tracts without any attempt to feel the pulse beat of the workers' movement.

This could not be said of this book which readers should buy. Its merit is that it gives us an invaluable insight into how the socialist pioneers raised upon their shoulders the modern workers' movement.

The publishers Merlin deserve our thanks, as do Ron Noon and Sam Davies for their informative introduction, for rescuing and reprinting this valuable book and adding to our knowledge of the history of the workers' movement.