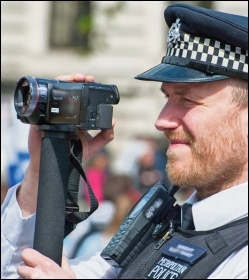 On the last day of term at my school, a staff training session told us how the government expects us to teach "British values'' to the kids.

They said this would be monitored by the Ofsted inspectorate. This was bad enough, what exactly are 'British values'? But it got worse in the last session of the day.

A police officer from the local 'Prevent' unit addressed us about the dangers of extremism facing the kids we teach. He said Prevent is a 'key government initiative to help combat the threat of terrorism in the UK'.

He started by talking about the dangers of Islamic terrorism and then the threat from neo-Nazi groups such as the English Defence League (EDL) and National Front.

He went on to say that the police regard anti-fracking protestors as extremists and referred to the behaviour of Green MP Caroline Lucas who sat down before her arrest on a protest as an act of 'extremism'.

He finished off by pointing that 'far left' socialist groups are also regarded as extremists who are monitored by the police. In effect he was equating socialist groups with Islamic State (ISIS) and the neo-fascists of the EDL. I could not believe my ears.

We were told that we have to become spies and pass on any concerns we may have over school kids who are espousing "extremist'' views to the assistant head with responsibility for safeguarding.

They will then pass the child's name on to the local Prevent liaison committee. The police officer's slogan was: "If it doesn't sound right pass it on''.

I interjected and told the Prevent officer the deeply authoritarian nature of what he was saying. I said I had been on strike a while ago and asked if that made me an extremist to be monitored by the police? He had no answer to my points or the questions I raised.

All Prevent will do is to alienate many young people. It will fail abysmally at stopping the radicalisation of ordinary people into various movements fighting austerity and defending the environment.

The workers' movement needs to expose and campaign against this repressive state body which will be used against us to try and suppress opposition to the Cameron government and its big business backers.

The menopause: breaking the taboo

Turkey: only workers' unity can end terrorism, division and war

Determined mood to defend the unions

Anti-austerity protests from Northumberland to the 'English Riviera'