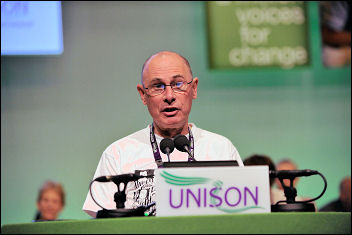 If you agree that Unison needs a fighting strategy to beat the cuts, we urge your branch to nominate Socialist Party member Roger Bannister. Nominations open on 2 September and close at 5pm on 9 October.

Roger is secretary of Unison’s Knowsley branch in Merseyside. He has been on Unison’s leading national executive committee since the union was formed. In that time Roger has consistently supported fighting policies to defend members, and opposed the leadership’s illegal attacks on activists.

He led a successful strike in Knowsley to defend the 35-hour week, and to extend it to other workers. He has won pay increases for many groups. He also serves on Unison’s industrial action committee, and the health and safety committee. Roger has a proud record of working with members of all unions and building solidarity with workers in dispute.

He can win! He has been the leading left challenger in previous general secretary elections, reliably outpolling others by a sizeable margin. And he is the only candidate who has pledged to take an average workers’ wage if elected.

Unison members face massive attacks on their jobs, pay and conditions of service. The Tory government is passing the burden of the bankers’ crisis onto ordinary working class people.

On top of that, the Tories are preparing to attack our democratic rights. They plan to massively curtail our right to strike against these injustices.

Unison needs a general secretary with a record of fighting for ordinary members. Roger Bannister is the candidate best prepared to lead an effective struggle against the Tory onslaught.