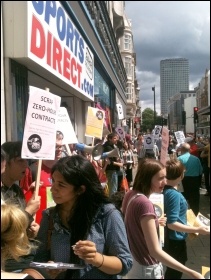 At the headquarters of infamous retailer Sports Direct, ambulances may have been called more than 80 times over two years.

According to the BBC, 36 calls were for life-threatening illnesses - including chest pains, breathing problems, convulsions and strokes.

Three of the calls to the warehouse in Derbyshire were for women having pregnancy difficulties. One even gave birth in toilets at the site.

Sports Direct is notorious for exploiting zero-hour agency workers - over 90% of the workforce has no guaranteed hours. Workers said many are "too scared" to take sick leave because they fear losing their jobs.

One agency that supplies staff for Sports Direct has a 'six-strike' policy. Offences include: any "period of reported sickness", "excessive chatting", and "excessive or long toilet breaks".

The agency also states assignments can be ended "at any time without reason, notice or liability".

Mike Ashley, owner of Sports Direct, is among the ten richest people in Britain, according to Forbes magazine. He has an estimated wealth of £3.5 billion. Yet he refuses to pay for the most basic decent working conditions for the workers who make him his millions.

The Socialist Party campaigns to put an end to exploitative, Dickensian working conditions. We demand an end to zero-hour contracts. All workers, including agency staff, must have trade union rates of pay, full employment protection, and sickness and holiday rights from day one of employment.