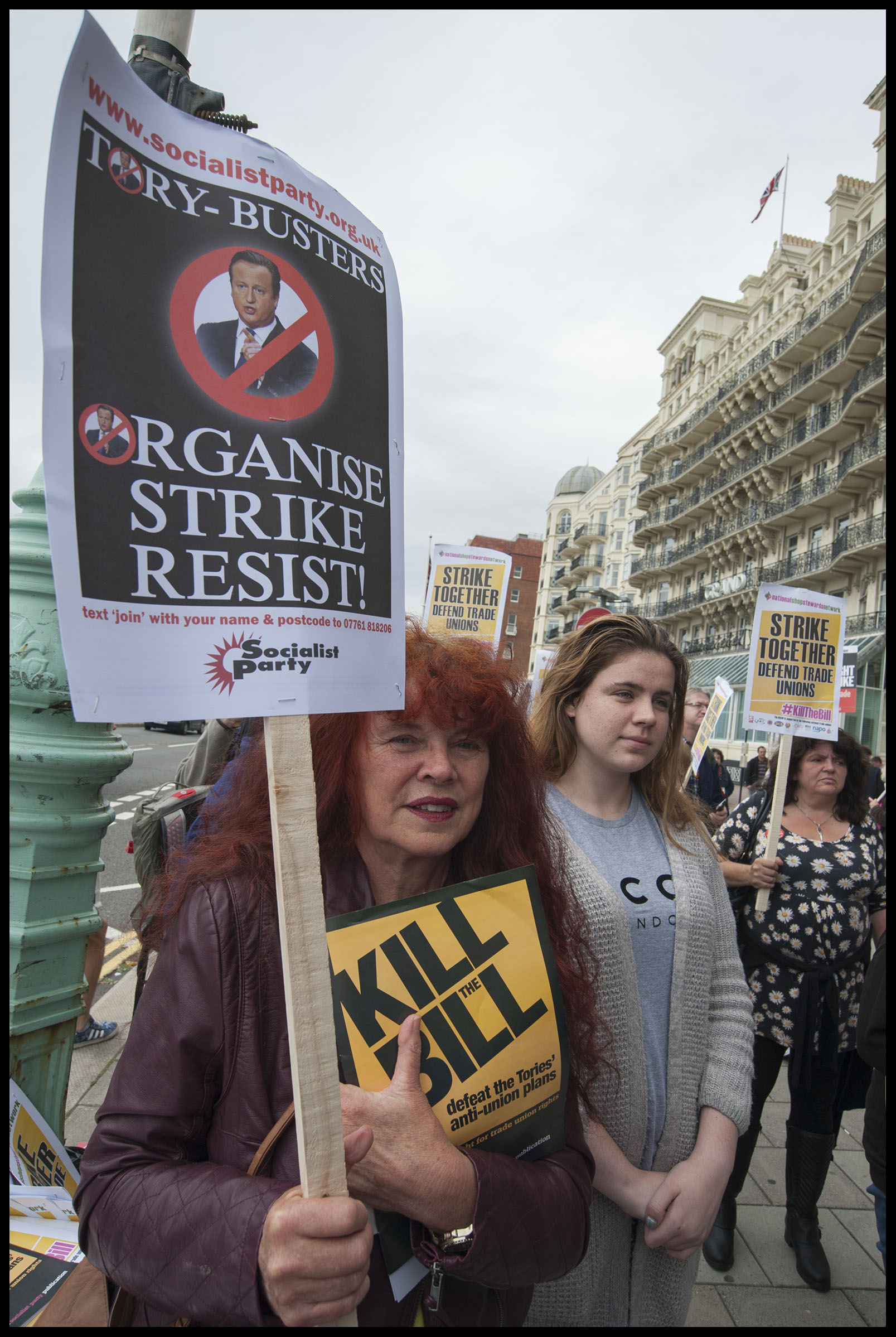 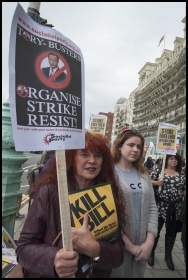 Demonstrate outside Parliament on 2 November and strike together to…

The TUC lobby of Parliament on 2 November needs to mark a major change in the fight against the Tory anti-trade union bill. Its third and final reading is on 10 November. That date must be in the diary of every trade union member for a mass demonstration in London.

The National Shop Stewards Network (NSSN) has been to the forefront of the ‘Kill the Bill’ campaign. We brought hundreds of union activists and reps to lobby Trade Union Congress (TUC) in Brighton in September. That conference passed resolutions calling for a mass campaign against the bill and co-ordinated industrial action if it becomes law.

In particular, the RMT motion called for ‘generalised’ strike action. That demand must be the banner of this struggle and the whole membership of the trade union movement must be mobilised behind it.

The response of the TUC and many of the unions has been totally insufficient to a bill that could be law in a matter of weeks. The full implications of it must be explained to union members, their friends, families and their communities. It has been presented at the same time as another brutal Tory cuts offensive precisely because Cameron and Osborne know full well that it is the union movement, with over six million members, that has the potential power to be the biggest barrier to their austerity agenda. A mass demonstration on 16 November followed by strike action would see the realisation of this power and defeat this bill.

This trade union bill is the biggest attack on union rights since Thatcher’s anti-union laws three decades ago. A fat cat government that was elected by a mere 24% of the electorate wants to impose voting thresholds on unions, thresholds that if applied to elections would mean hardly a councillor would be elected anywhere in the country!

Under the Tories, it’s always one law for the rich and another for the rest – tax cuts for them, vicious cuts for us. Now it’s one set of voting rules for the unions that don’t apply to the politicians!

But that is only the start. This bill enshrines attacks on union facility-time, doubles strike notice period, puts time limits on disputes, legalises scabbing and opens the door to the arrest of peaceful pickets.

The removal of check-off – the deduction of union membership subs from wages – is also part of the package in an attempt to bankrupt the unions. But the PCS civil servants’ union, singled out by the Tories before the general election, has already shown that if the unions are prepared to take on this challenge with a fighting programme, it can be won. They have faced down the Tory attack by signing up 90% of members to direct debit this year!

The unions have to take a fighting stance against the bill. This isn’t an all-powerful government. They sneaked in to power but now want to push on with their cuts and anti-union plans. But they have already been met with growing opposition. The London tube strike over the summer shut the capital down, showing again the power of the organised working class. The victory of the PCS National Gallery workers after a heroic struggle of over 100 days of strike action has been an inspiration. Now the junior doctors have burst onto the streets and are balloting for strike action against Jeremy Hunt’s new contract and students are also again on the march.

Jeremy Corbyn was victorious in the Labour Party leadership contest because he rode a mass anti-austerity wave which was reflected in huge anti-austerity demonstrations in London in June and in Manchester in October outside the Tory Party conference.

The defeat of the Tories’ tax credits cuts was in reality because of the fear about the anger of low-paid workers. What would a mass movement led by the unions achieve?

This shows that if the unions take decisive action against the trade union bill and link it to the cuts, they could lead a mass movement against the Tories.

If the streets of Westminster were full on 10 November, warning Cameron that there would be a 24-hour general strike if the bill was passed, the Tories could be forced to back down. That is the message that needs to be taken back from the 2 November lobby.

Come back to London on 10 November for a mass demonstration to defeat the bill and also prepare for mass strike action if it’s passed.

Trade unionists and anti-cuts campaigners came together in Southampton to hear Rob Williams, chair of the NSSN, outline the implications of the Tories’ new anti-trade union legislation.

Also Declan Clune, Unison steward (personal capacity), outlined the problems facing workers in the public sector suffering the impact of cuts and the important role of the NSSN in bringing together activists in the trade unions and the community to build joint campaigns and solidarity action.

Rob emphasised that “this is a weak government facing a potential mass movement of trade unions with the power to resist further cuts.” The meeting agreed to organise transport from the local area for the TUC lobby on 2 November and continue building wider support for the anti-austerity movement and the work of the NSSN.

Organising to Kill the Bill, public NSSN meetings in the North West: