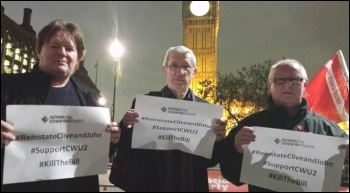 As reported in the Socialist last week, a longstanding Socialist Party member in the Communication Workers’ Union (CWU) has had an appeal against unfair dismissal rejected by British Telecom, confirming his sacking after 38 years of service.

The member, Clive, is chair of the CWU Birmingham, Black Country & Worcester branch and is a leading lay rep of the union.

Clive has said: “I would like to thank all Socialist Party and National Shop Stewards Network (NSSN) supporters for the solidarity shown to me so far in my campaign for re-instatement. The number of likes on Facebook and the number of tweets has been amazing; many from people and organisations I don’t follow and have never met. Hopefully BT now know that they are taking on an industrial and political movement and not an individual.

“Having support from union general secretaries, presidents, vice-presidents and executive members is both heartening and shows how seriously sacking a trade unionist is taken. I was particularly encouraged that my union general secretary Dave Ward re-tweeted the NSSN demanding the re-instatement of myself and John Vasey, the victimised CWU rep from Wakefield.”

Clive worked in a BT call centre and was dismissed after an aggressive customer reported him to management just 33 seconds into a phone call. The decision was made without taking stress into account despite the local CWU branch reporting that 7% of staff at the call centre leave their jobs each month, some walking out mid shift. Management took the decision without consulting any medical advice or taking into account any mitigation.

An employment tribunal claim for unfair dismissal is currently pending. Clive is an NSSN steering committee member and the NSSN and Socialist Party will be supporting the campaign protesting the sacking and calling for his reinstatement.

Also John Vasey, a CWU postal rep in Wakefield, West Yorkshire, has been sacked on what his work colleagues recognise as stitched up charges. John is waiting for his appeal at the end of November.

The NSSN calls on all our supporters and affiliates to support John’s campaign for reinstatement and his union the CWU.