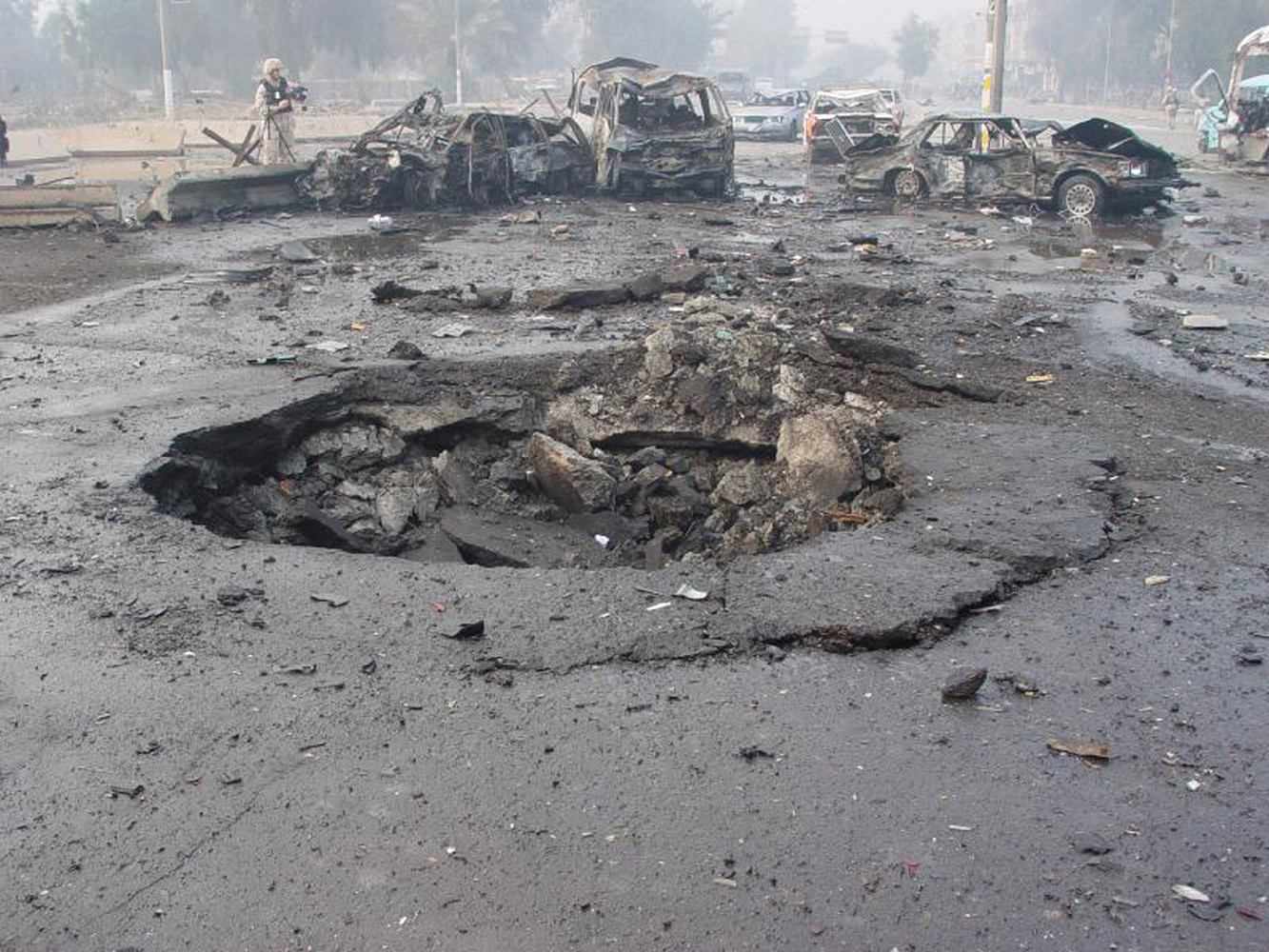 For workers’ unity against war, terrorism and racism 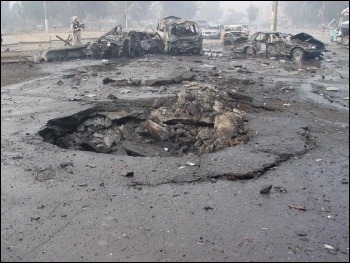 The civil war within the Labour party has reached fever pitch. In the last week, Blairite MPs and right-wing shadow cabinet members openly joined forces with the Tories, attempting to imprison Jeremy Corbyn and secure a parliamentary vote in favour of war in Syria.

The crisis has removed any remaining veil of ‘unity’ that had cloaked the reality: Labour is essentially two parties in one. There is, on the one hand, the Corbyn-supporting Labour Party. The hundreds of thousands who were enthused by the clear anti-austerity and anti-war message of his leadership campaign. The 75% of members who oppose bombing Syria. The people who delivered Jeremy his historically large mandate in September.

On the other, there are the majority of pro-austerity right-wing Labour councillors, MPs and shadow cabinet members. And between these two irreconcilably opposed political positions, peaceful co-existence is impossible.

This contradiction at the centre of the Labour Party will be made most abundantly clear when, on 2 December (after we go to press), the leader of the opposition and the shadow foreign secretary speak in the House of Commons to put forward diametrically opposed views. While Jeremy Corbyn will advance a case against bombing, Hillary Benn will back the Tories’ march to war.

In the view of the Socialist Party, it was a serious mistake for Jeremy Corbyn to grant the concession of allowing Labour MPs a ‘free’ vote on the question of bombing Syria. Clearly he is hoping this move will stave off an all-out war with the Blairites – who had threatened resignations if he attempted to make them vote against war, even though a majority of Labour MPs indicated they were against the war.

But the truth is that this climbdown will embolden both the Tories and the Labour right. Had Labour taken a clear stand in opposing this latest round of imperialist intervention in the Middle East, the government could well have been forced to retreat. 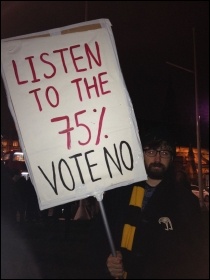 Instead, Cameron is now pressing ahead with the vote in Parliament, feeling confident that he will get backing of enough Labour MPs to vote for bombing.

The disastrous legacy of recent British interventions – in Iraq, Libya and Afghanistan – has helped to sow the seeds of the deadly chaos that currently engulfs Syria and its people – including the horror of Isis.

This has made Cameron more anxious to have the political cover of a vote in Parliament, including the support of Labour MPs, before embarking on this latest war. Chastened by losing the vote on bombing Assad in 2013, he has been cautious to make sure the ‘parliamentary sums add up’ before pressing ahead.

As the Socialist Party argued in last week’s issue of this paper, bombing Syria will not stop Isis. Cameron is attempting to use the grief and outrage felt by ordinary people at recent terrorist atrocities – including in Paris, Mali, Beirut, Tunisia and Ankara – to try to build public support for this war.

But his real motivation is not to make Britain’s streets safer. In reality, extending British air strikes from Iraq to Syria risks increasing the chances of new terrorist attacks on our shores.

Instead, it is maintaining Britain’s prestige as an imperialist power which is a main motivator for this latest push, with the government determined not to be ‘left behind’ as the US, France and Russia continue their bombing campaign. This instinct is shared by the Labour right.

After all, many of the MPs and shadow cabinet members currently scheming against Corbyn were among the architects and supporters of Blair’s bloody wars in Iraq and Afghanistan. They are biding their time before attempting to unseat Corbyn, and will feel that they have scored a victory this week.

By allowing himself to be ‘hemmed in’ on Syria, a dangerous precedent for future battles on other key issues has been set. In September, Jeremy Corbyn won an enormous mandate on the basis of a leadership campaign which put forward a clear anti-war and anti-cuts stance.

But now he finds himself perched atop an overwhelmingly hostile, right-wing parliamentary Labour party, whose aim is to remove him as soon as they feel the timing is right.

As the battle over Syria has raged, these malign intentions have been made absolutely clear. It was revealed in the papers over the weekend before the vote that some Labour back-benchers were seeking legal advice over the possibility of excluding Jeremy Corbyn from the ballot paper if a new leadership election was triggered by MPs. 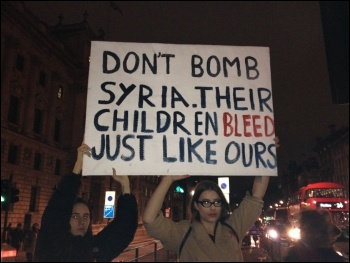 Meanwhile, shadow cabinet members including Tom Watson and Hilary Benn openly broke ranks by publicly declaring their support for the bombing, even before internal discussions on the question had reached a conclusion.

At the same time, a plethora of shadow cabinet members and Labour MPs – some named, but most anonymous – have lined up to attack Jeremy Corbyn in the press, detailing his various heinous crimes such as ‘writing to Labour MPs stating his anti-war position’. Indeed, despite Corbyn supposedly striking a deal with deputy leader Tom Watson – whereby official ‘party policy’ would be to oppose the bombing while MPs would not be ‘whipped’ – as soon as Corbyn signalled that he was in retreat, the Blairites smelt blood.

At the subsequent shadow cabinet meeting on 30 November they forced him to step back even from this uncomfortable compromise. It is reported that shadow cabinet members refused to leave the room until Jeremy Corbyn agreed that Hilary Benn would be allowed to sum up Labour’s contribution to the discussion in parliament from the despatch box – supporting the government’s position.

Without a serious strategy to overcome the isolation faced by Jeremy Corbyn and his few allies in the parliamentary Labour party, he could rapidly become completely paralysed as leader and ultimately be removed. This episode has emphasised that it is now of even greater urgency that Corbyn’s supporters are organised with a clear strategy and programme. 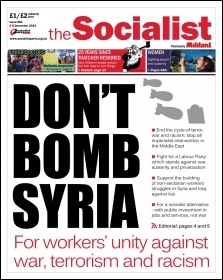 A glimpse of what is possible was shown over the weekend before the vote. Tens of thousands of people responded to calls to write to and, in some cases, lobby Labour MPs to vote against the war.

Over 70,000 people also responded to a survey sent out to Labour party members and supporters – with three quarters declaring their opposition to the bombing. But letter writing campaigns and surveys are not enough.

An almighty struggle is required in order to defeat the Labour right. This means mobilising the hundreds of thousands of working class and young people who back Corbyn, drawing on the strength of the organised workers’ movement in the trade unions and bringing in existing anti-austerity campaigns and parties.

The setting up of Momentum was a step in the right direction. But so-far, on a national level this organisation has mainly restricted itself to things like calling for voter registration campaigns and organising for people to assist with canvassing in support of the right-wing Labour candidate standing in the Oldham by-election.

Instead Momentum nationally should adopt the kind of approach taken at local level by some of its groups. A good example is Lewisham Momentum, which has taken a clear anti-cuts stand and is campaigning for Labour councillors to protect local services rather than passing on Tory austerity.

At an anti-austerity conference in London on 21 November Matt Wrack, general secretary of the firefighters’ union FBU, and Mark Serwotka, general secretary of civil servants’ union PCS, called for the setting up of a Trade Union Momentum. This could potentially play a very important role. 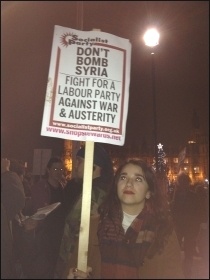 This week at a special conference, the FBU also voted to re-affiliate to Labour. The Socialist Party has cautioned against this – as affiliation means handing money to the right wing Labour machine, not Corbyn and his supporters.

But what is clear is that, whether affiliated or not, the trade unions must now use their weight to put pressure on Labour councillors and MPs to act in the interests of working class people.

This fight must not be limited to the current, undemocratic Labour Party structures. At an absolute minimum, this means opposing imperialist wars and interventions and refusing to continue to implement brutal austerity measures.

In the Socialist Party’s view it was a mistake for Jeremy Corbyn to state that he opposed the mandatory re-selection of MPs. In fact, it is absolutely crucial that Labour MPs or councillors who use their positions to vote for this war – not to mention the destruction of jobs and services through cuts – should be held democratically accountable via a reselection process.

As the Blairites sharpen their knives against Corbyn, it is vital that we are organised to defend him and to fight for there to be no further retreat from the key pledges that saw him elected. The Socialist Party is helping to organise this struggle and to fight for the socialist programme that is needed in order to put an end to war and austerity.