The editorial of the Socialist 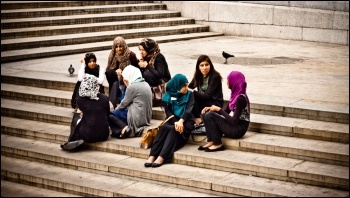 Increasingly the government's 'Prevent' strategy is facing protest. Over 280 academics have condemned it. A House of Commons committee report stated that "Prevent risks undermining positive cross-cultural work on cohesion and capacity building".

Originally trialled in 2006 by Labour, the Tories launched their Prevent strategy in 2011. Last year it became a legal duty. The Counter Terrorism and Security Act 2015 requires staff in public services - schools, colleges, prisons, GP surgeries etc - to report on anything that might suggest someone is vulnerable to 'extremism'. This can mean the involvement of social services and the police, and being put into the process of 'de-radicalisation'. Not to report a suspicion is potentially a criminal offence.

According to figures from Prevent Watch, referrals increased by 500% in 2015.

Occasionally a story makes the headlines and illustrates the reality of Prevent, such as the 14-year old questioned for talking about eco-terrorism. But there are lots of stories: Such as the secondary student questioned by social services for watching programmes about world war two on a Middle-Eastern TV channel. Or the child reported to the police for refusing to shop at Marks and Spencers.

Waltham Forest Council of Mosques, representing up to 70,000 Muslims, has vowed to boycott the programme. Muslim leaders in Newham claim the Prevent strategy is causing a "breakdown of trust" and "spying on our young people".

Prevent even faces opposition from some in the police. A former senior Muslim police officer, Dal Babu, argues that the policy has become a "toxic brand" for the organisations it has helped fund, so that Muslim activists working in their communities are now tainted.

In Waltham Forest the 'Brit' project, 'Building Resilience through Integration and Trust', is being trialled in five primary schools with a large Muslim intake. Children as young as nine have been expected to complete surveys designed to provide clues to possible radicalisation. The questionnaire asked how much they trust the police and people from another race or religion.

They were asked whether they agree that it is acceptable to marry someone from outside their race or religion and whether women are just as good as men at work. Another question asked "If a student was making fun of my race or religion I would try to make them stop even if it meant hurting them."

'Prevent' involves outrageous - and hypocritical - stereotyping which can only serve to increase mistrust of Muslims and division in schools and wider communities. For example, the Tory secretary of state for education, Nicky Morgan, who voted against gay marriage, cited hostility to homosexuality as an example of a sign of susceptibility to extremism.

The National Union of Teachers reports that Prevent is causing significant nervousness and confusion among teachers. Teachers already have a duty of care to safeguard all children. Students and teachers need to develop a relationship of trust - much more likely to lead to a result if there is a problem - but this will erode that and make young people less likely to talk for fear of being reported to the police.

A study by the Claystone think tank, 'Building distrust: Religious profiling in primary schools', considers that Prevent "clearly points to a pattern of ethnic profiling in counter-radicalisation policy in British schools".

The Tories have stepped up anti-migrant and anti-Muslim rhetoric with so-called 'anti-extremism' measures. The Prevent strategy is part of this, alongside the teaching of 'British values' in schools. David Cameron said "If you walk our streets, learn in our schools, benefit from our society - you sign up to our values".

The latest example is David Cameron's suggestion that Muslim women in the UK who do not speak English are at risk of radicalisation and could face deportation if they do not learn English. He proposed a £20million fund - not mentioning the £45million that used to be spent annually on English for Speakers of Other Languages (Esol) until that was cut last August. 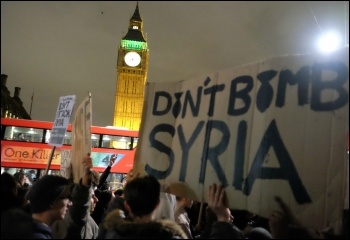 The Socialist Party, along with the vast majority of Muslims, condemns terrorism and we understand that many people are fearful of the possibility of another terrorist attack in Britain. We completely oppose the ideas and methods of Isis, a brutal right-wing organisation. In fact around the world the majority of victims of terrorism are Muslim. Only a very tiny number of Muslims are attracted to the ideas of Isis.

But a government of the rich, elected by just 24% of the electorate, split over the EU and beset by crises in the economy and the Middle East, with a refugee crisis on its doorstep, all of which it has no solution for, is attempting to scapegoat Muslims and whip up fears and division among working class people.

They want us all to look away and blame each other, while the rich get richer and we face unprecedented austerity. They want to reduce our ability to unite and fight back.

At the same time they hope to be seen to be 'doing something' in response to fears of terrorist attack.

However, the bald fact is that no amount of anti-terror legislation has made or will make the threat of attack go away. New anti-terrorism laws were introduced in 2000 which did not stop the terror attacks of 7/7 in 2005.

The risk of terrorist attack in London has been increased by the bombing of Syria.

It is the foreign policy of the British and other western governments and their global allies - years of subjugation, wars, invasion and occupation in the Middle East, the terrible treatment of Palestinians by the Israeli state, backed by the US - that has created the conditions for terrorism.

The so-called "war on terror" waged by western imperialists powers for the last 15 years has brought terror to Iraq, Libya, Syria, Paris, Tunisia, London - and many more places.

These interventions have created a daily nightmare. But when people try to escape, they are left to drown in the sea or languish in squalid camps while the same western governments turn their backs.

Young people see all this, and experience the racist response of the government, while their own future is torn away by austerity cuts, fees, privatisation, low pay, zero-hour contracts and extortionate rents. Young Asian people in particular face more poverty. 20% of white families live in low-income households - an appalling statistic itself - but that rises to 60% of Pakistanis and 70% of Bangladeshis.

The Socialist Party completely opposes racism and all division. But we think it is important not to respond to vital issues such as refugees and Prevent as stand-alone issues, separate from austerity and attacks on the working class generally, which is unfortunately the approach of some, such as the Socialist Workers' Party, in campaigns like Stand Up to Racism.

We have to vigorously fight for class demands and campaign action that is capable of uniting all sections of the working class.

Terrorism cannot be eliminated by capitalist governments as they create the conditions in the first place. For the working class and poor all capitalism offers is poverty and austerity.

The only way to rid our world of the threat of terror attacks is to eradicate the conditions that breed them: poverty, war, oppression and exploitation. Unity of working class people in mass movements is essential.

In Hull the police interviewed young people who organised an anti-austerity protest in June last year. The teaching of 'British values' has been used to warn school students against protesting at MPs who voted to bomb Syria.

The Tories' anti-extremism laws come alongside attacks such as the Trade Union Bill, a draconian attack on workers' rights that aims to shackle the ability of working class people to fight to defend their jobs, pay and services.

Jeremy Corbyn winning the leadership of the Labour Party means that an expression of anger against racism, anti-democratic policies and imperialist wars are at least aired in the mainstream media.

It is essential that these correct ideas are married with a clear programme that fights for homes and jobs for all, to harness all anti-austerity and working class forces in a battle to defeat Tory austerity and the division and racism they create.