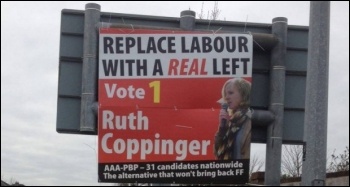 Three members of the Socialist Party (Irish sister party of the Socialist Party in England and Wales) have been elected to the Irish Parliament as part of the Anti-Austerity Alliance. The elections, which took place on 26 February, saw the decimation of the vote for Fine Gael and the Labour Party which had been in a coalition government implementing ruthless austerity since 2011. Ruth Coppinger, who was re-elected in Dublin West, spoke to the Socialist on 29 February.

What do the results show, particularly about the previous government parties?

The results of the election overall showed a continuation of the rejection of the 'two-and-a-half' party system that we've had in Ireland for many decades. The two big parties of capitalism - Fine Gael and Fianna Fail - between them don't have 50% of the vote.

In the past Fianna Fail on its own would have had 40% of the vote, now it's down to below 25%. Similarly Fine Gael suffered the loss of some of its former ministers in the election because there was a huge reaction against the idea of their slogans "keep the recovery going" and "stability vs chaos".

People didn't feel the recovery to the extent that Fine Gael and Labour had estimated.

They also didn't buy the idea of stability vs chaos. We've had chaos in terms of a massive housing crisis raging in our cities in particular and especiallyin Dublin. There's been a continuation of the water charges, property tax and other austerity taxes introduced during the banking bailout.

We've also had an erosion of our public services - health, education. For example, the health services had about €4 billion taken out of it since the bailout of the banks and bold-holders began in 2008.

A clear feature of the election was a further decimation of the Labour Party - punished severely for its role in an austerity government.

The reason there was such anger against Labour was particularly because of the issue of the water charges. The policy of Labour in its last election campaign was that it opposed water charges but then when it went into government it implemented them.

In Dublin West I polled ahead of the leader of the Labour Party, Joan Burton. She was in danger of losing her seat but narrowly scraped the last seat in the constituency.

Currently, Labour has six members of parliament. There are some counts still not complete because they're very tight, they may emerge with seven.

Coincidentally, the left block that the Anti-Austerity Alliance (AAA) formed for the election with another left group, People Before Profit (PBP), also has six at the moment.

And one count is still ongoing which a PBP candidate has a chance in. Seven seats gives you an entitlement in the Parliament to be a parliamentary group of your own, with your own speaking rights and the ability to do leaders questions every day and put more bills, etc.

It's not ruled out that we'll get the seven but either way we'll have doubled our representation and be similar to the Labour Party's representation.

And what is the situation with Sinn Fein?

Sinn Fein was poised to do much better in the elections than they did in the end - at one point they were on 20% of the vote and they emerged with less than 14%.

Throughout the campaign Sinn Fein put forward what you could call an 'austerity-critical' stance. They said many of the same things we would, that they would abolish the water charges, the property tax, invest in public services etc.

But what Sinn Fein was proposing throughout the campaign was extremely minimal. They called for 50 cent increase in the minimum wage - that's extremely minimal. A lot of the stuff that they had in their housing budget wouldn't deal with the housing crisis. In contrast, the slogan that AAA had on our posters was "real change not spare change".

Fine Gael, Fianna Fail, Labour and, unfortunately Sinn Fein, all accepted the idea of the 'fiscal space' - a small amount of money that would be available for public services which may be between €8 billion and €10 billion in the next couple of years. We completely challenged that idea, pointing to the huge wealth that exists in society.

We agreed with the principles of this, but we were being asked to give a commitment in advance to form a 'progressive' government after the election with Sinn Fein and a range of other groups.

We weren't willing to do that. So what we asked Sinn Fein to do at the beginning of the election was to exclude the possibility of any coalition with parties of the right like Fianna Fail and Labour.

Sinn Fein wouldn't give that commitment to do that. They maintained the position that if they were the largest party, they would be open to going into a coalition with Fianna Fail or Labour, but that they wouldn't prop up such a party.

What's likely to happen now in terms of a government being formed?

Well it's still early days because there are some seats still to be filled.

There's pressure on Fianna Fail and Fine Gael to form a coalition, which would be unprecedented. It would be the two parties of capitalism having to join together, which is actually a sign of weakness because the system and the establishment would prefer to have two teams.

So they're very reluctant to do that. They want to maintain the illusion that there's some major difference between them and they would fear the growth of the left in that scenario.

They may end up having to do that, or they may seek to have some arrangement with either the large group of independents or the Labour Party, all of that remains to be seen.

How did AAA do across the country?

Overall it was a very good result. AAA stood 13 candidates and PBP stood 18 - so between our combined platform we had 31. In many cases they were first time candidates in places we'd never stood before and it was a case of flying the flag and being seen to provide a bigger alternative.

As well as retaining my seat in Dublin West and Paul Murphy's in Dublin South West, the AAA has won a seat in Cork with Mick Barry. So we've broken out of the capital which is important.

And the AAA in Limerick had an excellent and very successful campaign for Cian Prendiville, polling a couple of hundred votes short of Labour. We'll definitely be poised to have a left seat there in the future.

We also had results of 2,000 or over in three or four areas which is considered very good.

There's a huge yearning for change, but that's not been fully reflected in the elections. We need a new party, a real left party, to replace Labour.

The process of building that will involve more people becoming involved in political activity and that's something we have to convince people of - not just passively voting but taking part in campaigns.

What were the main issues for AAA?

The issue that the AAA would be most headlining on would be the water charges.

We have played a leading role in this movement and bringing it into the Dail, particularly with winning two by-elections (of myself and Paul Murphy) on the basis of this issue at the beginning of the water charges battle.

Potentially any new government that comes in could be forced in the direction of abolishing the water charges because all of the parties, except for Fine Gael, have been forced to take the position that they would abolish Irish Water, the company that was set up to administer the charges.

Either way, that's something that will be the top item for any new government coming in. If a new government doesn't abolish water charges I could see the re-emergence of protests to force them to do so.

We shaped and dominated the national debate on housing. In the last number of years the Irish state has completely cut back on council home building to such an extent that there's now 130,000 families on the housing waiting list. There's also been a huge growth in homelessness in Dublin and some other cities.

This has been a huge issue in Dublin West - 40% of the homeless population in Dublin hail from this constituency - so it was definitely something that AAA has been really associated with.

One other issue that we featured in the election was the campaign to repeal the 8th amendment (the constitutional ban on abortion). Interestingly it was definitely an issue in the election.

People were actually asking our opinion on it, probably for the first time. AAA has given a commitment to bring the issue into the Dail [Irish Parliament], with the idea of raising another bill calling for a referendum on the issue.

The agenda of the campaign from the establishment's point of view was extremely narrow throughout - just focussed on the four biggest parties tinkering with the system rather than any idea of transforming it.

We were the only force to point to the wealth that exists globally and how it takes its expression in Ireland where the top 1% have seen their wealth grow enormously during the recession. The richest 300 people have €84 billion between them, for example.

The country is generally used as a tax haven by the likes of Apple. At the beginning of the election it emerged that Apple owes €19 billion in back taxes to Ireland.

AAA pointed to this as an example of where we can find the resources to build the houses that we need, to replenish our health services, to reverse the austerity cuts, etc.