The bosses' EU is no friend of workers

"Dodgy Dave decided my vote. He votes stay, I vote leave." This tweet on the EU referendum sums up the attitude of growing numbers of people. It is one important reason that the majority of big business and billionaires - desperate to keep Britain in the EU - are beginning to seriously worry that a majority could vote to leave in June's referendum.

The Labour leader was so closely flanked by Blairite head of the Labour Remain campaign, Alan Johnson, that the latter seemed to be holding a metaphorical knife to Jeremy's ribs to make sure he didn't deviate from his script. A script which was delivered with no more enthusiasm than the average hostage forced before the camera to read out the view of his captors.

The Labour leadership, of course, are insisting that Jeremy Corbyn is now a keen supporter of remaining in the EU. But what caused his change of heart? During the Labour leadership contest, Corbyn said he had "mixed feelings" on the EU and refused to rule out campaigning to leave. At one GMB union hustings he stated: "I would advocate a No vote if we are going to get an imposition of free market policies across Europe."

For example, speaking against the Maastricht treaty in 1993 he stated: "It takes away from national parliaments the power to set economic policy and hands it over to an unelected set of bankers who will impose the economic policies of price stability, deflation and high unemployment throughout the European Community."

And more recently in 2009 he wrote that the EU had "always suffered a serious democratic deficit" and that "the project has always been to create a huge free-market Europe, with ever-limiting powers for national parliaments and an increasingly powerful common foreign and security policy."

What has changed since 2009? Nothing in the EU. It remains an Employers Union, dedicated to continent-wide privatisation and attacks on workers' rights.

Instead they faced a choice between defying the EU or capitulating and implementing even more austerity measures on a population whose average wage had already fallen by a third. Unfortunately, despite the preparedness of the Greek people to stand firm, the Syriza government bowed to the demands of the EU's institutions.

Jeremy Corbyn was absolutely right to say in his speech on the EU that, "socialists have understood from the earliest days of the labour movement that workers need to make common cause across national borders". International workers' solidarity against austerity is vital but Greece demonstrates conclusively that this will have to be in opposition to the bosses' club that is the EU.

Some of Jeremy Corbyn's most popular pledges when he stood as Labour leader - including renationalising the railways and energy companies - would be illegal under EU law. This does not mean a Jeremy Corbyn-led Labour government could not implement them - but in doing so it would come into confrontation with the EU. Far better to remove that obstacle by voting to leave in the referendum.

Back in September last year, just three days after telling David Cameron he would not give him a blank cheque on the EU referendum, Jeremy Corbyn signed a letter that did just that. Co-signed by foreign secretary Hilary Benn it promised to call for a yes vote regardless of the outcome of Cameron's negotiations with the EU.

This was the result of the right's first major attack on the new Labour leader with Pat McFadden, then shadow Europe minister, threatening to resign unless the letter about the referendum was signed.

Tory elder statesman Ken Clarke was right when he said that David Cameron could not survive "for 30 seconds" if he lost the referendum. Quite possibly neither could his government, particularly if Corbyn had been standing clearly for exit. 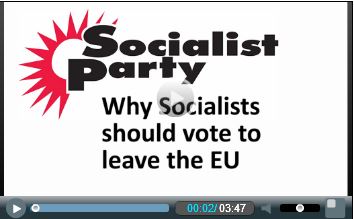 Sarah Wrack, editor of the Socialist, debates the EU referendum on BBC News with Momentum's Michael Chessum - watch on our Facebook page.

The Trade Unionist and Socialist Coalition's national election agent, Clive Heemskerk, is interviewed on RT News (13 April) about the Electoral Commission's decision to choose the Tory-dominated Vote Leave campaign as the official voice of exit in June's referendum. Watch on the TUSC website.