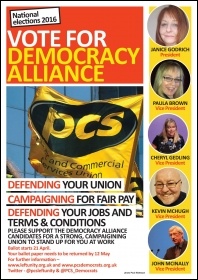 Elections for the national executive committee of the civil servants' union PCS start on 21 April.

PCS needs the Democracy Alliance's strong, campaigning leadership more than ever as the union faces unprecedented attacks on jobs, conditions and services from the government's ideologically-driven cuts and privatisation programme.

The government tried to destroy PCS through withdrawal of check-off (deduction of union subscriptions from wages). But this attack was defeated and PCS has emerged stronger, financially sound and more determined than ever.

Under the Democracy Alliance's leadership PCS will continue to be at the forefront of opposing the cuts by campaigning for an alternative.

Janice Godrich has said: "Life at work is difficult. While governments continue to attack our terms and conditions it is important to re-elect a leadership with a proven track record of organising a strong union."

Ballots will begin arriving 21 April and must be returned by 12 May. To see the full slate of candidates and for more see the PCS Left Unity website: www.leftunity.org.uk