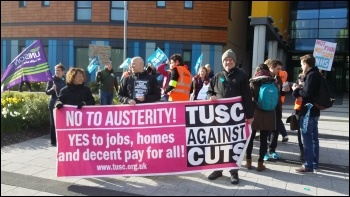 The Trade Unionist and Socialist Coalition (TUSC) is standing candidates for elections to the Scottish Parliament, the Welsh Assembly, and sixty English local councils on 5 May.

TUSC has been fielding candidates on a 100% anti-austerity platform since its formation in 2010, co-founded by the late general secretary of the RMT transport workers’ union, Bob Crow.

Obviously the political situation has changed since then, with Jeremy Corbyn’s election last autumn as Labour leader. TUSC has been clear that it would not stand candidates against Labour politicians who have resisted austerity.

But the big majority of Labour members of the Scottish Parliament, Welsh Assembly and local councillors did not support Jeremy Corbyn for leader and still continue to implement cuts to jobs and services. They cannot be surprised if they now face a challenge from a trade unionist and socialist anti-austerity candidate at the ballot box.

There are six Scottish TUSC candidates standing for constituency seats in the Scottish parliament. One is the branch secretary of Glasgow Unison, Brian Smith, who is standing in Glasgow Cathcart. For the Welsh Assembly elections TUSC is standing in three of the five regional list seats. In South West Wales the list is headed by former RMT national executive member Owen Herbert.

Lastly, TUSC is standing in two of the three Mayoral contests outside London taking place on 5 May, with Unison national executive member Roger Bannister standing in Liverpool and Socialist Party member Tom Baldwin in Bristol.

And other articles on our elections page: