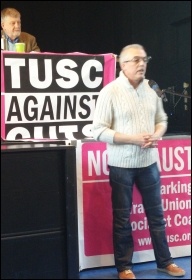 Councillor Kevin Bennett and the TUSC team have been out every day in Warrington discussing with Fairfield and Howley residents about the upcoming elections. We having been getting a tremendous response on the doors for Kevin and our other five candidates in the town.

Local people have been able to see the impact of a TUSC councillor over the last few days as fly tipping, a rising problem in the area, has been dealt with.

A growing town, Warrington residents are concerned that big developers are happy to build houses but pay no attention to the infrastructure people will need. Kevin calls for council house building and private developers to be held to account.

In reality, the Labour and Tory councillors have been complicit in letting developers run riot though the town while voting for huge cuts in the council chamber. Every 'lollipop' school crossing patrol has been cut.

Fracking is also a big local issue with ten fracking permits already a worry. Most of the other candidates said fracking was ok if it "could be proved safe". Kevin thinks Warrington should be a frack-free town. Labour has refused to sign up to this demand.

Rather than fracking, Kevin is a supporter of investing in green energy.

The local elections hustings saw the Labour Party outed for increasing expenses to senior councillors by £34,000 while also cutting the YMCA funding by £38,000. Our campaign has been clear - no to the gravy train and for action not words.

Three times in the hustings the Labour representative said there was "nothing they could do" because of the vicious Tory cuts to local government funding. How different our campaign has been!

In his closing remarks Kevin said it was time to take the fight to the Tories, not do their bidding in the council chambers.