Link to this page: https://www.socialistparty.org.uk/articles/22739

Come to the NSSN conference on 2 July 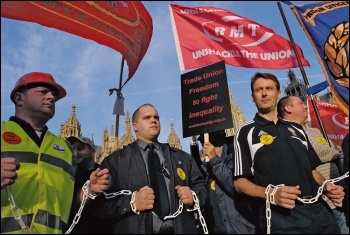 The Tory Trade Union Bill has completed its journey through the parliamentary process to become law.

Disgracefully, the Trade Union Congress (TUC) has not organised a single national demonstration against the bill. Its one lobby of Parliament last November saw hundreds of union members refused access to the venue in Westminster because the TUC had only booked half the seats, such was their pessimism about how many would turn up!

Fortunately, because the FBU had their fire engine outside, I was able to speak to what became an open-air rally. It was the only way the NSSN was going to get on a platform that day! I raised the necessity for the TUC and the unions to connect together the fight against Tory austerity with the fight against Cameron's anti-union plans.

This would show the whole union movement and the wider working class that the Tories recognise the potential power of the unions - still with over six million members - as the major barrier to their cuts, if they are mobilised in mass demonstrations and coordinated strike action. The heroic struggle of the junior doctors only emphasises how broad layers in society could be united in a movement against this weak, divided and damaged government.

Instead of such a mass campaign, the TUC's opposition has been reduced to lobbying the House of Lords. They celebrate the pruning of some aspects of the bill. But the utterly undemocratic voting thresholds (which, if applied to local elections would mean that hardly a councillor would have been elected) are still enshrined in it, as are measures to victimise lead pickets.

The NSSN calls for an emergency TUC congress to discuss how the Act can be resisted. This is what happened when previous Tory prime minister Heath brought in the Industrial Relations Act in 1971 and was subsequently defeated after a whole series of strikes. Such a congress, which should be opened to thousands of shop stewards and union reps, should be a 'council of war' that takes inspiration from the junior doctors, as well as teachers who are balloting for strikes against forced academies, and many others.

It's a disgrace that on the very day that marked the 90th anniversary of the 1926 general strike, the Tories have been able to bring in the most serious attack on unions for three decades with hardly a squeak from the TUC or most union leaders.

But the NSSN, along with thousands of union activists, will be fighting for mass action to defeat the Tories. This will be a major theme of the annual NSSN conference - our tenth - on 2 July. Join our fight.

This version of this article was first posted on the Socialist Party website on 6 May 2016 and may vary slightly from the version subsequently printed in The Socialist.