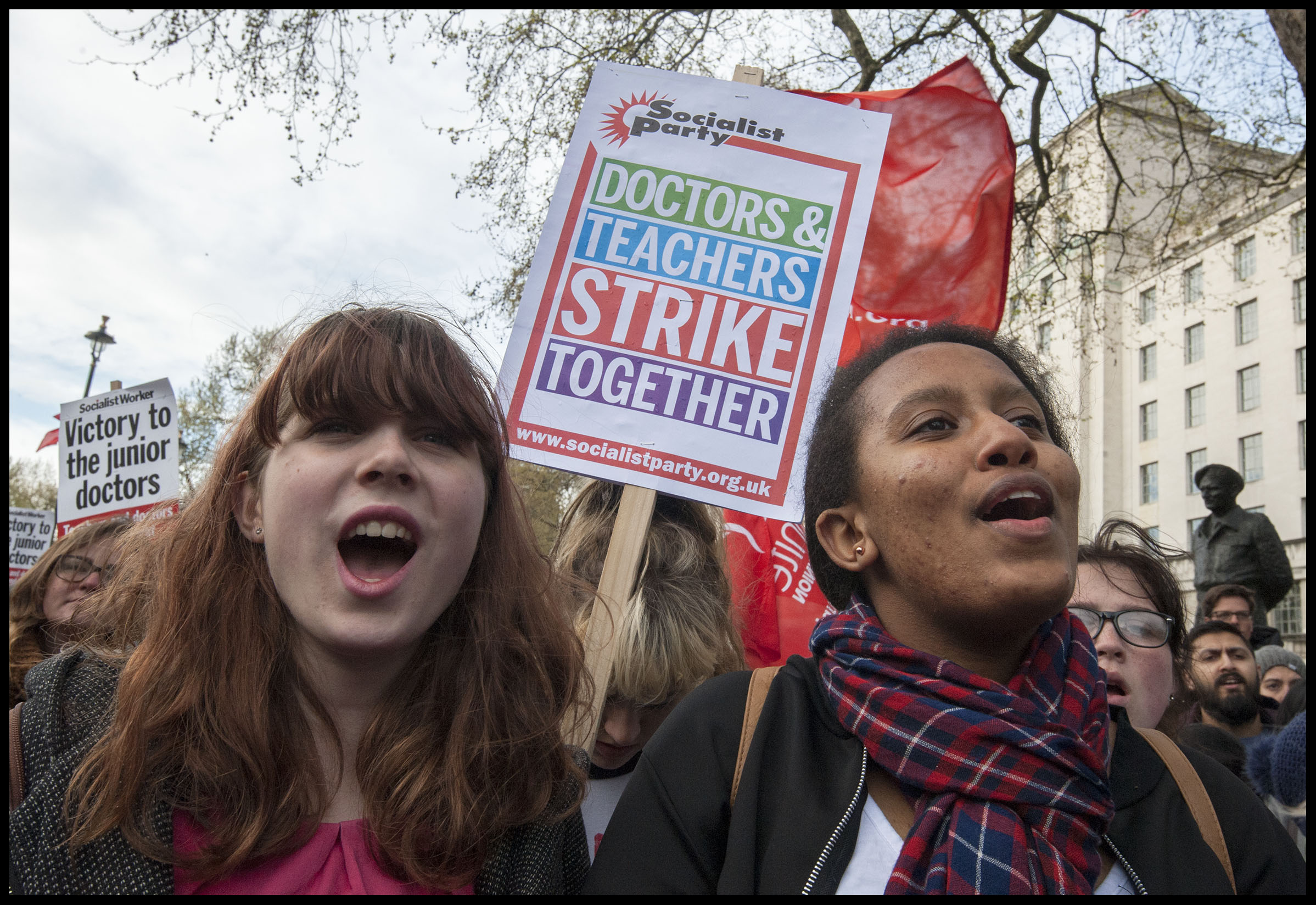 After the May elections:

Tories weak and divided – step up the fight against austerity! 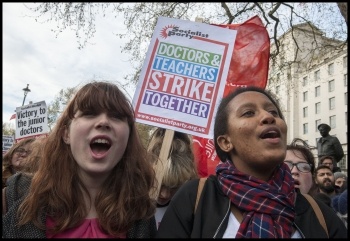 On the joint Junior doctors and teachers demonstration 26-4-16, photo by Paul Mattsson   (Click to enlarge: opens in new window)

The right-wing media had been claiming that this year’s elections would prove it was unpopular to oppose austerity.

The Blairites in the Labour Party have sung from the same hymn sheet – predicting that Labour would lose a huge number of seats, resulting in Corbyn being forced out.

One right-wing Labour MP even told Kevin Maguire of the Mirror that, “a defeat for Labour’s London Mayor hopeful Sadiq Khan was a price worth paying if it triggered Corbyn’s downfall”.

But to the disappointment of the Tories and pro-austerity Labour MPs the elections showed not the popularity of austerity, cuts and privatisation but the growing anger against them.

At the time of writing not all elections have been counted but it is clear that the Tories have been decisively defeated in the London Mayoral contest and that Labour’s vote has held up in the English council elections.

In the year since the general election this government for the super-rich has escalated its attacks on the rest of us. 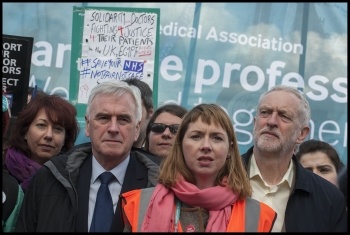 The myth that austerity was temporary and misery today would lead to plenty for all in the future has also been severely undermined. As a result increasing numbers of voters set out to express their anger at the polls.

However, there was no one party which voters used to protest against austerity. Instead anti-austerity anger was fragmented.

While many voted Labour others refused to do so because – while Jeremy Corbyn has correctly opposed austerity, saying it is a political choice – local Labour councillors and the Labour-led Welsh Assembly have passed on savage government cuts to local public services.

Right wing Labour councillors and Assembly Members that lost their seats will try and lay the blame at Corbyn’s door, but they did not stand on Corbyn’s policies, they stood on a pro-austerity programme.

That is why some voters showed their opposition by voting for what they saw as anti-cuts parties, whether that was Plaid Cymru in Wales, the SNP in Scotland, the Greens, the Trade Unionist and Socialist Coalition (TUSC), or even in a distorted way for UKIP.

Unfortunately, all of those parties with the exception of TUSC, have implemented cuts when in power at local or national level.

TUSC, in which the Socialist Party participates, was alone in standing 100% opposed to austerity and cuts in public services.

TUSC is a coalition of socialists, trade unionists and anti-cuts campaigners, including the transport workers’ union, the RMT, which stands in elections in order to oppose cuts and give workers a voice at the ballot box.

We wrote to Labour candidates before the elections urging them to take a clear anti-cuts stand and pledging not to stand against those that did so.

However, where Labour candidates voted for cuts – from library closures to bedroom tax evictions – we were prepared to stand against them.

The 58 Labour-led councils that had elections on Thursday hold over £4.5 billion in general reserves.

Pooling these would mean that no Labour council would have to make a single cut this year and could use the resulting breathing space to build a mass anti-austerity movement capable of defeating a weak and increasingly divided Tory government.

Split down the middle over Europe the Tories have been forced to retreat on a whole number of issues; including now on the academisation of schools.

A powerful united movement could bring a halt of austerity and force the Tories to call a general election.

Unfortunately, however, the majority of Labour MPs and councillors remain pro-capitalist and pro-austerity.

Labour is two parties in one: a pro-capitalist party and a potential workers’ party. Events of recent weeks show that no compromise is possible with the pro-capitalist wing – which is determined to get rid of Jeremy Corbyn as soon as possible.

The election results do not give them the excuse they hoped for to move quickly, but they will act as soon as they can.

To defeat the right means starting to mobilise the currently fragmented anti-austerity mood in a mass, democratic movement.

Instead it means building a movement – organised on federal lines – that brings together all of those workers, young people and community activists who have been inspired by Jeremy Corbyn and want to see a determined anti-capitalist party. The Socialist Party will do all we can to assist in the building of such a movement.