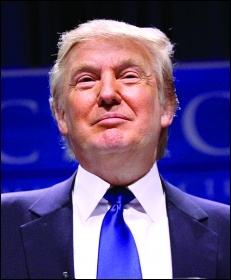 However, the Republican establishment fears a humiliating party defeat if Trump stands against Hillary Clinton, the Democratic front runner. It has, so far, failed to manoeuvre a supposedly more electable candidate.

However, this outcome is far from certain. Clinton, as the establishment candidate, could be beaten by the 'outsider' Trump, such is the public mistrust in her.

Some opinion polls conclude that Clinton's rival - 'democratic socialist' Bernie Sanders, with his message of 'a political revolution against the billionaire class' - would be better placed to defeat Trump and any other Republican candidate. This finding undermines the argument to back Clinton as 'the lesser evil'.

As Socialist Alternative (US co-thinkers of the Socialist Party) has continually explained, the rigged primaries and the use of 'super delegates' to ensure Clinton's succession will not mean the mass support for Sanders (as shown in the huge election rallies and in the 'open' primaries) automatically transferring to her Wall Street-backed campaign in the presidential election.