Link to this page: https://www.socialistparty.org.uk/articles/22994 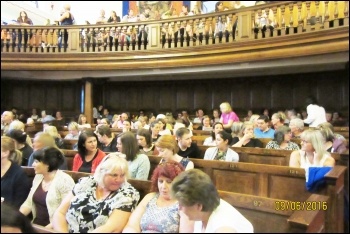 Around 400 angry teaching assistants (TAs) packed into a meeting called by Durham Trades Council. The meeting was called to support this group of workers whose terms and conditions are under attack by the Labour controlled Durham County Council.

The predominantly female TAs are furious at the council's controversial decision to sack 2,700 support staff then rehire them on worse pay, by only paying them during term time. This will leave many of these workers with up to a quarter of their wages slashed.

This group of dedicated workers are facing an uncertain future. In some cases where two members of the same household are TAs they face losing around £5,000 a year. It was reported that one woman has already sold her home because she feared it would be repossessed as she would no longer be able to keep up her mortgage payments. One woman told the audience that she has cried every single day since the decision was made. 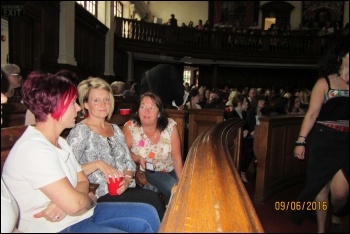 There was a groundswell of anger that a Labour dominated council was attacking workers that they believed it should be defending. One woman pointed out: "This isn't what the Labour Party is supposed to be about". The Labour council has dutifully agreed to cut services; and it is estimated that the attack on the TAs could save in the region of £3 million a year.

Calls for the Labour councillors to stop being managers for the Tories and instead to stand up and fight the cuts received enthusiastic applause.

There was also frustration at the lack of fightback from the union Unison, which has not yet balloted for industrial action. There was a feeling that Unison is in a cosy relationship with the Labour council and unwilling to put its members' interests before that of the Labour Party.

There was an understanding within the workforce that it was important to be in a trade union, but one woman in the audience asked: "Where are they tonight?" No union officers attended the meeting. Unison officials had instead tried to pressure the trades council to cancel the meeting.

The perceived inactivity of the unions Unison and GMB has led the TAs to organise their own campaign to defend their conditions.

The TAs can win this dispute if the level of anger and activity can be maintained. It is important that they orientate their campaign into their unions, particularly Unison, to democratise them and make the unions work for them.

The key demands of the TAs should include that the unions organise workplace meetings and recruit union stewards in every school, in order to ensure the workforce is fully informed and engaged, to win a vote for strike action.

Following the meeting many TAs are interacting with the National Shop Stewards Network (NSSN), which organises mutual solidarity across both private and public sector workers.

This version of this article was first posted on the Socialist Party website on 13 June 2016 and may vary slightly from the version subsequently printed in The Socialist.