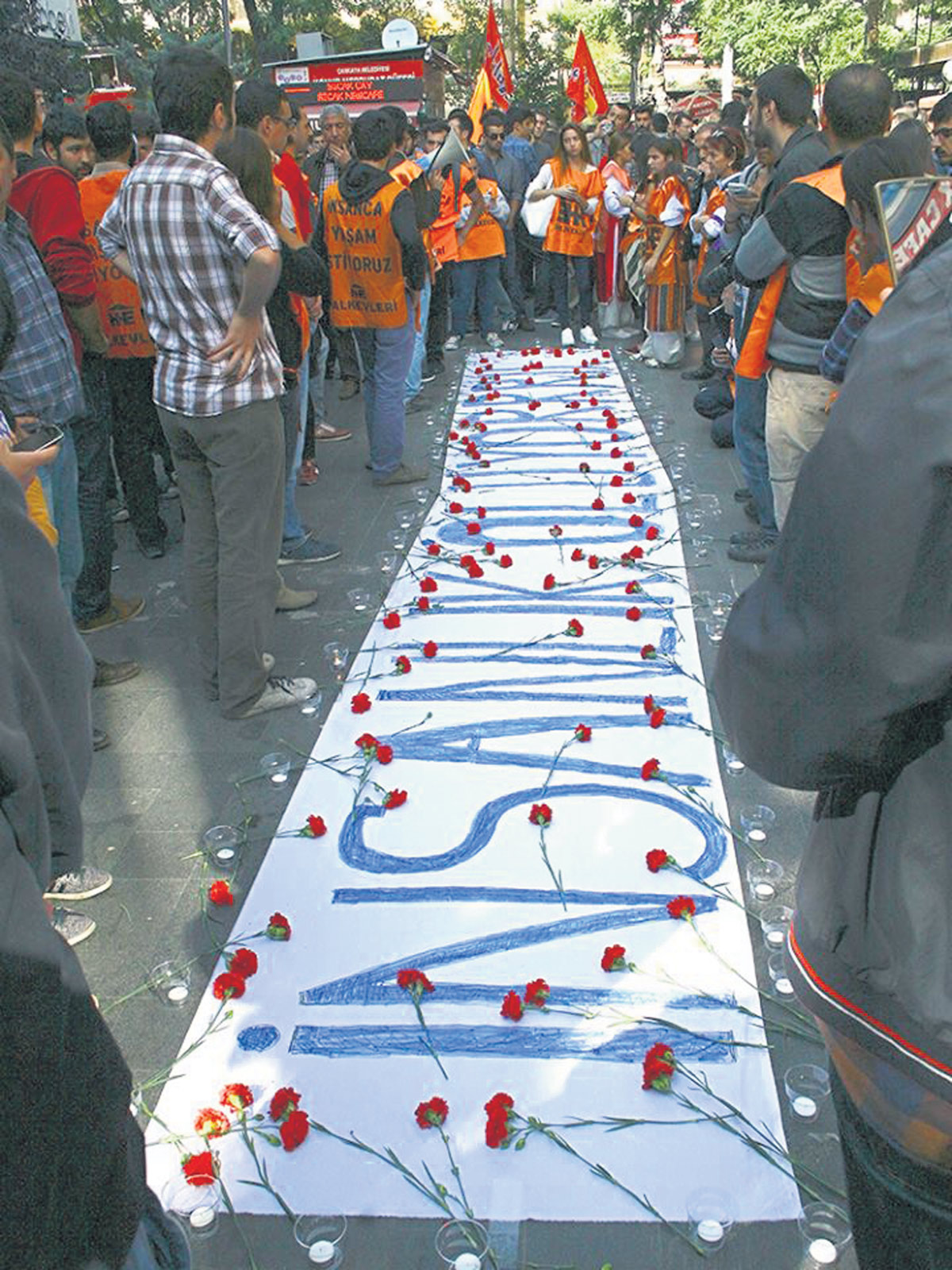 No to war and terror! Yes to workers’ unity and solidarity! 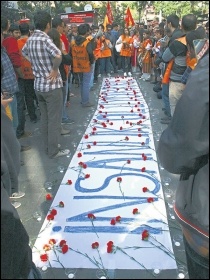 Trade unionists in Turkey express solidarity with victims of a terror attack in 2015, photo by Mike Cleverley   (Click to enlarge: opens in new window)

Three suicide bombers opened fire at passengers and security personnel before blowing themselves up at the security control at the airport building entrance.

The modus operandi and the time of the attack, taking place when Isis is facing important military setbacks in the region, suggests that the infamous jihadist organisation is seeking to display its continuing operational destructive capacity.

The Istanbul Atatürk Airport has relatively high security standards when compared with other European airports, and also has security checks at the entrance of the airport building. Yet these measures did not provide for a ‘security island’ or ‘terrorist-free zone’.

It shows the limits of an approach based exclusively on reinforcing an ever-increasing security apparatus while not dealing with the underlying causes of terrorism.

How to fight against terror has become a question of the utmost importance in a country shaken by ten terror bombings against civilians in the last eleven months, in which more than 250 civilians died.

Sosyalist Alternatif completely opposes terror attacks, whatever the ideology of the organisation carrying them out. Every one of the recent terrorist attacks has been used to clamp down on democratic rights and to reinforce the powers of President Erdogan and the state machine.

Following the attack, the government temporarily blocked social media, as it did after every such incident, and any investigative media reporting has been prevented or censored.

Importantly, we need to examine and fight the political atmosphere which has created the ground for such terror attacks. The AKP government in Turkey declared a day of national mourning after the Istanbul airport attack, but this is outright hypocrisy. Indeed, Isis attacking Turkish targets is like the dog biting the hand that fed it in the first place.

The AKP (Justice and Development Party) government supported supposedly ‘moderate’ armed opposition rebels in Syria for years. In practice, Turkey has become a ‘jihadist highway’ and a support area for Isis behind the frontlines.

Ironically, the Istanbul Atatürk Airport is an airport through which a considerable number of jihadist fighters and Isis foreign recruits have transited through in their journey to the so-called Isis Caliphate.

It is only recently that measures have been tightened to prevent this flow of jihadists, probably one of the reasons Isis has started to turn against the Turkish state. But it is overwhelmingly ordinary people who are paying the price for this cynical game.

In the last couple of years, radical Islamist terror groups developed a network of terror cells throughout Turkey. The instability caused by the Iraq and Syrian wars and the imperialist and regional powers’ supply of weaponry into these countries, increased accessibility to heavy and automatic guns and explosives all over the region.

The AKP government’s repression against political opponents, including against the pro-Kurdish People’s Democratic Party (HDP), along with the destruction of Kurdish cities and the massacre of civilians in the name of “military operations against the PKK”, nourished political instability and growing polarisation in society, creating a more fertile ground for terrorism.

The growth of terrorism in Turkey is in large part a blowback of the Turkish government’s policy. It is obvious that a government responsible for unleashing state terror cannot be trusted to address our security concerns.

To begin with, an independent investigation should be conducted into the 28 June events, engaging the trade unions and representatives of the workers of the airport, many of whom perished in the attack.

But more fundamentally, there is a need for radical political and economic change in Turkey, which will not come from above. The trade union movement, the HDP and the left need to come together and mobilise for a mass united struggle of workers and young people against terror, for social justice and political rights and against the state-sponsored military devastation which is taking place against the Kurds in south east Turkey.

Out of such a struggle an independent, socialist political alternative for the working class can be forged, linked to an agenda of socialist transformation across the Middle East.