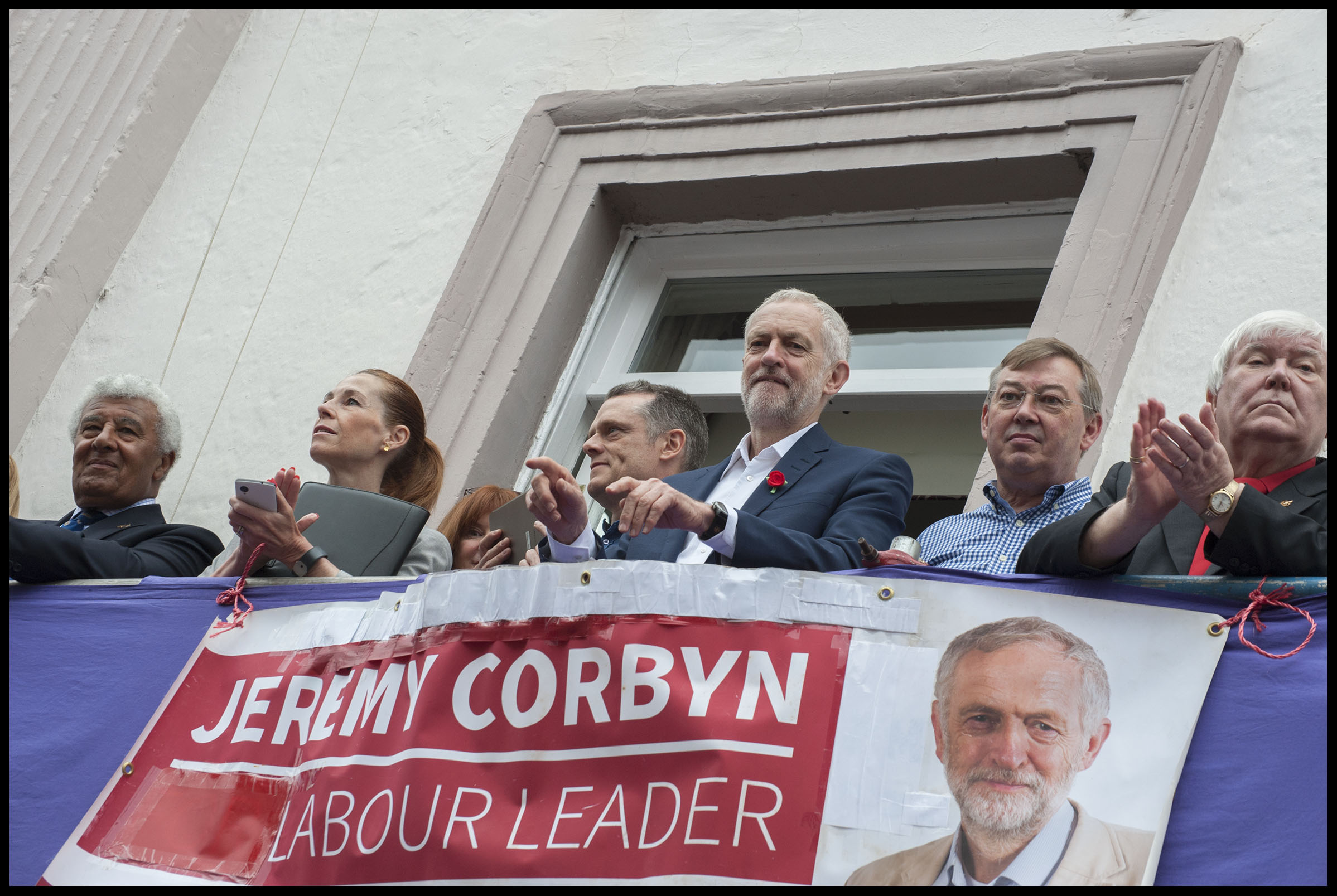 Editorial of the Socialist, issue 910 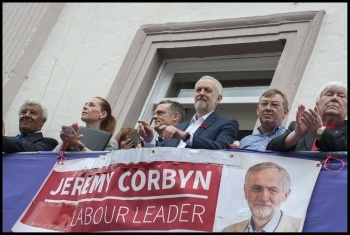 Step up the campaign to back Corbyn’s fight

Who controls the Labour Party: Labour MPs or the party’s half a million members? With a majority of the Labour MPs refusing to accept Jeremy Corbyn’s leadership and now mobilising behind a leadership challenge, this has become the critical key question.

Less than a year ago Corbyn won the leadership of the party by a landslide. But in the aftermath of the EU referendum – when the detested Tories have been more vulnerable than ever – first came the sabotaging no-confidence vote in Corbyn by 172 Labour MPs and then Angela Eagle declared herself a candidate to replace him.

Then the right wing had a concerted campaign to try to push Labour’s national executive committee (NEC) into refusing to allow Corbyn to stand for his present position without being required to get nominations from 20% of the Labour MPs and MEPs as his challengers must do.

It is a victory, reflecting the enormous pressure from Labour Party members and trade unionists to allow Corbyn on the ballot paper, that this completely undemocratic attempt to remove him from standing has been defeated.

Obtaining those nominations would have been a near impossible task for Corbyn in the present Labour parliamentary line-up, so many in Labour’s right wing were keen to remove him from the leadership that way. But others feared being seen as making a mockery of democracy and receiving a huge backlash from party members if that route was taken.

Nonetheless the battle is not over. Labour’s right wing, with the backing of the capitalist class, remains determined to defeat him. Jeremy Corbyn could still possibly face the nominations obstacle being ordered by court action taken by Blairites.

The pro-capitalist Blairites have shown that they are prepared to act brutally and decisively to force him out; the worst possible response to that would be to capitulate. In that event Jeremy Corbyn must refuse to accept such a decision and would need to launch an immediate massive campaign of opposition to it, including convening a special labour movement conference involving all his supporters.

Opinion polls suggest that with Jeremy on the ballot paper he will win the leadership vote again. But this can’t be taken for granted because the many Labour councillors, MPs, lords and officials who are desperate to see him removed will pull out every stop they can to defeat him, backed up by the big business owned media.

The orchestrators of the anti-Corbyn campaign – including the likes of Lord Kinnock – have been organising a recruitment drive to Labour of their own, encouraging people to join who will vote against Corbyn. Under these circumstances the instincts of many workers will be to sign up to vote for Jeremy.

But to try to reduce an influx of Corbyn voters, while last time anyone could sign up to become a ‘registered supporter’ for a £3 fee and have a vote, Labour’s NEC has this time removed that opportunity. It has been reported that there will only be a two day period to sign up as a registered supporter and it will cost £25; and all those who have joined Labour in the last six months will not be eligible to vote!
These last minute rules pushed through by the right wing must be challenged.

The MPs who have been baying for Jeremy’s resignation accuse him of placing the party in jeopardy of a split by not meekly submitting to their demands. Meanwhile, while they play up their professed concern for party unity, there have been plenty of reports seeping out from behind-the-scenes discussions among them of preparations for a new party based on the Parliamentary Labour Party. 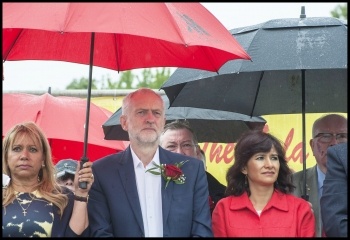 With justification, most supporters of Jeremy Corbyn in the labour and trade union movement believe that unity in the Labour Party on the basis of democratic decision-making and an opening up of the party’s structures would be the best way forward. But the political fault-lines are increasingly irreconcilable – this is fundamentally a battle between those in the party who represent big business interests and those who want to represent the 99%.

The question only has to be asked: unity around what programme? The Corbyn-hostile majority of Labour MPs and councillors want a Tory-lite programme of ‘kinder’ cuts. Angela Eagle claims to stand on the anti-austerity left, as any other challenger to Corbyn will no doubt also do. But she voted for the Iraq war, and against an inquiry into that war, and for university tuition fees of £3,000 a year; and has no reputation as an anti-austerity champion.

The contrast between her position and Corbyn’s was shown when she only received 16% of the first preference votes in Labour’s deputy leader contest last year, while Corbyn gained 59.5% at the same time in the vote for leader.

Today her campaign opening gambit that she is “anti-austerity” is designed not to be elaborated on, because incredibly she also declared that she won’t challenge Corbyn over policy. Knowing the unpopularity of the many shades of austerity-backing MPs, rather she decided to attack his leadership ‘competence’.

However, this battle – which began the moment Corbyn was elected – is not centrally about character and media skills but is precisely about policy and which class interests the candidates reflect. Far more important than Corbyn’s personal attributes is his opposition to privatisation, outsourcing, tuition fees, austerity, war, and all the other policies that made New Labour barely distinguishable from the Tories and led to a massive decline in the Labour vote.

The EU referendum result graphically showed how millions of workers are desperate for an end to the constant erosion of living standards. Since the post-referendum attacks on Corbyn, a reported 125,000 people have joined the Labour Party, with a substantial majority of them most likely supporting his policies.

Reports are growing of rebellions against the right wing in local Labour parties, such as in Brighton and Hove, where Corbynites won the leading positions. Even Eagle’s own constituency Labour Party – Wallasey in Merseyside – passed a motion supporting Corbyn and has asked her to back him. And importantly, there are growing calls from the party’s rank and file for the right to de-select MPs who don’t reflect the views of party members. 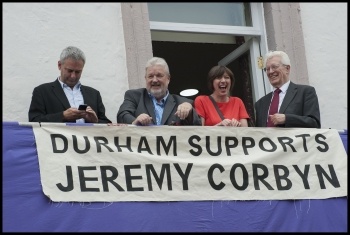 Events have shown – leading up to the fever pitch of this latest assault on Corbyn’s position – that there can be no more bowing down to the Labour right-wing by Corbyn’s supporters at the top of the Labour Party and Momentum. Instead the determined organising of the right wing must be met by mobilising the strongest possible defence and a politically offensive response.

To aid this battle, the Socialist Party has been participating in discussions on the way forward with many others in the labour movement throughout the country, and we have called for the left trade union leaders to organise an urgent conference open to all who support Jeremy Corbyn in the trade unions, including those not affiliated to Labour, Labour Party members and socialists outside the Labour Party.

In the 1980s, we, as the Militant tendency in the Labour Party, led the successful mass struggle of Liverpool council against the Thatcher government’s funding cuts. To those who today fear that Corbyn could be ‘unelectable’ in a general election, we draw attention to the soaring of votes for Liverpool Labour Party during that struggle, illustrating the huge popularity of a serious anti-cuts fight.
That indicates how a Corbyn-led anti-austerity party today could inspire voters to turn out in a general election, providing its leadership stands firm on anti-cuts and socialist policies in the face of a ferocious establishment onslaught against it.

Organise resistance against Blairites and Tories

This version of this article was first posted on the Socialist Party website on 12 July 2016 and may vary slightly from the version subsequently printed in The Socialist.