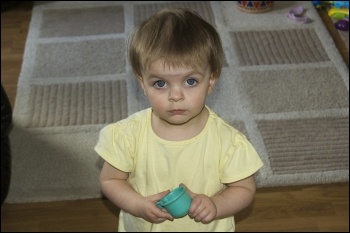 A YouGov survey earlier this year reported that four out of five teachers in England and Wales see children arriving at school hungry. These damning statistics show the abject failure of capitalism to provide a decent standard of living for the 99%.

In response to these rising levels of deprivation, Work and Pensions Secretary Stephen Crabb stressed the importance of understanding "the root causes of poverty". His career as a Tory politician revolves around enforcing them! Ceaseless austerity, privatisation and welfare cuts cause immense suffering for ordinary people, transferring wealth from the poorest and most vulnerable to a tiny super-rich minority.

Many Tory policies are a direct attack on poor families, making it an increasingly difficult struggle for parents to provide for their children.

Children - and all working class people - deserve a life free from poverty. The Socialist Party calls for an immediate £10 an hour minimum wage, secure jobs and housing for all, and the reversal of all austerity and privatisation.

We link this to the need for a fundamentally different society, run in the interests of the working class. Only by fighting for a socialist world can we permanently end poverty.